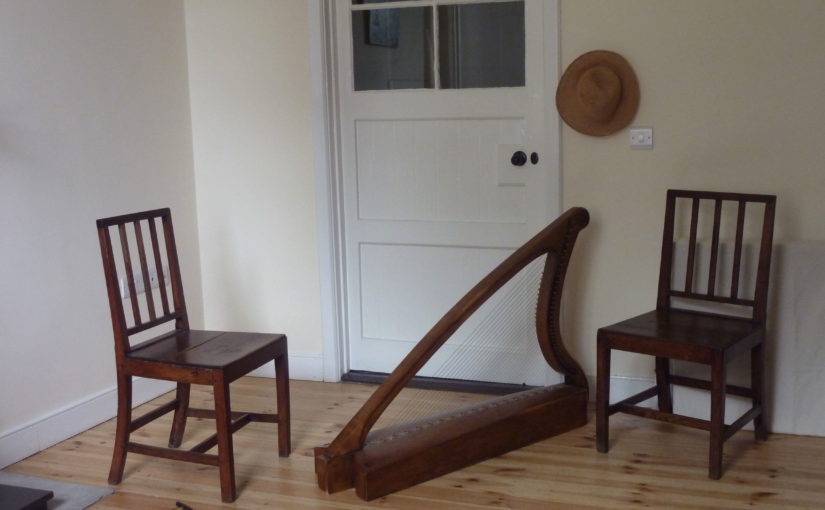 I made a demonstration video of Tá Mé Mo Chodladh, from Edward Bunting’s live field transcription of the playing of old Irish harper Hugh Higgins in 1792.

We can check my transcript of the text in ms29 to see that, above the notation, Bunting has written the title of the tune:

Pádraigín Ní Uallacháin suggested to me that this can be understood as a phonetic attempt at “Tá mé mo chodladh, nár dhúisce mé” (I am asleep, may I not awaken).

Below the notation, Bunting has written

It’s very unusual for Bunting to give us provenance or date information in his transcriptions. Normally we have to collate provenance information from later piano arrangements or indexes, which can be contradictory or unreliable. Of course, we can’t be sure that this title and attribution were written onto the transcription page at the time – nothing is certain in Bunting’s manuscripts!

Bunting’s notation on p.28 is unusually detailed and clear for a 1792 transcription. He has not barred the tune, but he has written in note stems and beams to indicate the rhythm. Unfortunately he seems to switch his note durations, sometimes writing crotchets and quavers, and sometimes writing quavers and semiquavers. He clarifies his thinking on the facing page 29/29/38/f14r. This edited copy is perhaps a little closer than usual to the transcription, but he has still made edits, omitting some of the notes, and expanding some of his “tr” or “+” marks into little notated note clusters, which may reflect Higgins’s harp practice, or may alternatively reflect Bunting’s piano imagination.

In my demonstration, I have used two different fingerings for these trills or ornaments. The trills or ornaments on E (bars 7, 15, & 31) can easily be fingered 2-1-2, which is cúl aithris in the table of “graces” (1840 intro p.25). However, I found this less convenient for the trills or ornaments on B (bars 4 & 12), and there I have used 3-2-4 which is not in the table of graces. I rationalised it to myself as a variety of barrlúdh, although the bárrludh gestures seem to rise up to finish on the upper note. Interestingly, the very next page on ms4.29 shows a live transcription of Burns’s March, which also includes a similarly shaped ornament (system 2, notated f-a-f) which is in a position where 2-1-2 fingering (cúl aithris) does not work very well. We have usually assumed this notation of Burns’s March is transcribed from Denis O’Hampsey, but I am now thinking that it is not in an O’Hampsey group, and it is noted one note up, whereas all of O’Hampsey’s transcriptions are noted at pitch. I have wondered before if this transcription of Burns’s March might be from Higgins; and so it is notable that this unusual ornament matches.

Bunting made a little note to himself on p.29, writing “major” above bar 17 where the flat 7th first appears. I am starting to seem more of Bunting’s naivety about this music in 1792 transcriptions, and a greater confidence in the 1796 transcriptions. (see Bunting’s collecting trips for more about these different tours).

Bunting did not take this transcription any further; as far as I can see he did not develop this version of the tune into a piano arrangement in any of his manuscripts or books.

Higgins was later described by Arthur O’Neill, in his Memoirs: the first draft is QUB SC MS4.46 p.16, and the neat revision is QUB SC MS4.14 p.20. The two texts are slightly different, and O’Neill seems to be talking a bit sideways, but he tells us that Higgins was from a respectable family in Tirawley, Co. Mayo. His mother’s name was Burke; he was blinded early on and his parents sent him to learn to play the harp. He did extremely well at his studies and became an excellent harper: “one of the best I ever heard” says O’Neill in ms4.14. Higgins had “genteel manners”, and travelled in the style of a gentleman, with a servant boy; he “spared no expense” on his clothes, but because he was blind he had to trust his boy to choose the colours.

I have not yet properly investigated Hugh Higgins. From looking at my ms29 text transcript and my tune list spreadsheet I notice that there are groups of tunes transcribed live from Higgins by Edward Bunting in 1792. (Higgins died in 1796, so presumably missed Bunting’s ’96 collecting tour). There is this possible group around Tá mé mo chodhladh on p.28, including Toby Peyton on p.26, and perhaps also Burns’s March on p.30 and A chailíní, an bhfaca sibh Seoirse on p.32. There is another group from p.78-90: Mild Mable Kelly, Sliabh Gaillean (Slieve Gallen), Cupán Uí Eaghra (O’Hara’s cup), Caitlín Ní Uallacháin (Kitty Nowlan), Thugamar féin an samhradh linn (with variation), Rois Dilloun / Young Lady Dillon, and Dr. Hart.

Perhaps most intriguing is the notation of Sliabh Gaillean on page 80-81. Page 81 has the unusual variation with a melody played in the bass register. Underneath this, Bunting has written the scale of a harp, and marked out the “sisters”, and the “right hand” in the bass and the “left hand” in the treble. Does this give us the gamut of Higgins’s harp, and did Bunting note down this scale as part of noting down Higgins’s bass variation to Sliabh Gaillean?

Tá Mé Mo Chodladh is a lovely traditional song air. There are variants known in Scotland, and there are other related tunes and songs. For our purposes it might be worth noting two other variants of this tune.

As well as his live transcription from Hugh Higgins in 1792, Bunting also made a live transcription, apparently from the playing of Denis O’Hampsey, possibly in 1796. This transcription is on Queen’s University Belfast, Special Collections, MS4.29 page 171/169/178/f84r. It is titled “Tame ma Collad na Duss”, which Pádraigín suggests represents “Tá mé mo chodhladh ná dúis…” (I am asleep, let me not…)

You can see that it is done in a very different writing style, which suggests to me Bunting’s 1796 collecting trip(s). It is also in section 3 of MS4.29, but I don’t know that the sections of the manuscript are organised chronologically at all. This transcription has a lot of notes marked “B” which represents bass notes. In 1798, Bunting developed this p.171 transcription into a piano arrangement (QUB SC MS4.33.3 p56-7) and he writes there, “This setting is exactly set <copied> from Hempson – both Bass & Treble”. Of course it isn’t, as it is a piano arrangement in the key of f major, but it does have spare bass octaves in exactly the places where he has “B” marked in the transcription. There is a more developed piano arrangement frim the 1830s in MS4.27, where it is tagged Dennis a Hempson, Magilligan, 1796; and the published piano arrangement in 1840 is labelled in the index Hempson, Magilligan, 1792. (for all the fame of Bunting’s published books of piano arrangements, there are very few recordings of his arrangements being played on the piano, and I can’t find one at all of Tá Mé Mo Chodladh, no.100 in 1840)

I also was interested to consider a traditional recording of Tá Mé Mo Chodladh as an instrumental slow air. This is Willy Clancy in 1969:

Charlotte Milligan Fox published notation of a similar version, collected by her from “Piper Kelly, an old musician who wanders round the North of Ireland… he said this lament was given to him by “ould Jimmy Joyce, a Galway piper” who had been to the Belfast Convention of Harpers in 1792″.

I would say that Higgins and O’Hampsey are much closer to each other, but rather different from Clancy & Kelly, who are much closer to traditional song versions. But I think that O’Hampsey is also “squarer” than Higgins, that Higgins has potentially more of the flavour of Clancy & Kelly. The main difference I am hearing between the harp versions, and the pipe versions, is that the pipers have a sharp 7th whereas the harpers have a flat 7th. I don’t know if this is because of the pipe scale, or if the pipes are following singers, or what the reason is.

Again, I wonder what the connection is between the performance style of our harpers a bit over 200 years ago, and this piper, a bit over 50 years ago. If Bunting tried to make a transcription of Willie Clancy’s playing, and then worked up his transcription into a piano arrangement, what would he end up with? Should we try to understand and interpret the 1792 transcription from the playing of Higgins, through an understanding of Clancy’s recording?