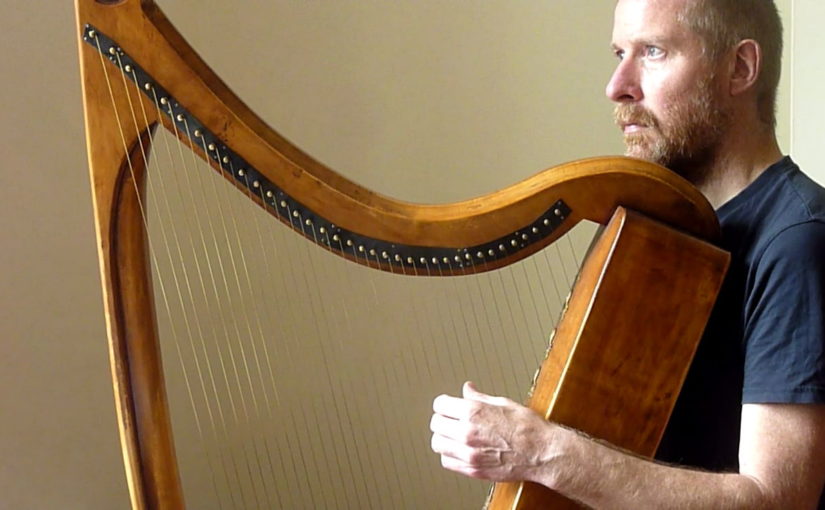 I made a demonstration video of the song air, Cúileann fín (fine, fair-haired one), from Edward Bunting’s transcription apparently made in in the summer of 1792 from the harper Hugh Higgins.

I am playing from Edward Bunting’s notation which he wrote into one of his collecting pamphlets, now bound up as Queen’s University Belfast, Special Collections, MS4.29 p.96/92/101/f45v.

This notation looks like it may well be a live transcription, overwritten with edited note values and barlines. Bunting was struggling with the rhythm, as he inserts bar lines and numbers, and he adds unnecessary rests to try and get a handle on the rhythm. He has marked big + signs above the first half of the tune; these are not ornaments, but show which are the “correct” numbered bars, allowing us to ignore the un-crossed bar-lines. Actually I think it would be more appropriate to have the extra bar lines, allowing to be in 3 time instead of the 6 time of the manuscript notation.

The previous page 95 has a fragmentary dots only notation of the beginning of this tune. The first phrase is clear, but the second phrase goes off in a strange direction. Did Bunting mis-notate this so badly that he turned the page and started again?

The tune is in G major, with F♯ tuned on the harp. There is a repeat mark for the second half, implying that it is a six-phrase (or six line) tune.

Above the p.95 dots Bunting writes “Coolin fin”. He also writes “Doctor Mac Donald / Market Street” which may be unrelated; and on that page he also has a second, unrelated tune, titled “Black bird & thrush / in C♭♭♭“.

On page 96 Bunting has written above our tune “Fair head of hair / Coolin Fin” and then below the tune he has written “she sude shear an rode demish she”.

However, since I am talking about this tune, we should consider the other versions, and this is where it all gets very complicated. I will try to lay out all of the different information, and then at the end we will try to pull together a little summary about the different versions of the tune.

At the top of page 96, Bunting has written “Turn over to No. 71”. If we do turn back to page 71/67/76/f33r then we can see that Bunting has made a copy of a different version of the same tune. It is titled “Shea sude shear an Rode a Dimashee” and is tagged “ditto” which relates to the previous page’s tag: “printed book”. This is a whole run of pages from 67 to p77 which Bunting has copied directly out of John and William Neal, Colection of the most celebrated Irish tunes (Dublin 1724).

Neal’s publication is the first book of Irish tunes published in Ireland; the tunes in it are all what I would describe as baroque fiddle or flute arrangements.

Bunting later owned a copy of the Neal 1724 book; but when he was copying tunes into ms4.29 he only had access to another, damaged copy (he marks sections “tore out” on some pages). Bunting’s copy survives in his papers (QUB SC MS4.31.2). He signed and dated it “October 31st 1794” which perhaps was when he acquired it. So that would suggest the ms4.29 hand-copies from the (lost) damaged copy were done before then, probably in early summer 1792.

If we assume that the dots on p.94 and the full version on p.95 are related and part of the same transcribing session from the same harper, there are nonetheless two other independent transcriptions of this tune.

On page 71, at the bottom of the copy from Neal, the final line of notation is in a slightly different style and looks like it could be a transcription. It may alternatively be a copy from a different manuscript or printed source. Either way it gives us a different version of the tune. We could compare this with p.69 where Bunting has inserted what looks like a transcription underneath his hand copy of a Neal tune, saying “This the same tune as above”

The third transcription is part of the very important series of live transcriptions apparently made by Bunting from the harper Patrick Quin, some time around 1802 to 1806, and preserved upside-down at the back of his Westport 1802 notebook (QUB SC MS4.33.1). Quin’s version of the tune is titled “sion sios a rod dimigh[si]” and has quite a different curl and style from the others.

In 1798, Bunting made a piano arrangement as no.44 in his unpublished “Ancient and Modern” collection (QUB SC MS4.33.3 and MS4.33.2). The tune is on MS4.33.3 p.60. It is a composite version; the first section up to the double bar line is derived from the possible transcription version at the bottom of MS4.29 p.71. After the double bar line is based on the Neal 1724 printed version, like a kind of baroque variation. Bunting’s title for this piano arrangement is “Sud siar a ród a dimighsy – There’s the road she went – very anc[ient]”. Under the first line he writes “Allegro This tune to <be> sung Slow from B. Billy” and at the bottom of the page he writes “from Higgins – also from Arthur O Neil”

There is another piano arrangement in QUB SC MS20. I haven’t seen this manuscript; Colette Moloney lists it in her Introduction and Catalogue (ITMA 2000 p.293) and gives the first four bars. These are almost identical to the 1798 arrangement in MS4.33.3.

Bunting printed a piano arrangement of this tune on p.40 of his 1809 printed book. His piano arrangement is a similar composite to the 1798 arrangement, but with a more developed second part. He did not write an attribution into his annotated copy of the 1809 printed book, but he did write an explanation: “A lover’s sorrow for the departure of his mistress in which his sorrow breaks / out at intervals of the tune / wants 7th in all but 2 places”.

I think “Coolin fin – fair head of hair” must be an alternative title for this tune. The start of the second line of Lynch’s words is “Cúl na bhfáinniugh” (curly head) (see below). Bunting includes the title “Coolin Fin” in a number of tune lists in MS4.29 and I have not found another tune with this title. Donal O’Sullivan (DOSB 97a) gives another song “Cúilín fáinneach” which seems to have the same metre and structure as our tune. It is in another neat Lynch manuscript (QUB SC MS4.10 no.112/160/f79r) but there is no reason to think it is actually connected to the p.96 transcription.

There is a full transcription and translation in DOSB part V, and in Nicholas Carolan’s Neal.

Attributions to named harpers and singers

I’m trying to collate the title lists in Patrick Lynch’s journal and in the index to his song book, but I haven’t yet found the cross-reference to associate these words firmly with a singer. In his Journal, QUB SC MS4.24 p.053, Lynch lists songs collected from blind Billy O’Malley in June 1802. This song is not listed, but many of these songs are found in the neat copies in MS4.7 in approximately the same order, and in MS4.7 “Súd é sios an rod a d’imigh sí” is in about the right place to have been collected from O’Malley. However more work could be done on Lynch’s manuscripts to properly collate all the variants and references.

For the tunes, we have only the information from MS4.33.3 p.60, where Bunting tags his synthetic piano compilation version “B. Billy”, “Higgins”, and “Arthur O’Neil”.

The “p.71” version of the tune on MS4.29 p.71 line 5 was probably written in by Bunting presumably after the rest of the page was made, but before he incorporated this version of the tune into his MS4.33.3 piano arrangement in 1798. So we could date this first transcription to 1792-8.

The “p.95-6” version of the tune on MS4.29 p.95-96 seems to sit in a group of Higgins tunes, and also shares that early style of notation that seems a little awkward, so I suggest this transcription may have been made by Edward Bunting from Hugh Higgins in the summer of 1792.

The song lyrics written in MS4.7 no.173 were taken by Patrick Lynch from a singer in or near Westport summer 1802, possibly from Blind Billy O’Malley.

Possible history and provenance of the different versions

So, when Bunting came to make a piano arrangement, in 1798, he took the “p.71” tune , and then added on the second and third parts of the “Neal” version to create a synthetic combined piano arrangement. He wrote at the bottom of the page, as usual in this book, attribution tags; for this combined setting he wrote “from Higgins – also from Arthur O Neil”. Presumably in ’98 he remembered having heard Higgins play the tune in ’92, and also remembered hearing Arthur O’Neil playing it.

Then after going to Westport in summer 1802, Bunting must have heard Blind Billy O’Malley singing the song, and he then went back to his ’98 piano book and deleted his time indication “Allegro” and wrote the tag “This tune to be sung slow” and the tag “from B. Billy”.

I will add that as a guess to my Old Irish Harp Transcriptions Project Tune List spreadsheet.

The two versions that look like live harp transcriptions are this possible Higgins version on MS4.29 p.95-6 which I am playing in my demonstration, and most important of all, perhaps, Quin’s very beautiful and quite different setting in MS4.33.1