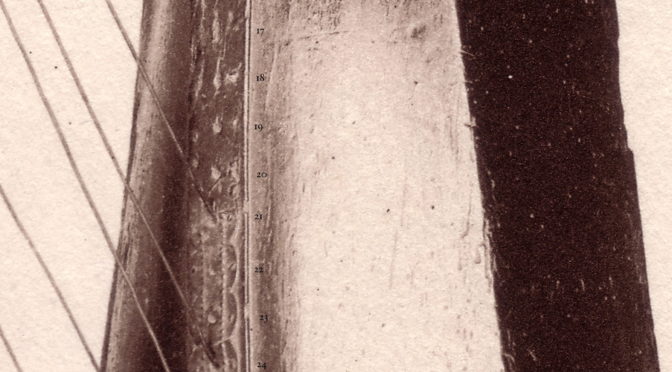 While working on something else I came across this from last year which I had meant to write up.

Understanding the tuning and stringing of an old harp requires knowledge of string lengths and angles. This basically means measuring between the tuning pin and the little hole in the soundboard where the string goes in. But Ann Heymann pointed out to me years ago that on the Castle Otway harp, you can’t see a lot of those holes, because the metal strap down the middle does not line up with the string holes in the wood.

Last year, Natalie Surina was inspecting and documenting the Otway harp in Trinity College. As part of this work she got permission to use an endoscope to look inside the soundbox through the tiny triangular cut-outs in the soundholes. She was able to note the ends of the nails which fix the brass strips on, and it was possible to collate the holes visible in the wood, with the position of the nails.

I wondered if this evidence from inside, with the visible holes and nails, could be collated with the nail heads visible on the outside, to draw a kind of map of the holes and how they are hidden underneath the brass strip.

I also looked at the first edition of Robert Bruce Armstrong’s book, which has extremely high quality photo-lithograpic images of the old harps. I was quite surprised to see that most of the brass strip was missing in his images. The strip we see now must have been fixed on after 1904.

The underlined red numbers show where the strings are in Armstrong’s photos. I believe 17 is the highest hole where the hole in the metal lines up with the hole in the wood, but really I am guessing about the exact relationship between wood holes and metal holes. The red rectangle represents an inserted strip of wood, presumably repairing damage to the soundbox. This inserted strip is visible both through the endoscope inside, and on Armstrong’s photos of the exterior.

Armstrong tells us that there are 35 string-holes in the wood, but I don’t think no. 1 is visible in either of Armstrong’s photos, or in Natalie’s endoscope. My numbering therefore runs from 2 to 35. It is possible that there is a hole high up that I cannot see. I don’t have a good modern photo of the top of the brass strip; I should check next time I am in, to see if hole 1 in the wood, is visible in the semicircular semi-hole 0 in the metal strip.

In Armstrong’s photos, the brass strip is present in the bass, as far up as the join at hole 21. Above this there is no strip present. I wonder if the strip was removed, or fell off, at some point. I note the splits from metal holes 19 and 20, as if the string had cut into them – if the strip were mounted the other way around. I also note that the strips above hole 21 have very few nails, with little bumps imitating the positions of nails on the lower strips. Were the strips above 21 taken off at some point and folded up and stored inside the harp, to be found and replaced some time later? Or were these strips made new to decorate the harp in the early 20th century?

Why do these midrange and treble strips not line up with the holes in the wood?

The endoscopic view inside is not calibrated at all, and Armstrong’s photos are at funny angles and so can’t be easily measured. I don’t even know if an X-ray or CT scan would show the holes in the wood, because of the interference and shielding of the metal strips. I suppose that until the harp is conserved and/or repaired, with the back removed, we have no way of measuring the positions of these holes – I would think a calibrated laser-scan of the inside of the soundbox cavity would be the best way to measure their positions.

This also means that none of the so-called replicas of the Otway harp made so far can possibly reproduce the string lengths and geometry of the original; and even a new replica taking these observations into account can only be approximate, until we have a way to actually image and measure the string hole positions. The holes in the metal can never have represented the actual string positions of the harp, since strings cannot be fitted to them – there is solid wood behind them!

Thanks to Natalie Surina for discussing the interior views and for other information. Thanks to Karen Loomis for access to her first edition of Armstrong. My image at the head of this article shows a detail of the first edition photo-lithograph, showing the missing strip above hole 21.