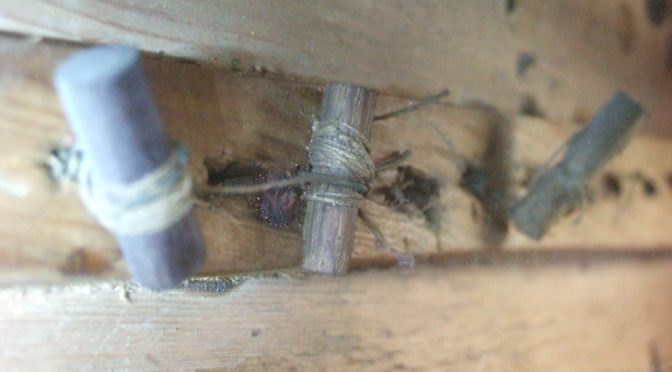 The word ursnaidhm (and variants) appears in Bunting’s 1840 book, where it is also translated “The wooden pegs to which the strings are fastened”. Today I was restringing my Student Downhill harp with only four gauges of wire, and I thought I would experiment with the toggle windings, following the historical evidence.

Karen Loomis discussed this a bit in her thesis (volume 1 p.39-42). The toggle knot extracted from one of the string holes on the Lamont harp has a tight wind, as if it were made on a 1.5mm metal toggle. The string goes down, winds round the toggle one-and-a-half times and then a long end about 1cm long is left.

Karen mentions how most people today use the knot described by Ann Heymann in her book Secrets of the Gaelic harp (1988). I remember trying to do simpler knots, but finding that if you coiled the end of the wire tightly around the standing end, the string tension would tend to uncoil it. I think that leaving a long straight end is an interesting way to potentially resist such uncoiling. But on its own it still isn’t enough; you need something to stop it unrolling itself.

On the Malahide 1 harp, there are a number of toggles inside the soundbox stuck in the string holes. There are some different winds; one clearly has the string going round the toggle twice. One has a coil of wire around the standing end of the string. A couple clearly show the wire twisted under itself, a little like the traditional method for knotting gut harp strings. All of these toggles also have thread wound tightly around and over the wire winding on the toggle.

Karen Loomis spotted a toggle suspended inside the Hollybrook harp. It has the wire going once round the toggle but no turn back or twist is visible. I have not seen inside the back of this harp. I don’t know how old these strings are.

In the Rose Mooney harp, the strings go once round the toggle but no turn or twist is visible. I don’t know how old these strings are.

I would like to see the toggles inside the V&A harp, as I suspect these strings are old.

When I was restringing my HHSI Student Downhill harp today, I started with the Malahide style, with a twist. But in the end I took a leap of faith and did some with the Sirr style single turn. And they hold fine. So I will update my instruction sheet for toggle winding at once!

I was finding that the highest strings (0.48mm) needed the Malahide style twist to stop them unwinding. But from the octave above na comhluige, down to the bass, the Sirr style single turn holds well.

I did try the Lamont winding, but it won’t hold against string tension – it just unwinds. And I tried a wooden toggle the same, without the turn back around the standing end. The lack of a turn means the string comes off the toggle at a tangent, not radially, and so the whole thing just kind of unrolls. So I wonder now what the Lamont wire fragment represents?