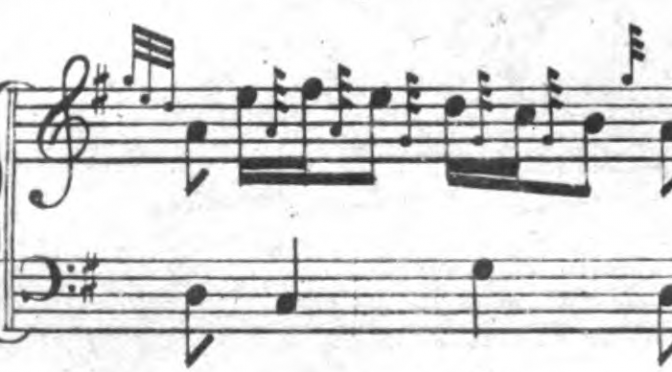 Today I tried playing the Lament for Ranald MacDonald of Morar on the harp, and I discovered two very interesting things about this tune.

First, it really does not sit well on the harp.

Secondly, it is a minor-mode tune. The notation gives it in a, as is usual for Highland bagpipe music, as the pipes usually play an a major scale: a b c# d e f# g a, plus low G, with drones sounding all the while on A.

This tune is mostly pentatonic, moving over g a b – d e – g a, with passing notes on f# and on c natural. The c natural is not at all what one would expect to hear in a pipe tune, yet not only does c# sound very wrong but the notation clearly gives only one sharp in the key signature.

Listening to the only pipe recording I have to hand (and ignoring the substantial changes to pulse and accent) I note that the issue doesn’t arise on the pipes, because the sequence that Donald MacDonald writes very clearly as d (G) c (G) b, i.e. a descending series of 3 notes d c b, separated by low G gracenotes, becomes in modern performance d G(c#)G b, i.e. a sequence of two notes d  b separated by a burble on low G. So the tune remains pentatonic on the pipes.

I checked in Joseph MacDonald‘s book, where he has a section on the “keys” in which ceòl mór is set on the pipes, he doesn not really deal with this type of scale; he only talks about laments omitting c# and concentrating on the low end of the scale. Other than that he is mainly interested in music set in modal equivalents of g major, a major and d major.