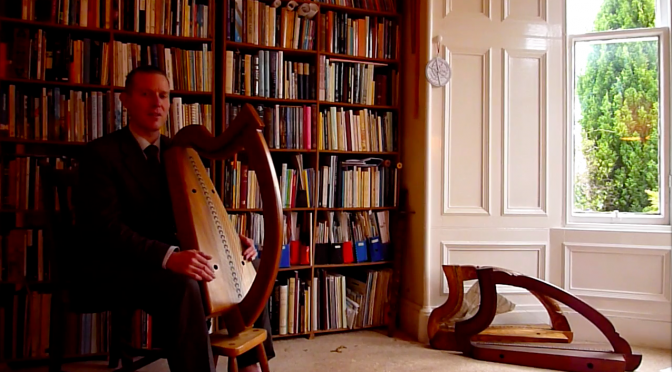 Over the years I have been less and less satisfied with this solution. All of the Trinity -style harps that have used this kind of scheme have either had significantly longer treble strings, allowing a better voice, or have sounded frankly a bit rubbish in the upper mid range and treble. I realised that I was not playing very much in the high treble range of the harp because of the poor tone from the under-tensioned strings.

However I was also interested in how this could translate to a 2 metal solution using brass and silver. It is clear that a higher pitch is required if the brass trebles and silver basses are to speak cleanly.

I was somewhat influenced by Paul Dooley’s GSJ article, and Karen Loomis’s PhD thesis, but I think they both go too far in the other direction, specifying impractically high pitches for the brass strings. I believe the strings of an Irish harp speak best at significantly below their maximum tension, but exactly where they speak best might be a case of trial and error.

The other thing that influenced my new scheme is my ideas on how we might compare the 18th century Irish harp gamut, with sub-bass strings, and cronan G, and na comhluighe g, and with the F strings movable to give either f sharp or f natural, on one hand, and the medieval Guidonian gamut on the other, with the shifting sonority at b natural and b flat. My solution is to throw out the idea that cronan G and Gamma Ut are the same; I have placed Gamma Ut three notes lower than cronan C, so that na comhluighe is on middle c’, as suggested many years ago by Alasdair Codona.

I never restrung my replica Queen Mary harp like this for various reasons; I love the all-silver and gold decadence, and I did not want to jeapordise the fragile gold bass strings by removing them. But when my HHSI Student Trinity came back here I knew that this was an easy chance to test these ideas.

Here are my Youtubes for before and after.

I am sorely tempted to recommend this new regime for any and all copies of the Trinity College and Queen Mary harps. The disadvantage is that they will then no longer match the 18th century harps such as the Downhill or the Mullaghmast. But on the other hand, I think that they should not. I don’t think people should expect to easily play the 18th century Irish harp repertory on a replica medieval harp. Using this scheme would highlight that the repertory and idiom of the medieval Gaelic harp is not the same as the repertory and idiom of the 18th century Gaelic harp.

What do you think? Would you restring and retune your Trinity or Queen Mary copy according to this new scheme?