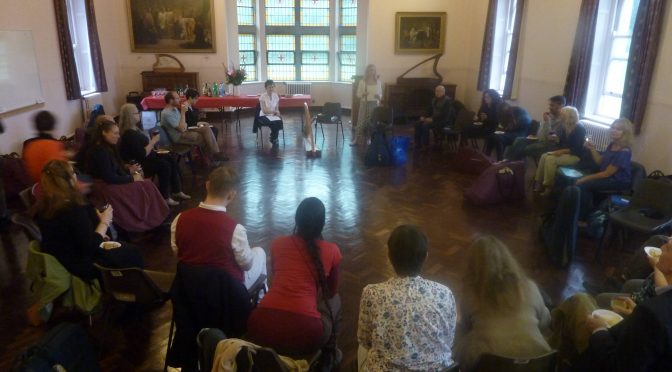 I was in Kilkenny the other week, for the fourteenth annual Scoil na gCláirseach – summer school of early Irish harp. During the week, I explored some of the issues I have been working on so far this year, namely the new setup for the medieval Gaelic harps, and the issues of using fingertips instead of long nails for playing the 18th century Irish harp repertory.

My talk on medieval setup, and my workshop on medieval repertory, were suprisingly uneventful and uncontentious. Though no-one leaped to restring and retune their harp, I think that there were enough people intrigued enough and convinced of its plausibility to go away and try it in the privacy of their own homes. Certainly, no-one voiced any objections to the ideas!

My ideas on fingernails and fingertips were a lot more divisive and disputed. I think because it is a more fundamental challenge to ideas of aesthetics and styles. I led the “sources” class in an exploration of the evidence, starting with the Lynch and Bunting quotes, then inspecting super-close-up photographs of Patrick Byrne’s hands, and working through the Banks of Claudy as an example of chordal and harmonic playing. Finally, we worked through the source notations of Seabhac na hÉirne, and Carolan’s Concerto, and concluded that every note of the earliest piano settings were plausible as examples of Arthur Ó Néill‘s playing style with finger tips.

Natalie Surina had completed and strung the first of the two Rose Mooney copies she has been working on. This large baroque Irish harp had been strung quite lightly at my request, so I could try playing it with fingertips. I had planned to play it at the opening reception, but in the end I was so overwhelmed with admin work that I was not able to. I did play it at the end of the week, to illustrate Natalie’s very informative and well-presented lecture on the process of researching and reconstructing the Rose Mooney harp. Siobhán Armstrong played the copy with fingernails, and I played it with tips. The audience were suprised that it was not much quieter with tips, but that the sound quality changed remarkably; the nail sound was much harder and sharper, while the tip sound was more swelling and wooly. There was some discussion of how this fitted the evidence, and how it suited the different harmonisation styles visible in the sources.

Natalie and others were dissatisfied with the low string tension, and when the harp was accidentally dropped, breaking the top octave, Natalie took advantage of this to thicken these higher strings. Although I had also worried that the harp was too lightly strung, I was surprised to find that the thickened treble was now too thick to sound good with tips. Of course, we still need to experiment more with the thickness of mid-range and bass.

The string spacing of the Rose Mooney harp was comfortable for fingertips, slightly wider than the Downhill or Mullaghmast, though not as wide as the Otway. I am thinking that a slightly wider spacing does help with sound production using finger tips.

It was odd to work so intensely on these issues, and then to go to the public concerts to see Arthur Ó Néill’s repertory presented with an old fashioned nail technique with minimal harmonisation, as if these new investigations had never happened!

The field trip on Tuesday last was inspiring as always, leaving me with a vivid visceral impression of the subtlety and beauty of the old harps. This year I tried to avoid organological detail, concentrating instead on the impression of seeing and experiencing the old instruments, and being aware of the vast difference in complexity between the old museum harps and even the best modern copies. We need to up our game considerably.

After the Scoil had finished, I travelled to Galway to help run the concert there, and shopped in Charlie Byrne’s bookshop, and dined in Péarla na Mara – a most wonderful triple-cooked seaweed dish. Then to Dublin for the concert at St Audoen’s, and finally a couple of days at Luggala resting with Garech Browne, and playing for his distinguished and discerning guests.

I videoed many of the lectures and presentatons, and so did the ITMA, so hopefully in time the videos will appear on the HHSI Youtube channel. You can see the complete unsorted photos on the HHSI Dropbox.