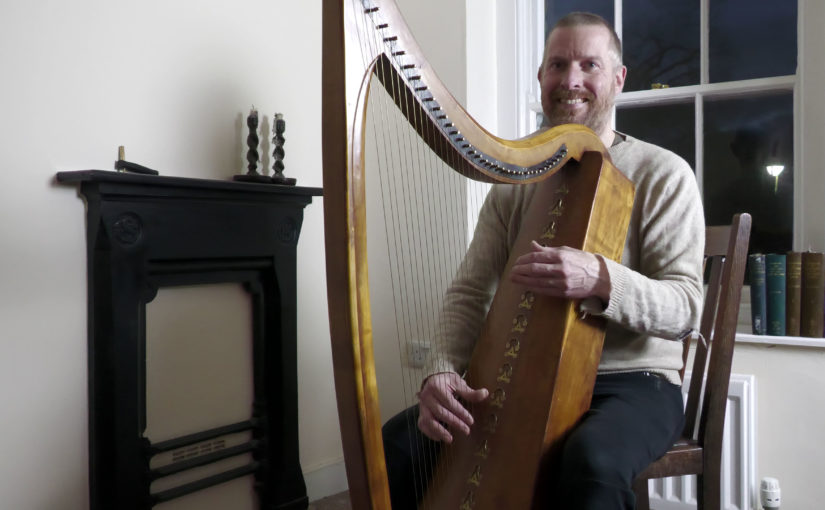 Edward Bunting made what looks like a live transcription of a harp performance of Bob Jordan, apparently in 1792. You can see the transcription notation at Queen’s University Belfast, Special Collections, MS4.29 page 162/160/169/f79v.

This notation seems to me to be a fairly competent live transcription. It is obviously developed from a first run through of dots; there are a few places where dots have been cancelled by big smeary lines through them obliterating them. Bunting has developed the dots notation with note stems, beams, barlines and bar numbers. He has also written a number of “B” notations indicating bass notes.

The repeat bar in the centre of the score might indicate that the harper played each part twice. However there is no corresponding repeat mark at the end and I am getting more and more confused about the significance of this :||: mark inbetween sections of a tune. The flow of the tune suggests to me that it runs all the way through without repeats but what do I know?

Bunting made a classical piano arrangement of Bob Jordan, and he included it in the proof sheets he submitted in London in May 1796 (see Peter Downey, …publication history…, 2017).

Bunting then repeated the same arrangement as no.59 in his 1797 book. You can hear a performance of Bunting’s classical piano arrangement on Fiachra Ó Corragáin’s website.

Bunting’s printed title is “Bob isordan – Bob Jordan – Carolan”. There don’t seem to be other versions of this tune.

In any case this must be a 1792 transcription, because it had already been arranged and printed for the Spring 1796 proof sheet, before Bunting went out collecting more tunes in the summer of 1796.

I have general questions about why some transcriptions, like this one, seem so clear and complete, while others are utterly corrupt. Did Bunting go from useless to competent over the course of Summer 1792? Were some of his informants patient and careful, showing the naive young Anglo-Classical urban pianist how the tune went, while others flew through their repertory not wanting him to follow too closely?

I tried to play through the transcription, following Bunting’s transcription notation. I don’t believe this notation captures all the nuances of the original harp performance by any means, and I am sure that there is a lot of subtle rhythm, expression and idiomatic handling of treble and bass notes that Bunting has missed or straightened out in his notation. But this will do as a tentative beginning to understanding this tune.

This transcription has a lot of old Irish harp style and idiom in it. However it is clear that Bunting’s transcription notation is either incomplete, or corrupt, or both, because there seem to be odd bits of the notation that don’t hang together or flow smoothly on the harp. We should expect that really, since It is impossible to capture every nuance of a live performance in notation transcription, and Bunting was an outsider without the conceptual tools to be doing ethnographic transcription and anaylsis.

One of the problems with doing the video demonstrations is that it crystallises these questionable areas. In this tune I am especially questioning of the B markings and the swapping up and down of the tune between the hands. There is obviously a lot of technique I am missing out on in both hands – the right hand bass notes obviously relate to the left hand fingering of the surrounding passages. My playing is very awkward and not convincing. But I think that trying to play through the transcription without interpreting it or changing it raises exactly these questions: by trying to get to grips with what the transcription is not showing us, we can come to a more nuanced understanding of what the transcription does show.