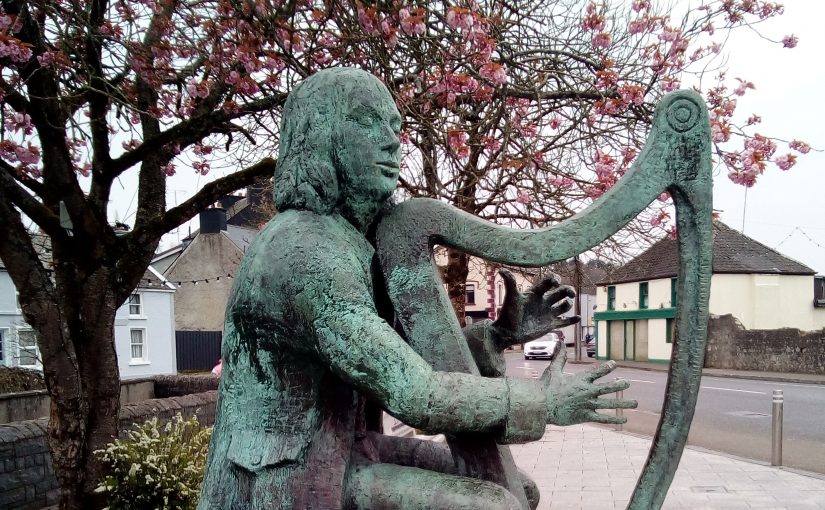 Edward Bunting made a two-page live transcription notation of a traditional Irish harp performance of the Carolan tune, Doctor Hart. I think this was done in 1792 from Hugh Higgins. You can see the manuscript pages online at Queens University Belfast Special Collections MS4.29 pages 90 and 91.

But before we look at the harp transcription, let us check out the other versions. Donal O’Sullivan, in his Carolan, notes two other independent witnesses to our tune.

Turlough Carolan’s son, John Carolan, made a harpsichord arrangement of the tune and included it in the book he published in c.1748. This is the “Carolan-Delaney fragment” which is now in the National Library of Ireland, with the shelfmark LO1635. We have Keane FitzGerald’s information about this book; “it was only after his [Turlough Carolan’s] decease, in 1738, that his tunes were collected and set for the harpsichord, violin, and German flute, with a base, Dublin, folio, by his son, who published them in London by subscription, in 1747”

John Carolan’s harpsichord arrangement is, quite frankly, a bit useless. The bass is incompetent, and the rhythm and barring of the tune seems all wrong. John Carolan gives the tune in two halves, with a double bar line separating them; he has 13 bars in the first half and 14 in the second half. One of his bars (8) has only 3 beats, though the tune is in 4/4, and I suspect that the whole tune should really be in 3/4 but has been mis-barred and so some notes also have the wrong time values to force the phrase endings into the bars.

John Carolan has put a key signature of three sharps; the tune seems to be in A major pentatonic mode.

I made a typeset PDF of John Carolan’s arrangement, and a machine audio, so you can listen to his version.

There is a version written out by piper James Cody. He was commissioned by Edward Bunting to write out tune collections between 1805 to 1809. In a neat tune book which he presented to Bunting, there is a nice version of our tune. The title is “Seághan ua Airt / Revd. John Hart / Cearbhúlann cct”

I would say that Cody’s version seems much neater and more straightforward, but it still has strange rough edges, and is also quite a lot shorter than John Carolan’s. Cody has set the tune in 3 time, and has 9 bars in his first half, including a strange double ending, and he has 9 bars in his second half as well. I have silently omitted what looks like a repeat mark at the mid point, because I think Cody uses the double bar line with dots simply as a section division, not to mark repeats.

Cody has put the tune with one flat, and it is in F major pentatonic mode.

I had hoped that looking at other independent witnesses might help us to understand the harp transcription, but unfortunately they both seem a bit off-beam.

Edward Bunting made what looks to me like a live harp transcription, on QUB SC MS4.29 pages 90 and 91. His title is “Doctor Hart” and he has written other apparently unrelated words around the margins: “Doctor” and “Wareham” at the top of page 90; what looks like “sunn” and “market” in the middle of p.91, and he has written “Dublin” at the bottom of p.91. “Radaran ioghnnes” is the title of an unrelated different tune, Radaire an uaignis, which he had copied out from the Neal printed book onto page 205 of MS4.29.

This is a pretty detailed transcription but Bunting has struggled to get the tune written down. I have made a PDF transcript of the transcription notation, and a machine audio. I have tried to follow the initial underlying transcription dots, ignoring Bunting’s re-writing as far as I can. You can see and hear that there are places where Bunting is very confused, and his re-writing straightens things up but does not necessarily accurately portray what the harper was playing.

The tune is written out in two halves, each of 16 bars. My PDF typeset numbers the bars the same as Bunting’s transcription, 1-16 for each half. In the first half, Bunting has mis-numbered bars 9-11, and he has re-written a neater copy of bar 11 on the facing page. But in the second half he loses the plot completely, and the notation turns into disjointed repeated runs of tiny notes from bar 5, and then degenerates into scratchy dots at the bottom of page 90 and the top of page 91. Bunting then makes a clean copy of this section (part 2 bars 5 to 12) at the bottom of page 91, before Bunting gets his act together and manages to finish the end of the tune neatly enough in the top right hand corner of page 91. In my PDF version I have tried to ignore the re-written copy sections as much as possible and work from the dots, though I have used the bar numbering of the replacement section to help me set the dots.

There are quite a few places where the letter B is written, which seems to indicate melody notes that are blatantly shifted down an octave or two into the bass register. In a few places Bunting has also used a bass clef to show this typical feature of old Irish harp style. When he writes “B” it is not always clear exactly which notes he has heard shifted down. Most enigmatic is the letter that could be “B” or could be “3” which is written above bar 6 of the first half. I am interpreting this as a letter B referring to one or more of the notes at the beginning of bar 6, though other interpretations are possible.

My conclusion from working through making this typeset version of the transcription is that it is corrupt, that it is not a simple matter to just play through this transcription on the harp. I think it is clear that Bunting did not do very well in his attempt to accurately transcribe the harp performance. We can see his heavy over-writing as his first attempts to salvage something from this corrupt transcription attempt.

Bunting has put the tune in G major pentatonic mode, which is a very normal and expected mode for setting the tune on the harp.

Bunting made classical piano arrangements which seem to be based on the MS4.29 transcription notation.

The first piano arrangement that we have, was apparently done in 1798, six years after the supposed date of the transcription. It is part of his unpublished “Ancient and Modern” piano collection. Bunting’s title is “Doctor Hart – by Signor Carollini”

The two little tags at the end are interesting. The attribution says “From Hugh Higgins – County Mayo”. I think this means that Higgins was from County Mayo, not that the MS4.29 field transcription was made there. The second says “These 2 last tunes are very middling hard to set Basses to”. I comment on this on my post about Cupán Uí Eaghra which is the tune on the previous two pages. I think this can be a red flag to us, in that I think if Bunting was struggling to find nice classical piano harmonies for this tune he would not hesitate to change the tune to fit classical norms. This 1798 “ancient and modern” classical piano arrangement is what Donal O’Sullivan used in his 1983 Bunting.

I have not typeset or made machine audio for these piano arrangements because I don’t believe they are useful to us. I don’t think they give us harp style and idiom; if we use them to make realisations of the tunes we are just incorporating Edward Bunting’s classical piano style and idiom into our music.

In fact I would go the other way, and be suspicious of some of Bunting’s overwriting on the original MS4.29 transcription pages, because I think he is using his piano arrangement skills to make those emendations.

I think that the Higgins live transcription in MS4.29 looks to me like a harp instrumental version of the tune. But it was composed by Carolan as a song. Perhaps Cody’s version might be a sung form of the melody?

Donal O’Sullivan (Carolan 1958 vol 2 p.33) notices a few different versions of Carolan’s lyric. He notes that there is a version on page 2 of Thady Connellan’s Duanaire Fonna Seanma published in 1829. I haven’t seen this, but he says that the title there is “No. II, An Teasbog O Hairt. Rev Doctor Hart, County Sligo, By Carolan”, and he says there are 17 lines beginning “Bheara me anois, an chuairt so gan bhréig” (Donal O’Sullivan, ‘Thaddeus Connelan and his books of Irish poetry’, Éigse vol III, 1941-2 p.293). O’Sullivan prints the first verse from this source in his 1958 Carolan, and the entire text with English translation in his 1983 Bunting.

Hardiman in 1831 printed a version of our song, with a facing-page English translation, in volume 1 of his Irish Minstrelsy, p. 29-32. Hardiman has 2 verses beginning “Rachfaidh me-si suas an uair so gan bhréig”.

Tomás Ó Máille printed a version of the song in his Amhráin Chearbhalláin (1916) page 121. His first line is “Racha mise suas an uair seo gan bréig”.

I think it could be very useful to collate the corrupt instrumental harp set of Doctor Hart, against Cody’s shorter simpler version, and the different sets of words, to try and see if there are structural features that we could use to understand, firstly how the lyrics might fit onto Cody’s tune, and second whether we could perhaps understand the harp transcription as a kind of melismatic free extension of this simpler shorter structure. But I don’t know, maybe this one is too far gone to get anything convincing up and running without larding it with our own modern preconceptions or Bunting’s piano arrangement.

We can check my Old Irish harp Transcriptions Project Tune List Spreadsheet, to see what tags this tune has. We can see that in his later piano arrangements, Bunting tags this tune 4 times, each one telling us that Hugh Higgins was the source. Higgins died in 1796 and so I assume that all the tunes collected from him were transcribed in 1792.

The first tag is in QUB SC MS33.3, which is part of the two volume unpublished “Ancient and Modern” piano collection compiled in 1798. I assume the attribution tag comes from that time. The other tags all come from 40 years later, after all of the informants were long dead, and so I don’t know how reliable they are. But since they corroborate (or are derived from) the early attribution that shouldn’t be a problem.

One thought on “Doctor Hart”