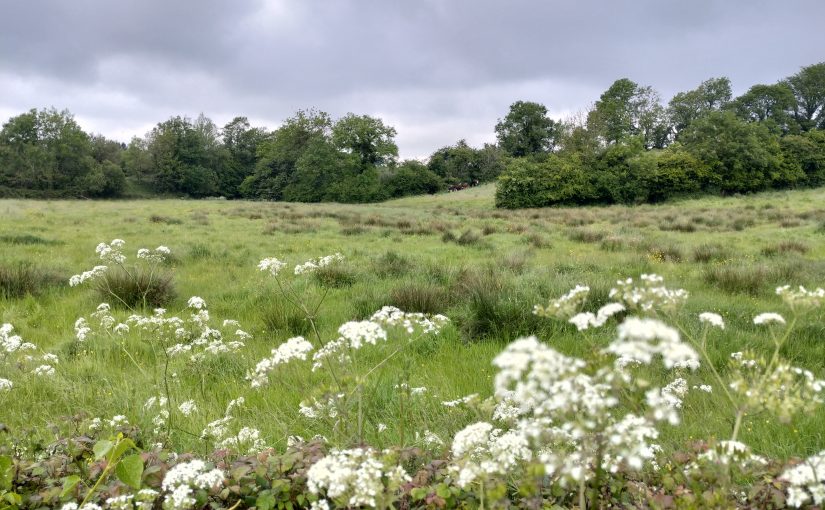 In one of Edward Bunting’s little collecting pamphlets from the 1790s, there is a two-page opening containing a live transcription notation and expanded neater version, or the tune of John Jones. You can see the two pages online. They are Queen’s University Belfast, Special Collections, MS4.29 page 164/162/171/f80v and page 165/163/172/f81r

You can see that the live transcription is quite complicated and spreads over two facing pages, one opening. You can see how this opening fits into the composite bound manuscript on my MS4.29 index pdf. There is very little text on this opening; Bunting has written a title for our tune at the top of page 164 “John Jones” and then at the head of page 165 is a comment or note “near Castlebar fine singing [the] / right way”. Perhaps this note was written from the dictation of a tradition-bearer or informant, making suggestions for future collecting trips?

My typeset version and machine audio tries to follow the initial live transcription dots. Therefore it ignores the neat notation on the right hand page 165. This neat notation seems to be Bunting’s re-writing of what is in the dots.

You can see that the tune starts on the left page 164. It looks to me like Bunting has made the live transcription dots, and has then over-written those dots with note stems, beams and barlines. He has numbered the bars 1 to 16. He seems confident and happy with this section even though there are a few deleted notes and dubious rhythmic markings.

After the double barline at the end of bar 16, marking the halfway point of the tune, it all starts to go a bit pear shaped. I think Bunting often struggled with the second half of these long tunes. On the third stave of page 164, he starts out with 4 bars worth of dots that were obviously clear enough for him to expand later with stems and beams and barlines, but from the 5th bar of the second half we see just the initial bare transcription dots. The 4th stave of p.164 is just a long line of dots (corresponding to the neat bars approx. 8 to 12 of the second half). Then the 5th stave of p.164 seems to repeat this same material.

Then on the first half of the first stave at the top of page 165, we see new dots, corresponding to bars 13 to 16 in the neat version.

Then on the first half of the second and third staves on p.165 we see three fragments which I think are a third attempt to capture that difficult passage (corresponding to bars 8 to 12 of the second half in the neat version)

By contrast, the second layer for the first half of the tune (bars 1-16) and also for bars 2-5 of the second half, has been over-written on top of the live transcription dots. This is actually more of a problem for us because the over-writing has obliterated the dots. We have to squint at the page to try and imagine which notes might be original parts of the live transcription dots, and which notes might be Bunting’s later over-writing. We see deleted dots, with a thick line through them (e.g. in bars 2, 5 and 6).

We also see a very interesting thing in bar 13, where a dot high on the stave for the note E has been abandoned (but not deleted), and a 2 note bass figure B-E has been inserted. We can instantly wonder whether the harper actually played B-E in the bass, or if they only played E in the bass and Bunting invented the B, or if they played the E in the treble and Bunting invented the bass register shift.

Can we even see a hint of a second E live transcription dot peeping out from under the heavy over-written note head?

I think it is important to recognise these heavier neater notes as being part of Bunting’s development of the tune. There is a complete process here, from the (unwritten) live performance of the tradition-bearer harpist, through the outsider Bunting’s attempt at making a live transcription, his attempts to make sense of it by over-writing, his de-traditionalisation of the tune as he worked it up into a classical piano arrangement, to the final version ready for publication. We need to be able to recognise which marks belong to which level of this process.

I think you can easily see that Bunting has adjusted the tune quite a lot from his initial live transcription from the harper informant. As well as adding his own classical piano accompaniment, he has adjusted the tune to make it fit better with the piano harmonies. I think we are getting quite a long way away from the traditional performance here.

You can always check my Carolan Tune Collation Spreadsheet to see what versions there are of any Carolan tune (not that the spreadsheet is complete, I kind of abandoned it when I started on this Transcriptions Project). Our tune is No. 63.

The piper James Cody wrote a very interesting version of our tune into his rough notebook, now Queen’s University Belfast Special Collections MS4.6. The tune is on page 109 (old 100), and the facing page 110 (old 101) has the song lyrics. Cody does not attribute either the words or the tune to Carolan.

O’Sullivan also gives references to other sets of words. Sometimes the words are anonymous, sometimes they are attributed to Carolan and sometimes to McParlan. The words address an un-named woman and are spoken in the character of John Jones. The story says that Carolan composed the song for Captain Jones, who then sung it to his sweetheart. Sometimes the words are titled for Madam Jones so perhaps the wooing was successful! Douglas Hyde says “Ba dheacair a rá an méid pósadh a rinne an Cearbhallánach. Bhíodh sé i gcónaí ag cuideachttan leis na daoine óga do bhí i ngrá lena chéile” / “It would be hard to tell the number of marriages that Carolan made up. He used constantly to help young people who were in love with one another” (The Songs of Connacht / Amhráin Chúige Chonnacht 1985 p.36-7)

We have a different (or perhaps connected) story as well. Bunting has written a note about this tune, on MS4.29 page 79/75/084/f37r. This is a tune list headed “From Hugh Higgins”. The first item on the list says “John Jones Carolan [???]”. I can’t properly make out that last word; it might say “ill” but it might say something else. There are three other titles in the list and then it gives some traditionary information perhaps from the dictation of Higgins or another tradition-bearer: “Jones a Taylor made C / a suit of cloths and did not / Charge him any thing for it”.

We can tell from the note that Hugh Higgins played this tune, and the implication is that Bunting collected a version of the tune from Higgins. Yet Bunting in his piano development of the transcription, says it is from Denis O’Hampsey.

So was the live transcription dots written down from the playing of Higgins, or O’Hampsey? I don’t know.