On Wednesday, I hosted Ann Heymann’s visit to the Wighton Centre in Dundee. As well as performing a concert, she gave a workshop and I was pleased to see a good turnout from my weekly Saturday harp class regulars. 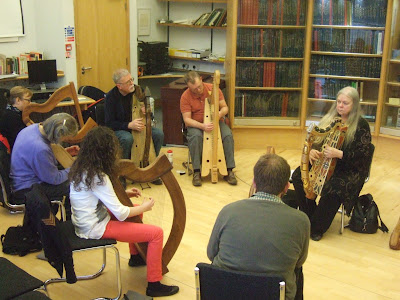 Next weekend is her Saturday evening concert and Sunday workshop in Edinburgh: 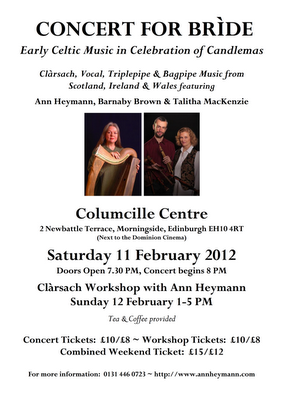 I have recently been working on this pibroch or ceòl mór, which I first heard on Allan MacDonald’s CD, Dastirum. I had been on the look out for it anyway, since I have a gradual project to learn up versions of the various tunes associated with the Morar harper, piper and fiddler, Raghnall MacAilein Òig (1662 – 1741), whose name is unfortunately Anglicised as Ronald MacDonald.

I have been playing A Ghlas Mheur in concerts for a wee while now and am very pleased with how it is turning out. I have only just started learning An Tarbh Breac Dearg, and it is changing every time I play it – already I am thinking of different sonorities for the ‘away’ sections, and wondering how best to return to the ground between variations.

I am very struck by how both A Ghlas Mheur and An Tarbh Breac Dearg are so obsessively focussed on three note binary sequences. They remind me very much of the medieval Welsh harp music notated in the Robert ap Huw manuscript, and I wonder how much that is because of Raghnall being trained in the old clarsach traditions as well as being a piper and fiddler. Certainly these compositions seem of a different taste to other bagpipe pibroch I am familiar with.

The other thing I am not yet clear about is the actual subject matter. Early piping sources call this tune An t-Arm Breac Dearg, the red tartan army. The song refers to the bull, and the association with Raghnall gives us bull stories to link it with, but I do wonder if they are both later accretion onto an originally martial composition.

This is Lamento di Tristano as played at last Tuesday’s concert of heroic music. A fitting elegy for a fine harper, lover and hero.

I’m also experimenting with a new audio recording setup – hope you like the sound.

I surveyed the scene in a stupor. But finally I recovered enough to ask: ‘What is this sound, so strong and so sweet, which fills my ears?’
‘That’, he replied, ‘is the music of the spheres’

Cicero, The Dream of Scipio

Reviewing the whole idea of “early music” I was struck by how different areas of it focus on different things. I’m especially aware of a focus on instruments which comes in the historical harp field. I suppose that harps in general are quite rare instruments in modern Western culture, so a replica or reconstruction of a historical harp is all the more curious as a physical object. Many times at events people come up to me and want to know how old it is, and what wood it is made from. I doubt that jazz pianists get asked that very often!

The second area of focus is then repertory – given a carefully reconstructed and exhaustively described and explained instrument, what do we play? The search for historical repertory is an interesting activity to observe. There is a constant tension between the familiar and the exotic. People know certain old tunes and there is a temptation to overplay them. On the other hand, part of the attraction of reviving old music is the novelty, the thrill of discovering something new and exotic. Some old repertories sound very alien, and I often have people come up after an event to comment on how the music sounds oriental.

But I think that the most important aspect of our work ought to be expression and interpretation. The whole point of music is surely a communication between people, and so it is by definition happening right now, totally in the present. If it speaks of the past, all well and good; many conversations today reference history as a symbol or authority, with great rhetorical and symbolic weight. But the past is only that, a reference; the communication is entirely now between living breathing people, and so the expression and the communication have to be the most important thing.

Nowadays music is considered somewhat neutral, as a pure art or as entertainment, but in the past it was much more embedded in wider life, with functional and symbolic significance.

One big reason for that was that before the rise of recordings, all musical acts were necessarily done in real time by a live human performer. This meant that the music was done for something, for someone, and not (as often now) just happening as background noise.

Because of this intentionality of performance, all aspects of music had purpose and meaning. I was particularly thinking of the significance of musical instruments recently. I think that certain instruments still do retain these symbolisms and resonances, but in a less clearly articulated way.

My fiddle has a most enigmatic label inside! 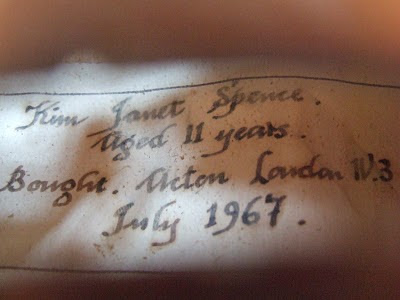 I wonder who she was, and where the violin came from.

One question I’m often asked is whether I play with an orchestra, or, if the questioner is more aware of music scenes and genres, if I play with a group or band. I find it interesting that there seems a lot of subtle expectation or even social pressure on musicians to join forces, the modern symphony orchestra with choir I suppose being the ultimate manifestation of this. In classical music, performers are rarely truly solo – pianists and organists being the only ones to regularly perform unaccompanied.

In Scottish and Irish music I see it a lot as well, though to a lesser extent – groups are rarely more than 4 or 5 strong, much smaller than a symphony orchestra. But it’s fairly uncommon to find recordings or professional performances of unaccompanied singers or fiddle players. I think the more high profile and professional the gig, the more expectation there is of having other people performing at the same time.