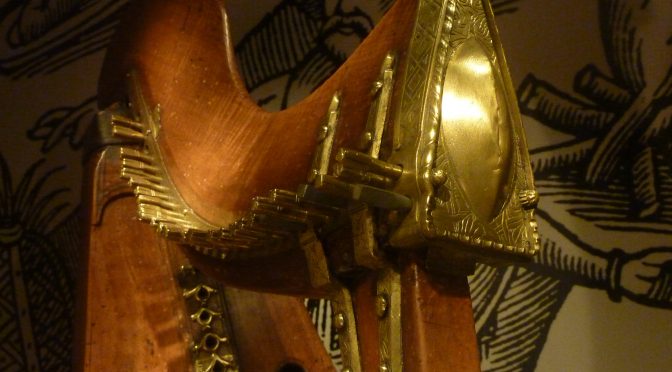 As part of my work to re-connect with the most recent threads of the old Gaelic harp traditions, I have been working a lot on the late 18th and early 19th century Irish tradition-bearers. In some ways that work is easy; we have portraits, we have their harps in the museums, and we have live transcriptions of their playing, both treble and bass.

John Robertson of Lude died in about 1730; he was the last of the family to play the harp. We have both of his harps, preserved in the National Museum in Edinburgh. Both harps were already very old when he played them, and I suspect that they were valued as much as antique curiosities, as working instruments. I don’t think we can accept them as typical of 18th century Gaelic harps in use in Scotland.

We can go through the list of harpers mentioned by Keith Sanger and Alison Kinnaird in their book Tree of Strings (p.153-169), and see if we can tell anything about their actual instruments.

Raghnall Mac Ailean Óig (c.1662-1720?) is first mentioned. He is known as a harper as well as a fiddler and piper in 19th century tradition, but we can say nothing about his lineage or instrument.

Alexander Grant of Shewglie (c.1675-1746) is also said to have played pipes, fiddle and harp, and the English paraphrase of his song comparing the three instruments was publised by Simon Fraser, but again nothing can be said about his harping lineage or his instrument.

Irish harpers working in 18th century Scotland would include Denis O’Hampsey, who of course had the Downhill harp.

O’Hampsey visited “one laird, who had a harp, and that was a very small one, played formerly by the Laird’s father”. I suspect this might have been John Robertson of Lude, and if not, it may have been a similar scenario, with an antique (possibly medieval) harp similar to the Queen Mary harp preserved in the family. “very small” in this context would be relative to the Downhill harp, which itself is small by 18th century Irish standards.

Echlin Ó Catháin (1729 – ?) was another Irish harper working in Scotland in the mid 18th century. I would assume he played on a large high-headed harp in the 18th century Irish style, but I am not finding any references to what his harp was like. Tunes attributed to him are in the MacLean-Clephane manuscript, but their basses don’t seem to be original Gaelic harp style.

Murdoch MacDonald (? – 1739) was harper to the Laird of Coll; he is often said to have been a student of Ruaidhri Dall Morison, but Coll tradition disputes this and says he studied the harp in Ireland, at “one of the most noted colleges of harping”, near Belfast. Ruaidhri Dall also learned the harp in Ireland, and so there’s no reason to suspect that either of their instruments were not the usual 18th century Irish high-headed harps.

William McMurchy (c.1700-c.1770s?) was another person who is said to have played pipes, fiddle and harp, as well as being a poet. In his surviving manuscript notebooks is a page giving “the dimensions of a harp”, describing a large high-headed instrument with 14 strings below na comhluighe – i.e. going right down to bass GG, 2½ octaves below middle c.

I think there was a gap from the late 18th century to the mid 19th century, and then there was a final swansong of native Gaelic harpers in Scotland. Patrick Byrne was performing in Edinburgh and Fife in 1845, and other harpers from the Belfast school came across to Scotland in the early to mid 19th century as well. They were playing on the big wire-strung Egan Irish harps. Patrick Byrne’s harp at least is known, in a private collection in the USA. I’m not really dealing with later stuff, such as the Mullaghmast harp and Charles Bell’s harps in 19th century collections, and the various revival attempts. They are after the end of the indigenous inherited tradition – another story for another time.

So in summary, we can see four extant harps that we know were used in Scotland in the old tradition. We have Patrick Byrne’s Egan and Denis O’Hampsey’s Downhill, both large Irish high-headed instruments. We also have John Robertson’s Queen Mary and Lamont harps, both small medieval instruments kept in playing order as valuable heirlooms.

We have a written description of one more instrument, the large high-headed harp measured by McMurchy.

We have two Scottish harpers who learned their craft in Ireland (Morison, MacDonald) and we have another Irish harper working in Scotland (Ó Catháin). And we have three harpers who are more connected to the Scottish Gaelic piping tradition (Mac Ailein Óig, Grant of Sheugly, McMurchy), without obvious Irish connections.

My feeling is that John Robertson might have been the odd one out, playing on small medieval harps; the others may have all had large high-headed instruments, the same as we see in the 18th century Irish tradition.