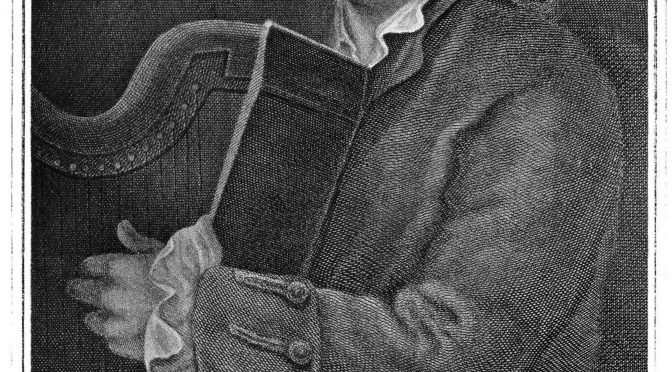 Having just re-wound a harp that had its strings wound on to the front of the tuning pins, I wondered if there was any evidence as to which way the old harpers wound their pins.

nowadays its normal to wind the tuning pin so that the string comes off the back of the pin (the side nearest the soundboard and nearest the player). This means that turning the tuning key clockwise, raises the pitch of the pin, and turning it widdershins lowers the pitch.

However some harps have it done the other way round, with the string coming off the front of the tuning pin, nearest the forepillar.

Karen Loomis’s Lamont copy, made by Guy Flockhart, is done this way, and so are a couple of harps I have seen made by Paul Dooley.

Winding the strings off the front of the pin allows for more clearance if the pin placing is close in the bass, but it also throws the angle between strings and soundboard wider especially in the treble. That’s the main reason I re-wound this harp today, to even up the fan of the strings. Another reason to re-do it off the back of the pins is that to me this seems more natural, to wind the key clockwise to tighten the string.

But is there any more concrete clue from the old tradition?

The 19th century “Society” harps have bridge pins, and are clearly set up to be wound at the back of the pin, like pedal harps and lever harps normally are. The portrait of Patrick Murney seems to show this way.

The strings on the extant harps seem to be 19th or 20th century cosmetic restringing, and the Sirr harp, the Downhill harp, the Hollybrook harp, and the Kildare harp, all have their strings wound off the back of the pins.

The Otway had its strings wound off the front; these strings were very thick and there were not many of them, so it seems unlikely they were from its playing use. The Rose Mooney harp has most of its strings done off the fronts of the pins, includng the fragments of wire attached to some of the highest pins, which may indicate that this harp was wound to the front in actual use. Though the smashed state of the harp may imply that its stringing and setup was adjusted to compensate for the distortion. The V&A harp has its strings wound off the front, and the bass pins look like they are too close together to allow for winding off the back. So this harp may also indicate original use wound off the front. On the other hand it is an unusual late form so may not be typical.

Portraits of harpers don’t usually show enough detail, and usually show the “display” right side of the harp, so the left ends of the pins are not visible. The oil painting of Carolan doesn’t show the strings. The engraving of Denis O’Hampsey is ambiguous and I can’t tell which way his strings are wound.

In conclusion, the evidence is not clear.

It is possible that both orientations were used on the same harp; I have set up harps before with most of the strings wound off the back, and just one or two in the bass wound off the front to give extra clearance.

Edited Feb 2019 – the strings are not visible on the original oil painting of Carolan’s portrait!

3 thoughts on “winding strings on to tuning pins”