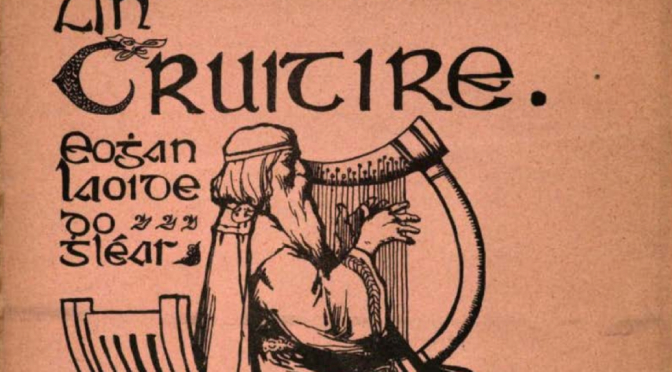 It is a common trope in the world of historical Gaelic harp studies that the tradition was “broken” in the 19th century, that the revivers of the harp of Ireland and Scotland had no contact with the last of the old tradition-bearers. But yesterday, Sylvia asked me if I was sure that this was true, and so I started to wonder.

Owen Lloyd was the subject of an article by Mary Louise O’Donnell, ‘Owen Lloyd and the De-Anglicization of the Irish Harp’, published in Éire-Ireland, Volume 48, Issue 3&4, Fall/Winter 2013, pp. 155-175. The article concentrates on a post-modernish cultural generalisations, and the technical and historical information is missing, confused or misleading, especially with regard to the different types of harp, blurring together the early Irish wire-strung instruments with the revival gut-strung instruments indiscriminately under the general catch-all label “Irish harp”. But O’Donnell gets a lot of credit and appreciation for bringing Owen Lloyd to our attention and giving us information and leads to follow.

Owen Lloyd was born in Kilkee, Co. Clare, around 1852. At that time, there were still harpers trained in the old tradition; the Belfast Harp Society school had closed in 1839, and the Drogheda Harp Society in 1844. I don’t know of a proper listing of the students of these schools, but harpers from Belfast include Patrick Byrne (died 1863), Patrick Murney (still alive in 1882), Samuel Patrick (died 1888). Their musical pedigree went back through the society’s masters, Valentine Rennie and Edward MacBride, who had been taught by Arthur Ó Néill. 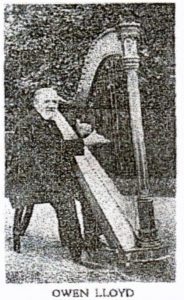 Owen Lloyd learned to play the harp “at an early age”, and studied pedal harp with the Welsh harpist Thomas Aptommas. A newspaper photograph of Lloyd with a pedal harp shows him holding it in a left orientation, left hand in the treble and right hand in the bass, as was still common amongst Welsh harpists even on pedal harp in the 19th century. After studying with Aptommas, Lloyd was a pupil of Adolf Sjödén (1843 – 1893), a Swedish pedal harpist who was in Dublin in 1879.

Sjödén organised an “Irish harp revival festival” at the Rotunda in Dublin, on 6th, 8th & 10th  May 1879. Newspaper reports at the time describe how Irish tunes would be played on “a choir of pedal harps”, but the concerts also featured “a trio of ancient Irish harps strung with wire” as well as “one of the last surviving of the celebrated Blind Irish Harpers” playing an “Ancient Irish Harp, strung with wire”.  Another review names “A blind Irish harper, Mr. Smith … on a so-called ancient Irish harp”.

Owen Lloyd is not named in the contemporary reports or advertisements, but a newspaper article (undated, probably c.1930) describes Lloyd being presented at the 8th May concert as one of Sjödén‘s students, as his first public appearance.

As well as his pedal harp, Lloyd also had an Irish harp. It was one of the big wire-strung harps that were made in the mid 19th century for the Belfast Harp Society. I don’t know when he got it (O’Donnell’s reference suggests he had it by 1899).

Lloyd seems to have left a significant legacy; he published a book of arrangements, and had a lot of students.

So we have a person who shared a stage with some of the old tradition bearers, who learned to play the harp left-orientation, who was heavily involved in Irish language and cultural activism, and who acquired an old wire-strung Irish harp.

Was he inspired by seeing the old tradition-bearers in 1879? Did he understand the connections between his Welsh training and their genuine Irish harp tradition? Did he acquire the Hewson harp so that he could go and study with them? Did he inherit their tradition from them? Is he the “missing link” that connected the old tradition-bearers to the living tradition of Irish harping into the 21st century, like Nansi Richards (Telynores Maldwyn) was in Wales?

Or was he totally forward-looking? Did he simply ignore the old tradition bearers? Did he get the Hewson just for novelty value, and restring it in gut?

Either is far too big a claim to make now; but it’s worth pursuing this line of enquiry. We need to understand more about how he used his wire-strung Irish harp, and we need to inspect his musical style as shown in his book of arrangements, and we need to look carefully at his students and their students to see what his musical descendents were and are doing.

But there is clearly a lot of work to be done here, with the specific aim of untangling the different threads – the old Irish harp tradition, the Welsh tradition, the Anglo-Continental tradition, and the re-invention out of whole cloth.

8 thoughts on “Continuity of tradition”