In the talk I explained how there are three key parts of the jigsaw here; we have the harp in the National Museum of Ireland, commonly called “Carolan’s harp”, but which Ann Heymann has convincingly argued belonged to Rose Mooney; we have a letter from James MacDonnell listing the number of strings above and below na comhluige on Rose Mooney’s harp, effectively giving us her tuning schedule; and we have the tunes tagged as collected from Rose Mooney in Edward Bunting’s manuscripts and printed books.

In the talk, I said, “given that we have two entire pages of Rose Mooney’s repertory as title lists… I’m thinking that Rose Mooney’s harp is a good candidate for making a student version of, because here’s her repertory that we can play on it”.

The HHSI subsequently received grant funding to commission simplified student copies of Rose Mooney’s harp, and I have borrowed one of them to pick up on this work outlined in my talk.

In the talk I discussed Planxty Connor, but I have started work instead on Charles Coote. Bunting’s early piano arrangement in his unpublished Ancient and Modern (ms33(3)&(2)) is harmonised largely in parallel octaves; it is in C major and the bass mostly sits in the same position as the bass of Féileacán, one of the teaching tunes I have been studying for my new edition of my source book, Progressive Lessons. So it seems a simple task to play Charles Coote straight from the manuscript piano book, using the fixed bass hand position adopted for Féileacán. I checked the 1840 printed piano arrangement of Charles Coote, which is also tagged as coming from Rose Mooney, and that arrangement is completely pianistic, obviously Bunting’s own invention and not based on harp style.

I also have looked at Leticia Burke. This tune is harder to understand; there are a number of source notations in Bunting’s collections. His field draft in ms29 is in a context that looks like it comes from Denis O’Hampsey, and his jottings indicate a lot of bass movement in the tune. This is confirmed by his Ancient & Modern piano arrangement, where the tune is tagged as from O’Hampsey, and the tune basically alternates between treble and bass phrases.

However, the printed version of 1809 is tagged “Mooney harp” in Bunting’s annotated copy of the book. Is this Bunting forgetting who he took a tune from? Or did O’Hampsey and Mooney have basically the same setting of this tune? There are tiny differences beteen the two settings; are these differences between O’Hampsey’s and Mooney’s playing, or is this Bunting experimenting at the piano?

O’Hampsey played on the Downhill harp, quite a small instrument with a restricted bass range, and using long fingernails; Mooney used a significantly bigger harp, and played with the tips of her fingers, so we might expect a difference of approach between them.

I have not worked consistently through all the other tunes on my list. Some of them are clearly in developed harmonic piano arrangements. but a few of the others have the distinctively un-pianistic bas with parallel octaves and spare textures, and the alternating of motifs and phrases between treble and bass.

The majority of Rose Mooney’s repertory that we have is compositions of Carolan. I think it’s kind of ironic that the likely spurious connection between Carolan and the harp in the museum, can be continued and reflected by using the copy to get to grips with original 18th century harp arrangements of Carolan’s tunes. 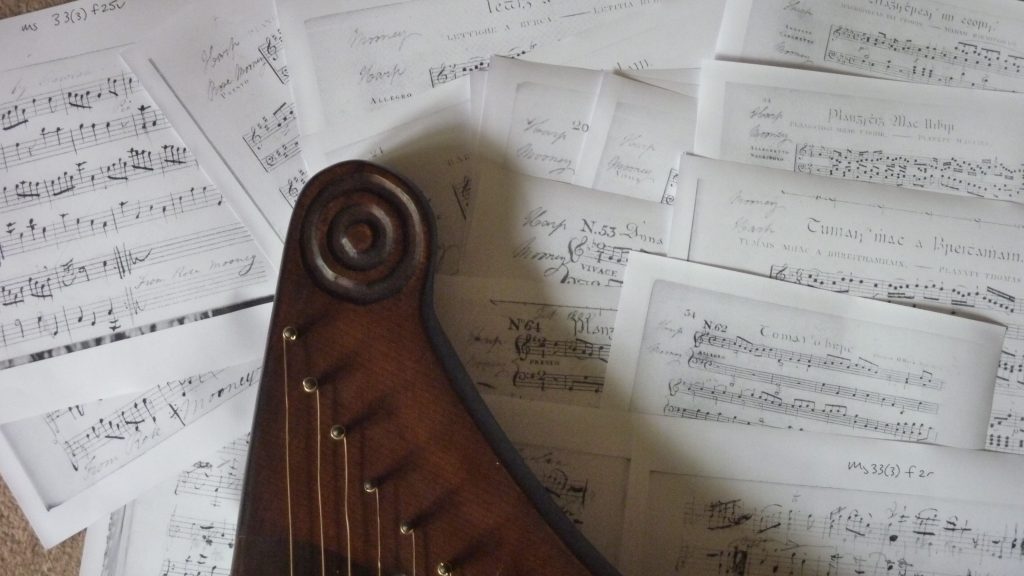 One thought on “Rose Mooney & Carolan”