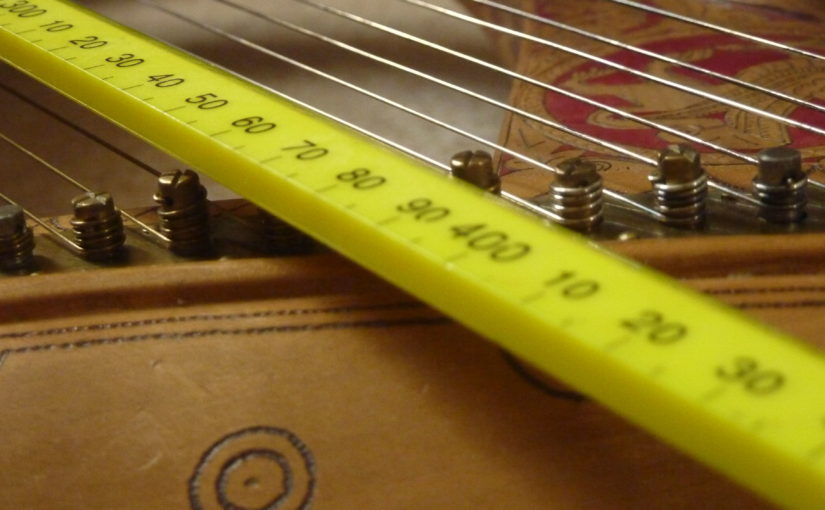 When my replica of the Queen Mary harp was new, Keith Sanger suggested to me that I should measure it repeatedly over time, to see if and how much it changed shape and size over the years.

The idea is to get some idea of how reliable the measurements we take of the old harps in the museums are, and how much the old harps might have changed shape from when they were new to how we see them now.

I went to Belfast to meet Davy Patton and get the harp on 1st April 2007, and so yesterday was marked in my diary to measure the harp again.

I did not measure it as often as I had originally intended and there were gaps in my spreadsheet. I also gave up on the idea of taking measurements of all the wooden components, because it was obvious to me that the error and ambiguity of hand-measurements was greater than the change over time. But I thought that measuring string lengths was worthwhile and so I have kept doing this. I decided that the numbers were interesting enough to make a chart to show you.

My chart shows the most shrinkage happening in the first day or so after stringing and bringing the harp to tension (the 3rd April 2007 measurements were with the harp unstrung as delivered). I am sorry now that I did not re-measure between 7th May 2007 and 9th August 2015, because there was clearly some movement and shrinkage over that time period, and it would be nice to know when. I took the harp to Natalie Surina in March 2015 to have the inside carved out, and it was pulled apart at that time.

You can see from the chart that the harp has continued to shrink since August 2015. The high treble strings have not changed, but the belly of the soundboard has pulled up (not surprising after being thinned a lot). But the lowest bass strings have also kept shrinking more than the margin of error. I estimate all measurements here +/-1mm.

The next date in my spreadsheet is 1st April 2030. Check back then for an update!

One thought on “The incredible shrinking harp”