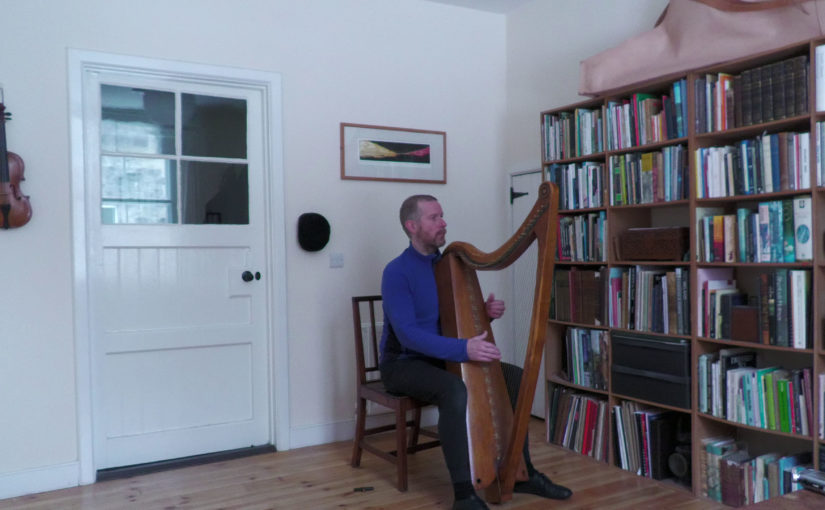 On Queen’s University Belfast, Special Collections, MS4.29 page 191 there are two tunes written in a very similar style. At the top of the page is “Planxty Dermot” and at the bottom is “Cathal Mac Koo”.

We can see from my spreadsheet that both of these items have later attributions to Byrne in Bunting’s 1798 “Ancient and Modern” piano manuscript (Ms4.33 parts 3 and 2), though Planxty Dermot also has much later Quin attribution.

Cathal Mhac Aodh is tune no.69 in Bunting’s 1840 book. The notation in MS4.29 page 191 is set in F major, and requires 2 flats. To me this suggests it is not a harp version but most likely vocal (F major with 2 flats does not fit into the harp tuning schemes we are told about). Bunting tells us that Byrne was “not distinguished as a performer, [but] he possessed an extraordinary fund of songs”. I am not going to do a video demonstration of Cathal Mhac Aodh.

However, Planxty Dermot seems to be in a harp-friendly key and has certain technical features that make it fit well enough on the harp, and so I have tried to make a demonstration video for you.

There are no bass notes or ornaments marked in the transcription of Planxty Dermot. It is possible that this is also a vocal transcription and not a harp transcription. Bunting’s transcription sets the tune in D neutral, with the notes D, E, G, A, C as the main notes of the mode. We see the typical neutral-mode feature of the “double tonic” shift into the relative C major mode for some sections of the tune.

Bunting’s 1798 piano arrangement is clearly derived from the MS4.29 transcription. Bunting has transposed the tune up one note to E neutral; Bunting puts one sharp in the key signature of the piano arrangement, to indicate E classical minor, but he then has to mark every C with an accidental sharp sign. I think Bunting had no concept of neutral mode tunes, but in this case he seems to have managed with the tune OK.

Bunting developed a slightly more lush piano arrangement in the 1830s, which sets the tune in the same key as the 1798 version, with the same accidentals for all the Cs, but which repeats the first part of the tune:

The annotation at the bottom says “From Paddy Quin in 1802”. But note the ink offsetting of the year “1800” in mirror-writing to the left of that tag. Is this evidence of all these tags being added later and quickly, turning the pages and adding tags without waiting for the ink to dry? How does this inform our understanding of these late tags, done 30 to 40 years after the collecting trips?

We can check my Carolan Tune Collation spreadsheet to see that Planxty Dermot (DOSC 86) appears in Joyce, Pigot and Hudson in the 19th century, perhaps all from the same soure. This seems a little different from Bunting’s version and may give clues to phrasing and rhythm.

Donal O’Sullivan suggests that John MacDermott was the second son of Carolan’s patrons at Alderford, Henry and Mary MacDermott-Roe; but he doesn’t give any evidence to support this except for the co-incidence of name. It is certainly possible but hardly proven.

The most notable thing about this tune is that it shares its distinctive introductory motifs with Saely Kelly (DOSC 75). Donal O’Sullivan also points out similarities with Fáilte go Kingsland or John Drudy (DOSC 43), though that could just as well be because they are both neutral-mode tunes; I don’t see a great resemblance in their structure or flow.