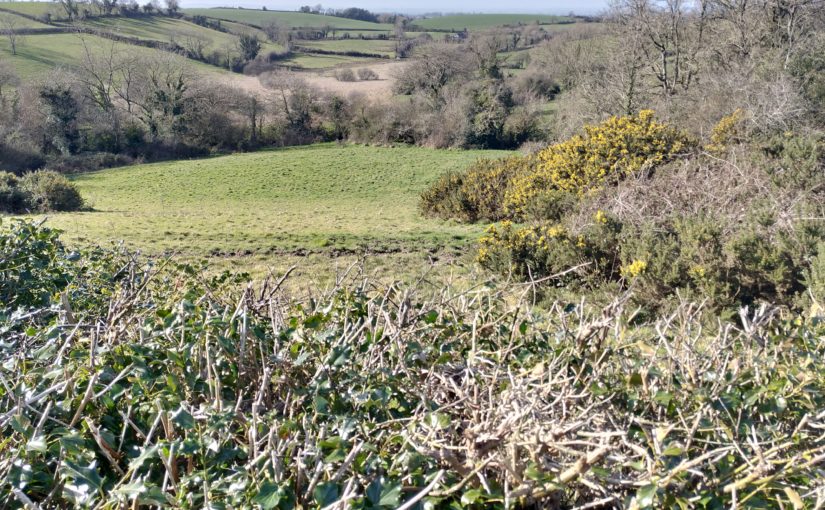 The third and last tune on this interesting two-page spread (Queen’s University Belfast, Special Collections, MS4.29 p.225) appears to be a very straightforward and clear notation. Let’s take a look:

Bunting has written this tune on the second stave of the right hand page, p.225, and he written above the notation “vurneen dilish”.

The notation looks to me like it started out as the live “dots” transcription, written by Bunting while the tradition-bearer informant was performing; Bunting has then added note stems, beams, and barlines. It all looks very clear except in bar 7 where there are two deleted dots – Bunting usually deletes a transcription dot by drawing a line through it at an angle. Sometimes these cam make it look like a note, but here it seems clear enough There is an A dot which is beneath the second note of the bar, and then there is a D dot in the middle of the D-C pair of quavers. I have not shown these on my PDF typeset version or in the machine audio. My assumption would be that these are transcription errors that Bunting corrected very early on, while he was adding the rhythm marks.

Bunting does not seem to have developed this tune into a piano arrangement. It seems to me that our tune is a close variant of the first section of two other fairly well-known tunes, Caitlín Ní Uallacháin, and the Lady of the Desert. However I am not going to go into these comparisons here. We could have a week long seminar on the relationships between all of these similar tunes. I am concerned here to try and understand this particular transcription notation.

We can normalise this as mhuirnin Dilis (dearly beloved). We can start by questioning, did Bunting write “vurneen dilish” above our tune as a title for our tune, or did he write it there to reference another different tune? I have found lots of examples of this, where the “title” does not match the tune it is written above. You can see lots of these on my MS29 index and transcript PDF.

We can look for other titles of the form “mhuirnín dílis”. There are other “mhuirnín” or “muirnín” titles that don’t include the word dílis, and I think we can ignore these.

There is an English language song, to a completely different tune, titled ‘S a mhuirnín dílis, Eibhlín óg (you are my true love, young Eileen). The more common form of this title is the English phonetic equivalent, “Savourneen Deelish, Eileen Oge”, which forms the song’s refrain. The song appears to have been composed in London for the musical drama The surrender of Calais by Colman in 1791 (Donal O’Sullivan, Bunting part vi, 1939, p. 53-60). The song instantly became a “hit” and quickly became well-known all over the place. Its tune seems to have been an old traditional song air, completely different from ours. If Donal O’Sullivan’s analysis is correct, then the song was composed only one year before Bunting’s first collecting tour! How quickly would such a song come to Belfast? Probably within weeks or months. How quickly would it go out to country singers and harpers? I don’t actually know. On the other hand, this could have been a newly composed song but using both a pre-existing traditional tune and also using its traditional Irish refrain. In which case this song air and title ‘S a mhuirnín dílis, Eibhlín óg, could be much older. But as I say, there seems to be no connection at all between that tune and our tune.

We can look for other examples of our title. On the sideways MS4.29 page 84 tune list there is the cartouche or curly brackets around two of the titles:

Might this cartouche refer to two of the three tunes we have been studying from pages 224 and 225 – mhuirnín Dílis, and chraoibhín aoibhin alainn óg? The mismatch between “‘S a mhuirnín dílis, Eibhlín óg” of the list, and “Mhuirnín dílis” of the tune header, bothers me.

We also seem to find these two titles together on a tune list on MS4.29 page 145, though I am struggling to read Bunting’s handwriting here. I think he says something like

But I am truly struggling to decipher these letters! I think that the horizontal lines signify the end of a title, rather than being hyphens in the middle of a title? So I think we have three titles here, chraoibhín aoibhin, Vurneen stogh he her, and Mhuirnín dílis. I have no idea what the middle one might be. Suggestions in the comments below please!

On MS4.29 page 87 is the single word “warneen”, above a fragment of notation. I don’t understand what is going on here. This is the first page of a pamphlet and so it likely bears no connection to the previous page which would be the final page of a different pamphlet, until the book was assembled and bound up together around 1802-5.

On ms4.29 p.100 we have a slightly different phrase in a list of titles, “Vurneen Dellish vaal ma chree”, presumably for Mhuirnín dílis geal mo chroí (dearly beloved, light of my heart).

When Arthur O’Neill was dictating his Memoirs, soon after 1800, he describes playing the restored Brian Boru harp in the streets of Limerick as a young man, perhaps in the 1760s:

The first tune that I happened to Strike on, was the Tune of “Elleen Oge”, now generally called “Savourneen Dheelish. and Erin Go Brah,”

This raises as many questions as it answers: Does O’Neill in 1800 know a derivative version of the 1791 English song, with the chorus “‘S a mhuirnín dílis, Eibhlín óg” replaced by the line “‘S a mhuirnín dílis ‘s Éirinn go Bráth”? And, did he know the same tune by a much older title of “Eibhlín óg”? What tune was it that he actually played? Did it have political significance in 1760? I have no idea of any of these things.

“Cathleen ne Oullahan” is written as the third item on the tune list on QUB SC MS4.29 page 79. This list is headed “From Hugh Higgins”. There is a notation of Caitlín Ní Uallacháin on QUB SC MS4.29 page 84, but I don’t think this is a harp transcription and it may have been copied from a book or manuscript. Bunting’s later piano arrangements based on this p.84 notation are tagged “Byrne (except one which is tagged “Higgins”). I have not yet written a commentary on this page.

I do wonder if Bunting recognised our tune as a variant of the first half of Caitlín Ní Uallacháin, and so used that title when he was sketching out the Higgins tune list. And that could imply that Higgins may have been the source of our p.225 transcription. But I am really grasping at straws here.

I think we have to conclude that we don’t know who this tune was notated from; and we can’t at this stage say anything useful about it.