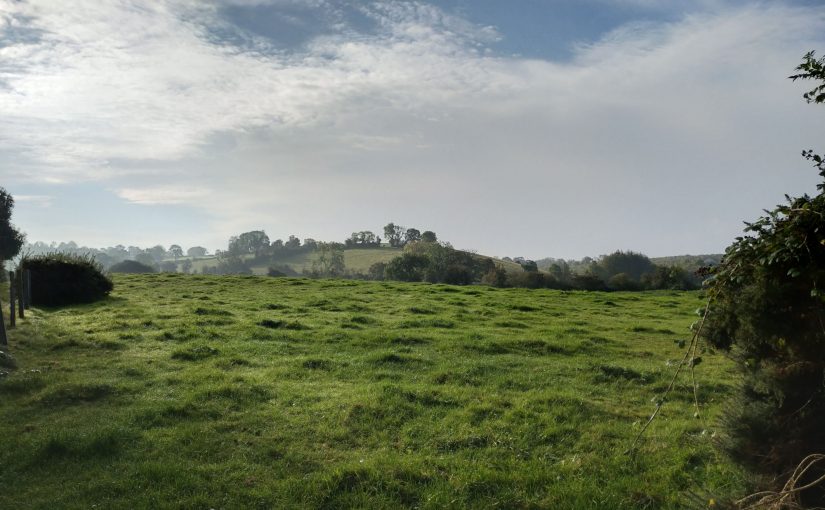 Caitlín Ní Uallacháin was one of the personifications of Ireland in poetry and song. There is a whole nest of variant and different tunes titled Caitlín Ní Uallacháin (Anglicised as Cathleen or Kitty Nowlan), but we don’t have enough time or space to go into them all here. All we can do is look at four versions of the tune in Bunting’s manuscripts.

The notation on Queen’s University Belfast, Special Collections, MS4.29 p.84/80/89/f39v has elements that make it look like a live transcription. It looks like it is formed of dots, which have later been expanded with the addition of stems, beams and barlines. The very final note is expanded into a minim, but you can still see the underlying dot. We can see that at other points, Bunting has used rests to pad the time value of a bar instead of minims. These underlying dots are characteristic of his live transcriptions.

The first problem is that Bunting has heavily over-written the transcription dots, partly obliterating them in the first six bars. This makes it hard to see what he wrote as the live transcription, before he decided he knew better and re-wrote that first section.

The other problem is understanding the key or mode of the tune. At face value it seems to be in E major, which is not a traditional harp key or tuning. We can check the Transcriptions Project Tune List Spreadsheet to see that other tunes nearby are all written at pitch, and so it seems unlikely that this one alone would be one up. And if it were, that would put it in D major with C sharp, which is not a normal harp key (though it may be technically possible). It seems to me that this transcription may actually be notated as a bass clef notation, which would set it low on the range. This would make it in G major which would be a very common harp key. (unless of course it is a vocal transcription in E major).

Bunting’s title here is “very old / Cathlleen ne Oullaghan” above the notation, and “Cath[e]line Nolan” below

My machine audio is a speculative realisation of the manuscript notation; it first plays through Bunting’s heavy editorial over-writing of the first six bars, and then after a pause it plays through my attempted reading of the underlying original notation, before the first 6 bars were over-written.

Perhaps I am jumping too quickly to claim this as a harp transcription. It could possibly be transcribed from a vocal performance. But perhaps we can say more about it if we look at a few different versions of the tune which Bunting also notated.

A vocal version of the tune

There is a version of the tune which Bunting transcribed live from a traditional informant in or near Westport, county Mayo, when he was out with Patrick Lynch collecting songs in the summer of 1802. This version is very nice but has no connection to harp performance.

This Westport 1802 transcription is titled “Catilin ni Ullachan” and is given the key signature “D.M.” for D major, two sharps, and the time signature 3/4.

I am not finding any set of words, or even a title reference, in Lynch’s manuscript notebooks of the song lyrics he collected on this Westport trip. It is possible that Bunting took this from an instrumental performance perhaps on pipes or fiddle, though most of the 1802 Westport transcriptions seem to have been from singers. There is an English song lyric titled “Kathy Nowlan” in QUB SC MS4.36 which starts “fair Iris I love, and hourly I die” but I think this is a newly composed English language song to be set to a piano arrangement of Kitty Nowlan.

Another transcription version of the tune

Another notation which is a lot more inexplicable but which looks at first sight like it might be a live transcription, is in the back of one of Bunting’s 1798 piano arrangement manuscripts. Our tune is in the form of dots which have been scratchily expanded with note stems and beams and barlines, as we are used to seeing in Bunting’s live transcriptions. However there is also a key signature of two sharps, as well as having a treble clef. Bunting does not usually put a clef or a key signature onto his live transcription dots. The style of the treble clef also doesn’t look like Bunting’s handwriting, and so I wonder if someone else may have made this notation. Certainly the title and text at the top and bottom of this page is not in Bunting’s handwriting.

The first system on this page shows the end of the previous tune, a piano arrangement of “Carolan’s Receipt”. The title of our tune is written above these piano bars of Carolan’s Receipt; it reads “The most amiable Miss Nolan / Ainfhir ní huallachain le T,T,” and the text at the bottom of the page seems to read something like “nil fhios agumh cia aca don dís is fearr / Righ Sacsan na an na[???] ni huallacháin”, which seems to mean something like, I don’t know which of the two is better, the King of England or Caitlín Ní Uallacháin, and is obviously some kind of allusion to her political or nationalistic symbolism. These may well be two lines of the song. Colette Moloney, in her Introduction and Catalogue (2000) p.460 suggests Ainfhir might be for Ainnir, a maiden. I don’t know what the “le T,T,” of the title might refer to, or even if I am reading it right.

Edward Bunting made what looks to me like a neat copy of a version of this tune, into one of his little collecting pamphlets presumably in the 1790s. His title is “Cathleen ne Oullaghan”. It looks to me like it is not a live transcription, since it is just that bit neater and more carefully spaced out on the page. It is in a curious section of the manuscript (p.201-3) which seems to contain a sequence of harp tunes that don’t look like live transcriptions. Straight after is a sequence of pages copied from the rare Neal publication of 1724. I am guessing that Bunting copied these tunes from books, perhaps at the house of someone he stayed with on one of his collecting trips.

At the bottom of the page, underneath the similarly neat copy of “Plangsty Charles Coote Esqr.”, Bunting has written “Mr L. Hunt <dead> of Boyle in the County Roscomn. / has the best Collection of Irish tunes <Carolans> in Ireland. Wal[k]”. Were these tunes copied out of books from Mr. L. Hunt’s library? Or from Walker’s library? Did Walker (or whoever) recommend to Bunting that he try to get access to Mr Hunt’s library?

I think this copy version of Caitlín Ní Uallacháin may have influenced Bunting’s heavy editorial overwriting on the MS4.29 p.84 transcription page.

Edward Bunting made a number of piano arrangements of this tune. All but one of the ones with attribution tags, is given as being from Charles Byrne. There is an early piano arrangement tagged from Charles Byrne, in the 1798 unpublished Ancient and Modern piano book, MS4.33.3 p.31. There is one tagged “Byrne 1806” in the big piano album MS4.13 p.59 (I think) and there are two very similar ones in the other big piano album MS4.27; the one on p.50 is tagged “Byrne 1802”, and the one on p.91 is tagged “from Hugh Higgins in 1792”. Finally, Bunting published the tune in his Ancient Music of Ireland, 1840, no.97 on p. 71; the index p.ix tags it as from Byrne in 1806. I don’t believe these dates; these annotations were done in the 1830s, 40 or more years after Bunting was out collecting.

Incidentally there is a general question here, about the attribution tags in the 1798 Ancient and Modern piano manuscripts (QUB SC MS4.33.3 & MS4.33.2). We usually assume that the attribution tags were written into the manuscript in 1798, yet the later “byrne” tags imply that Bunting had not got the tune from Byrne at this early date. So either the “Byrne 1802” and “Byrne 1806” tags are wrong, and it was got from him in the 1790s, or the “Byrne” tag in MS4.33.3 was written in some years later than the book was compiled. Perhaps all of these tags in the 1798 manuscript were added retrospectively, perhaps in the 1830 and 1840s when we know that attribution tags were collected and added to other books?

So how do we try to work out what each notation represents, and how do we assign or attibute them to different sources or informants?

I think at this stage I can’t see very clearly what is going on here. These are only my guesses. I may have missed some vital clue.

The most enigmatic notation is the one in MS4.33.2 p.90. This looks to me like it was done by someone else, not Bunting. I presume it was done after 1798, using a spare space at the back of Bunting’s 1798 unpublished “Ancient and Modern” manuscript. Is it possible that this version was done by someone else, as a live transcription from the singer and harper Charles Byrne in 1806? I don’t know. I need to think more about this whole section of transcriptions at the back of MS4.33.2. You can see my listing of these transcriptions on my Old Irish Harp Transcriptions Project Tune List Spreadsheet.

The MS4.33.1 p.30 notation was obviously transcribed by Edward Bunting, live from a singer or traditional musician in Westport in 1802

I think that the MS4.29 page 202 notation looks like a neat copy out of a book or manuscript. My guess is that this was done in the 1790s, most likely 1792 or 1796 when we know Bunting was out with these collecting pamphlets, taking down tunes from traditional informants and also making copies out of books and manuscripts along the way.

I think that Bunting was inspired by his p.202 neat copy out of a book, to go back and edit the p.84 transcription, and so I think the heavy overwriting on that page is copied from the p.202 neat copy.

So who was the informant for the p.84 transcription? I am going to stick my neck out and suggest it may have been Hugh Higgins. There is a tune list on QUB SC MS4.29 p79, titled “From Hugh Higgins”:

Underneath the transcription of Kitty Nowlan on page 84 is another tune list, written sideways.

There is a significant overlap between the beginning of this tune list on p.84, and the tune list headed “from Hugh Higgins” on p.79.

We can see from my tune list spreadsheet that other tunes in this section of the manuscript from p.78-90 also have Higgins attributions.

There is also an attribution for the tune of Caitlín Ní Uallacháin, “from Hugh Higgins in 1792” in one of the big 1830s piano arrangement books, QUB SC MS4.27 p.91

So it seems to me very possible that our p.84 transcription of Kitty Nowlan may have been taken from the harper Hugh Higgins in 1792. I already suggested this when writing up Thugamar fein on p.86.

There’s a great commentary on the song of Caitlín Ní Uallacháin, in Petrie’s Ancient Music of Ireland. I’m working from the 2002 David Cooper / Cork University Press edition, on pages 222-226. Petrie gives two different (but related) melodies for the song.

One thought on “Caitlín Ní Uallacháin”