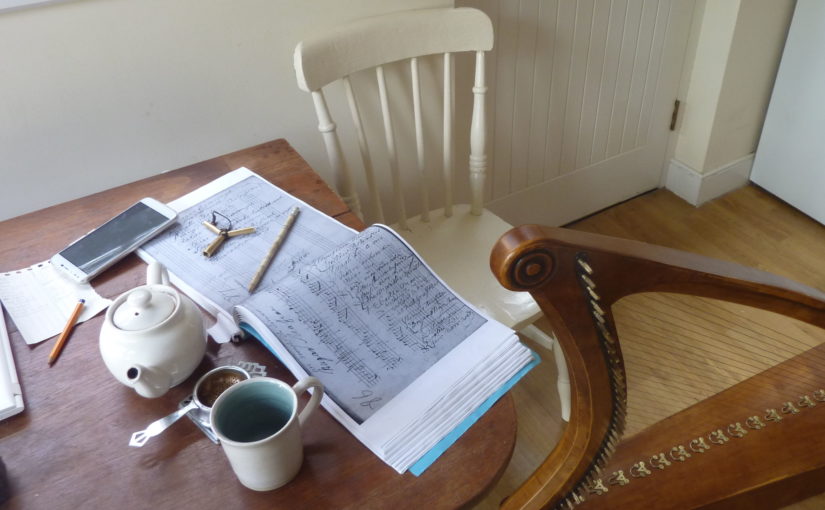 I made a video demonstration of Thugamar féin an samhradh linn, based on Edward Bunting’s live transcription most likely from the playing of the harper Hugh Higgins, in the summer of 1792:

The transcription is written in one of Edward Bunting’s little pocket collecting pamphlets, now bound up as part of Queen’s University Belfast, Special Collections, MS4.29. You can see an online facsimile of it on page 86/82/091/f40v.

Bunting has titled the notation phonetically, “hugar mafean” and has also written the English translation “we brought the summer with us”. The rest of the page is a list of tunes, which you can see on my index and transcript of ms29. The tune lists run over four pages, from p.84 to p.87. The two notations on these pages, our tune on p.86 and Caitlín Ní Uallacháin on p.84, seem to have been written into spaces beside the tune lists. Caitlín Ní Uallacháin may have been transcribed from Hugh Higgins singing in summer 1792 (see my Old Irish harp Transcriptions Project Tune List) and so this has interesting implications for the dating and context of the tune lists. The tunes on p.84 have some overlap with the list on p.79 which is headed “from Hugh Higgins”.

You can see from my playing of Thugamar féin that this transcription is pretty straightforward to understand. The second half is a kind of “variation” which points to this being an instrumental harp performance transcription and not a song version. There is one ambiguous note, in bar 3 of the variation (second line of notation in the manuscript), where Bunting seems to have written A-E-E and then corrected the first E to F (sharp).

The tune is in D major pentatonic mode, with F sharp tuned on the harp. There is a hint of neutral in the mode of Thugamar féin, and the tune could be considered to be in A neutral. But the notes of A neutral are A, B, D, E, G whereas the notes of D major are D, E, F♯, A, B and so part of deciding which mode this version is in, is deciding whether the F♯ or the G is the intrusive “out of mode” note.

Bunting made a second live transcription of the tune of Thugamar féin, upside-down on MS4.29 p.200, perhaps from Black in 1796. This seems to me to be a more vocal version (we know Black sang), and is in E neutral / A major, and seems to be pushed more towards the neutral mode.

There are other versions of this song and other related songs, connected to May customs. Pádraigín Ní Uallacháin has written about these on her website at Oriel Arts and in her book A Hidden Ulster (p.121-30).