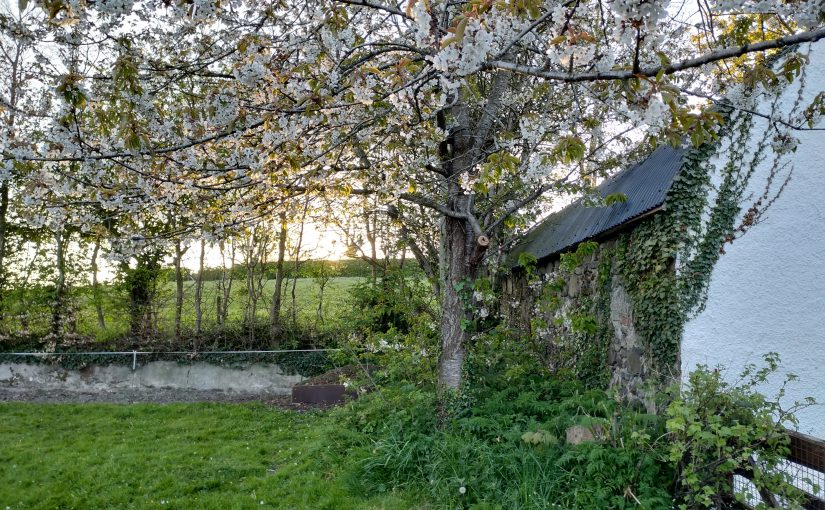 Some time in the 1790s, Edward Bunting made two attempts to transcribe the tune of “Tá an Samhradh ag teacht” into his “Damn your Body” field transcription pamphlet.

On p.186 Bunting has written our title twice: “Summer is co[nui]g” and “Summer is Comming”. I can’t really make out the first one, it looks like “conuig” to me and I can’t see how it could say “coming”, but it is very messily written.

He has also written a title of a different tune, again very hard to make out. It might say “the white c[???] / vanig a vaunna” but I am very unsure. And then he has written the title and music notation of “Catty O Brians”. I think this is a later neat copy copied from a book. I discuss this a little on my post about Betty O Brian.

On p.188, Bunting has made a live transcription notation of our tune, but he hasn’t written a title. Underneath are titles of different tunes, “Plangsty Dermot”, “Speac Seaosh”, “My dear stay with me till morning”, “Brink of the shandy [brans]” all of which tunes appear later in this 16-page “Damn your Body” pamphlet. There’s also some of his strange doodling which seems to say “Mo o niees / Mastleal / Samson”. These words (or variants) appear often in the transcription books and I don’t know what they mean.

You can see that the transcription dots are written in F major, which is not a common harp key. And this tune seems to require the 4th, which would be B flat, which we know is not part of the traditional Irish harp tuning schemes. So I have transposed the whole notation one note up to make it into G major, with F sharp, which is a very common harp key. This is part of my current experiment to see if all of the transcriptions in the “Damn your Body” pamphlet are notated one note down from a normal harp key or mode.

You can see that this transcription has started out as a line of live transcription dots; some of the dots have been deleted by having a strong diagonal line drawn through them. Others have been expanded with stems, and some even have beams and barlines to give a hint of the rhythm of the tune.

Bunting obviously wasn’t happy to continue over-writing on these dots, and so he turned the page and started again on page 190. Here he gives us a title in phonetic Irish and English: “Taun sorore taght” and “Summer is coming”. Under the staff he writes (with a different pen) “Not very Ancient so says Hempson”, and then at the bottom we have a load of titles which refer to tunes, some at least of which appear later in this same pamphlet: “eloo wera”, “Charles McKue”, “Granamanoge”, “Go[u]la [shr]u[h]an anl[?]”, “Stauhin varrega / the market stake”, “Gardener”, “Song La du[c]e” and “Moon”. I don’t understand all of this.

Again we can clearly see this manuscript notation is in F major, so my typeset version and machine audio transposes it up one note to be in G major.

Bunting has written the double repeat sign at the end :||: but there is nothing after it, which I think reinforces my idea that he is using this sign sometimes just as a kind of emphatic double bar line, with no intent to actually repeat the material before or after it.

This tune seems clearly enough transcribed, though some of his rhythmic notation seems a bit flakey (some of the bars don’t add up to the correct number of beats). We can see him changing his mind about the rhythym, for example in bar 6, the second note has a quaver angled tail, as if he originally was thinking of crotchet-quaver-crotchet, and then changed his mind and drew a beam across all three notes to make them all crotchets. I think this kind of evidence for him changing his mind as he goes is important for understanding his working method, and for how little real direct solid evidence we have of what his traditional informants were actually playing or singing.

Bunting’s piano developments of this tune

Bunting’s original aim with the Irish Music was to “transcribe and arrange” the tunes and to publish them, and I think he was already thinking of how to de-traditionalise the tunes and adapt them for commercial piano arrangements even when he was out collecting from tradition-bearers.

Bunting published a piano arrangement of this tune as no. 7 in his 1797 collection, under the title “Ta an samhradh teacht / The Summer is coming”. The arrangement there is clearly derived from our transcription notations; it has the same overall structure of 6 lines, but the melody has been adjusted to make it more pianistic and to make it fit better with Bunting’s new piano accompaniment. You can listen to Bunting’s piano arrangement played by Fiachra Ó Corragáin.

This tune has become very well known in the wider tradition because Thomas Moore used the tune for his song “Rich and rare were the gems she wore“. You can hear a lovely performance as track 5 on the CD Thomas Moore’s Irish Melodies conducted by Timothy Roberts. Moore published this song in the first volume of his Irish Melodies in 1807.

There are English verses to this tune in Bunting’s papers, but I have not seen these. They seem to be to do with trying to set an English song to the tune. I don’t know the date of these papers and I have not seen the originals. In QUB SC MS4.36 part 46 there is list of tune titles with hints or examples as to the kind of English lyric needed for them, and a lyric “Rich and rare were the gowns she wore” is suggested for “the song called The Summer is Coming” (Moloney, Introduction and catalogue p.440). In QUB SC MS4.28 is a text titled “The Summer is Coming” and beginning “The summer comes with verdure gay” and a note “a versification by Miss Balfour of two verses sent by Mr Gilland” (Moloney, Introduction and catalogue p.337).

Bunting made a very grandiose (and apparently wrong) claim for this tune; in the introduction page iv of his 1797 book, he writes

The ancient air Ta an samradh teacht, or the Summer is coming, (No. 7) is used upon the opening of summer in different parts of the kingdom. Strange as it may appear, this proves to be the same song in essence, both as to poetry and music, which Dr. Burney has published and written so voluminous a critique on, as the first piece of Music ever set in score in Great Britain. The extreme improbability of it being borrowed by the ancient Irish, from a country that had no national music of its own (the Welsh excepted) is sufficiently evident…

Probably in the early 1840s, Bunting went back through his old printed collections and added handwritten information. (see Karen Loomis’s paper on these annotated volumes at the British Library). Beside our tune, no.7 in the 1798 collection, Bunting has written quite a lot. First of all he writes “Harp Hempson” and then in the left margin is a long text, referring to the English medieval song Sumer is icumen in:

The copy of this song / in the Harleian / MMS is precisely the / same as the Irish air / it was written / in the 14 century / and is the oldest song / extant. The Irish / set of it I got from Priest O’Donnell / of Belfast who was not aware of the / existence of the / former copy / which is mentioned / by Burney / Hawkins &c

I think this tells us nothing about the tune or its relationship to the medieval English song but is very interesting for showing Bunting’s political angle – everything was pushed to make it as “ancient” as possible as part of a conscious mission of Irish nation-building, and that tunes were understood in terms of their “national” characteristics. This is a whole field of study in itself.

We could see a similar urge to exaggerate the “ancientness” of these things in the tendency for more recent commentators to try and conflate our tune with other songs with similar seasonal themes, such as Thugamar féin an samradh linn or Tiocfaidh An Samhradh.

Underneath the printed notation in his annotated copy of the 1797 book, Bunting writes “Most ancient” and “perfect scale”, and finally at the bottom of the page he writes some song lyrics in quotation marks, and a little comment about them:

it finishes with the words
“the break of day”

It is not clear to me if these incomplete English language words were what Priest O’Donnell gave Bunting, whether by singing them to him, or by writing them in a letter, or if they are O’Donnell’s translation from an Irish lyric, or what.

We can try comparing them to other lyrics from summer-themed songs but I am not finding an exact match. I don’t even know if they really go with our tune, because to be honest I am not really believing anything that Bunting wrote about this tune.

The only attribution information that Bunting has given us is what I mentioned above, written into a copy of the printed book probably in the early 1840s, almost 50 years after he was out collecting with his little pamphlets. He writes “Harp Hempson” at the head of the tune, and he also says “…got from Priest O’Donnell of Belfast”.

I don’t believe that Denis O’Hampsey was the source for this particular transcription notation on MS4.29 pages 188 and 190. There are two reasons for this; one is that the tune seems to be transcribed one note down from a plausible harp key, and Bunting’s transcriptions from Denis O’Hampsey’s playing seem to be all notated at pitch. Secondly, the writing on page 190 “Not very Ancient so says Hempson” is done with a different pen, and looks to me like it was added in later, to give a bit of information that O’Hampsey told him about the tune, which he wrote into an old transcription notation.

We can also think about Bunting’s sequence of operations. Suppose he had made this transcription notation on page 190 in the summer of 1792, or perhaps in the summer of 1796. He took that pamphlet with him to Magilligan, and perhaps he sung through some of the tunes in it to Denis O’Hampsey, asking him if he knew them, or if he had a better version. O’Hampsey heard Bunting humming through this tune and said “that’s not very ancient”, and so Bunting jotted down the observation. But he still published the ancient claims in the 1797 printed book. Perhaps he had already written the introduction by the summer of ’96, and it was too late to change it? Or perhaps Bunting believed his own hype and decided to ignore the opinions of the old man.

Do the p.188 and 190 live transcriptions of the tune derive from Priest O’Donnell in Belfast?

Or is it more likely that Bunting made this live transcription on p.188-90 from the same informant as the rest of the “Damn your Body” pamphlet?