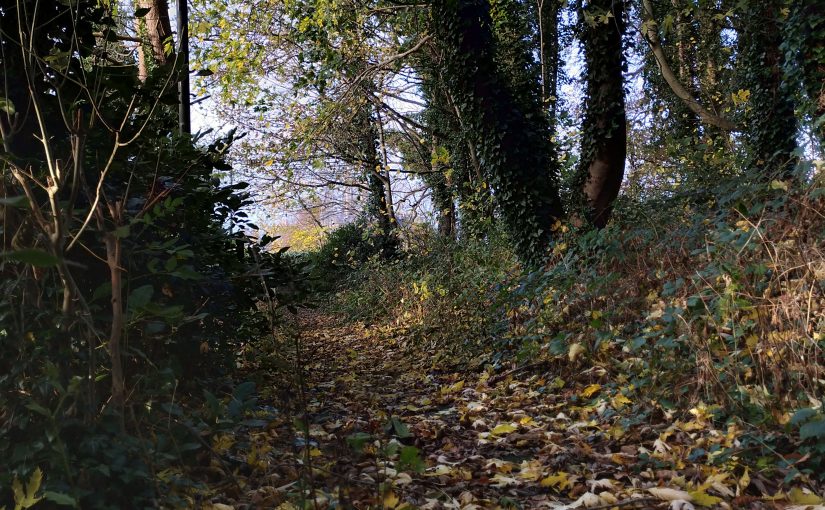 Edward Bunting made what looks like it might be a live transcription of a performance of the traditional Irish song air, Bruach na Carraige Báine, onto the fifth page of his “Damn your Body” transcription pamphlet, some time in the 1790s.

This notation clearly shows a neutral mode tune, as we can see by the run of notes in the last two bars: A-C-A-G-E-G-E-D-D. The notes of a D neutral pentatonic mode are D, E, G, A, C. There are a few weak B notes, but they are so weak that it is hard to say for certain whether B♭ or B♮ would be more appropriate. I think that B♮ fits better more generally into this tune and mode as the major 6th of the scale, and so my machine audio plays the tune like that.

The high F is strong, which makes the tune sound more like D minor.

Underneath this transcription of “Bruach na Carraige Báine” on page 189, Bunting writes other titles: “Lamentation / Oyn O Neils” and upside-down, “Mary would go with me”. But he also writes a title “Brugh ne Banna”, which may perhaps relate to a different transcription later in the same pamphlet.

A few pages further on in the same pamphlet, on page 198, there is another live transcription notation, much more incomplete. It is titled “Breagh na Baunne”. Donal O’Sullivan (Bunting 1983 p.43) says that this p.198 tune is a variant of the p.189 one we considered above, but I am not entirely sure what is going on here. Lets look at it right now:

This tune seems to be in A minor; we see the characteristic notes of A minor after the double bar line int he middle of the tune: [A] C D E G A. The B passing note in A minor would be B♮, not B♭, and so again this leads me to think this transcription is already at pitch in a plausible harp key.

The rhythm is so unclear that I can’t really say very much about this tune; I think it is different from the other transcription; it seems to be written in a different handwriting; I don’t recognise it from anywhere else. I will just leave it here for now and we’ll continue talking about the page 189 transcription of Bruach na Carraige Báine instead.

Back in Belfast, Bunting used his page 189 transcription as the basis for a new piano arrangement, in his unpublished 1798 Ancient and Modern collection. This manuscript piano collection is now with his papers in Queen’s University Belfast.

Bunting’s title here is “Bruach na carraice Báine – The brink of the white Rock”, and at the bottom of the page he has written “From Hugh Higgins Singing”.

We can see that this is a piano arrangement; Bunting has made a completely new piano accompaniment. But he has also tweaked the tune a little to make it sit better on the piano with his new chordal bass.

It is interesting to see the tune presented in the same place on the staff as in the transcription; Bunting’s key signature of one flat shows that he is thinking of the tune in the classical key of D minor. There is only one B in this version of the tune, in bar 11, and Bunting has cancelled out the key signature by inserting a B natural accidental sign. There are B flats in the harmony, and also a few C sharp accidentals. This is all part of pushing it into a D minor key on the piano.

Bunting published a piano arrangement of this tune as no.26 on p.22 of his 1840 book. His title there is “The brink of the white rocks”, and he gives an Irish title in the index page ii, “bruachna carraige baine / Bruach na carraige báine”. He gives an attribution on the index p.x, that it was “procured” from “a blind man at Westport, 1802”. This piano arrangement is bumped up a note to make it in E minor, with one sharp in the key signature. Bunting sharpens the Ds in ascending passages to make it even more classical-minor in sound. He also sharpens the only C in the tune, in bar 11.

Bruach na Carraige Báine is a well known song in the tradition, and it seems that there are multiple tunes, or versions of tunes, that the song is sung to. There are too many for me to deal with in this blog post, which is meant to be just about Edward Bunting’s live transcription notation on MS4.29 page 189. However, I will notice the version printed by Joyce, Old Irish Folk Music (1909) p. 334, no.667, which is fairly closely related to our tune and which removes my doubts that Bunting may have got the title completely wrong.

A different air for this song is known in the tradition today as “Bruach na Carraige Ban”; see for examples thesession.org, thesession.org, irishtune.info. This tune was published by O’Farrell (vol 4) under the title “Carolan’s Cup”, but I don’t think there is really any connection to Carolan. You can see it listed on my Carolan spreadsheet as DOSC185.

Donal O’Sullivan found some lyrics for this song in Patrick Lynch’s notebooks, which he collected in Mayo in 1802. Lynch doesn’t say who he got the words from, or what tune they were sung to. You can see Lynch’s neat copy on QUB SC MS4.10.101. Lynch’s words are titled “Bruach na caraice báine” and begin “Bfearr liom no Eire mhór…”

However there are many many other sets of words to this song, far too many to discuss here.

Bunting writes the title above the notation on page 189: “Brugh ne Carrig a Baunne / the banks <brink> of the white rock”. We can normalise Bunting’s phonetic attempt at the Irish title, as “Bruach na Carraige Báine”.

However we also need to consider O’Daly’s version of the title, which seems to come from family tradition at Carrickblacker near Portadown in County Armagh. O’Daly, The poets and poetry of Munster published a text, plus two versions of a tune, under the title “Bruach na Carraige Baine / Bruac na Carraige Báine / The Braes of Carrick Bann”. He claims that this refers to the townland of Breagh and the townland of Carrick on the north-east side of the upper river Bann just outside of Portadown. I don’t think that his suggestion that the title refers to Breagh townland can be right, but certainly we can take his suggestion seriously that the word Carraig in the title might refer to the placename of Carrickblacker, instead of being just the usual word for a rock. I’m not sure about the final word of the title, whether it means beside the river Bann or whether it is just “Bán”, white. O’Daly says that his translation of our song comes from Colonel Blacker, and immediately afterwards on pages 286-289 he prints the tune and text of the song An bhfaca tú mo Valentine? along with the story connecting it to Eliza Blacker of Carrickblacker, and so we might suppose he may have got both these two songs, and their associated lore, from Colonel Blacker.

What about the title of the other transcription? Bunting writes “Brugh ne Banna” on page 189, but “Breagh na Baunne” on page 198. Should we understand this to be a different title, perhaps the Banks of the river Bann? There is an English language song called the Banks of the Bann, which begins “When first to this country a stranger I came”. It is sung to a version of the hymn tune “Slane”. I am not seeing a real connection here.

I do think that our notation on page 189 is most likely a live transcription, since it lacks the characteristic features of Bunting’s neat copies (well formed round note heads, and minims). However it seems more spaced-out that the other notations we have been looking at in the “Damn your Body” pamphlet. Also that it seems less likely to be noted one note lower than originally played, makes me suspect that it might have been inserted at a different time, into a space in the pamphlet, and that it is likely not a part of the initial sequence of tunes noted as a group into this pamphlet. Of course it is also possible that the timing was the other way around – this tune could have been written in first, and then at a later time the main group of transcriptions could have been inserted around it. I don’t know at this stage.

If we check my Old Irish Harp Transcriptions Project Tune List Spreadsheet, we can see that this tune has conflicting attributions. We have two different tags from the late 1830s, both saying that it was collected from singers in the West of Ireland. In the big piano album QUB SC MS4.27, the tune is tagged as being collected at “Mrs Burke’s of Carrakeel” in county Mayo, in 1792, which is when Bunting was on his collecting trip with Richard Kirwan. But in the 1840 printed book, it is said to have been collected from a “blind man” in Westport, county Mayo, in 1802, which is when Bunting was out collecting song airs with Patrick Lynch. I don’t really believe either of these late attributions, because the song airs collected in 1802 are all in QUB SC MS4.33.1, and because the song airs collected with Kirwan in 1792 all seem to be in parts 2 and 4 or MS4.29. Perhaps Bunting got different versions of these tunes from those places, but I don’t think our transcription notation on page 189 is them.

The other attribution tag is in Bunting’s 1798 piano arrangement, where he has written “From Hugh Higgins Singing”. Now I don’t know if an attribution like this was written in at the time, in 1798, or much later. It looks to me like the same pen and style as the title so perhaps it is an early attribution.

We don’t know very much about Hugh Higgins singing. He is supposed to have been born c.1737 and died in 1796. Arthur O’Neill gives us some information in his Memoirs: the first draft is QUB SC MS4.46 p.16, and the neat revision is QUB SC MS4.14 p.20. The two texts are slightly different. He tells us that Higgins was from a respectable family in Tirawley, Co. Mayo; he was blinded early on and his parents sent him to learn to play the harp. He did extremely well at his studies and became an excellent harper: “one of the best I ever heard” says O’Neill in ms4.14. Higgins had “genteel manners”, and travelled in the style of a gentleman, with a servant boy; he “spared no expense” on his clothes, but because he was blind he had to trust his boy to choose the colours.

Now obviously a singer can pitch a song wherever they like, wherever is most comfortable for their voice; but would such a good harper as Higgins have used the harp to pitch themselves at a certain key, or even used the harp to play an introduction or even an accompaniment?

And what about the other transcription on p.198? I haven’t a clue at the moment.

There is so much we still don’t know about the traditional Irish harp performance style. But I don’t mean to be defeatist – every new fragment of information we collate (like in this blog post) tightens up the parameters and gives us just that bit more clarity on the nature of the tradition .