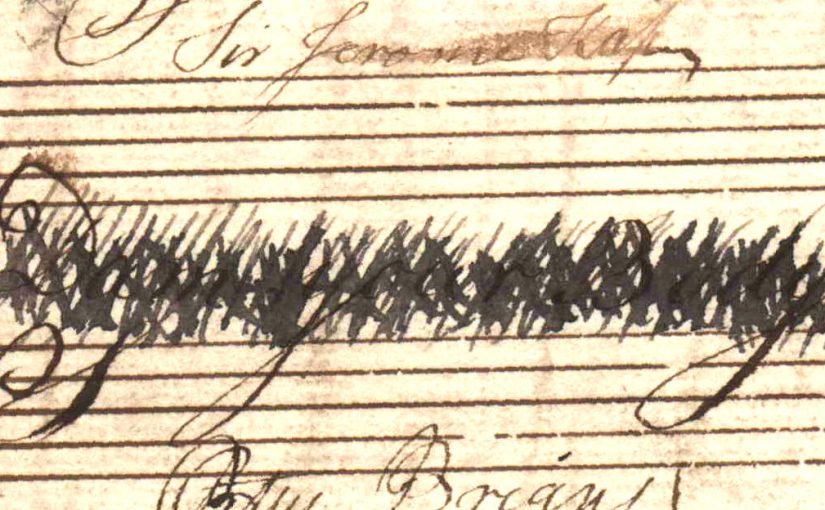 You can see my suggested gathering structure of the composite manuscript MS4.29 in my PDF (which also explains the reason why I give four different page numbers to refer to one page in this manuscript). I also mentioned this pamphlet 10 months ago. How far we have come since then!

The first page of this pamphlet

The writing on page 185 is mostly crossed out, and I can’t read most of it. The horizontal writing between the first and second blank music staves reads “Dam[n] your Body” and has been very heavily scribbled out. The sideways writing that has been scribbled out includes the name “Edward Bunting”, and the words “Oh Dear and “My Dear”. There are also some names, “Sir Jerome Ka[??]” and what looks like “Georg”.

Page 185 and also its reverse, p.186, also include the tune of Catty O’Brian. I wrote up a different version of this tune titled Betty O’Brien which is on p108, and on that post I made a machine audio of the p.185-6 notation. I think it looks like it may not be a live transcription, but a neat copy perhaps from a book or other manuscript. I think that the first and last pages of these little independent transcription pamphlets often contain tunes or fragments that were added much later, perhaps even after the pamphlets were bound up together between 1802 and 1805.

If you look at my Old Irish Harp Transcriptions Project Tune List PDF, you can see that the 16 pages of this pamphlet from page 185 to page 200 include a number of interesting tunes which I have not yet dealt with. At the moment I am counting about 23 or 24 different tunes in this pamphlet, almost all of them apparently live transcription notations. Many of them seem to be in non-harp-friendly keys, and 8 of them have attributions to “Byrne”.

So far I have already looked at An Gearran Buidhe & Bean an Leanna on p.187; Planxty Dermot & Cathal Mhac Aodh on p.191, and (in passing) Thugamar féin an samhradh linn on p.200. But I am starting to doubt some of my conclusions in those old write-ups. I am especially interested in the possibility that these tunes might all be notated “one down”, transposed one whole tone lower in the transcription notation, than they would be played in the traditional old Irish harp tunings.

I am planning to work through these manuscript pages one tune at a time, and write each one up here. Then after we have got to page 200, we should have a clearer idea of what is going on with this “Damn your Body” pamphlet.

15 thoughts on “Damn your Body”