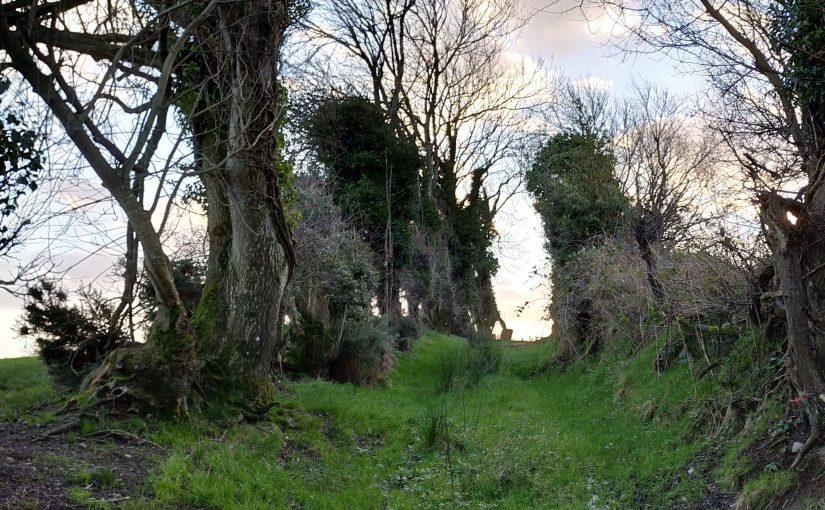 Some time in the 1790s, Edward Bunting made two different transcription notations of the tune of A cháiteach róin onto the same page in his “Damn your Body” collecting pamphlet. He later claims both were transcribed from the singer and harper Charles Byrne.

We can look at the two notations and see what we think about them.

The two notations are both on Queen’s University Belfast, Special Collections, MS4.29 page 196/194/203/f96v, written underneath the transcription of the tune of brad óg bréagach. Bunting has written three things at the head of the two notations, “Catugh Eroane”, “hairy wi[m]ow sheaf” and “words”.

The two machine audios play the two different versions. The first version starts at the beginning of the 3rd stave, and runs on to the start of the 4th stave. The second version starts after the double bar line on the 4th stave, and has its bars numbered. You can see it continues with bar 7 aligned underneath bar 1 partway along the 5th stave. The notation at the left hand end of the 5th stave seems to be a skeletal attempt to capture bars 7 through to 10; my second machine audio plays these plain notes after finishing the numbered bars.

Both of these notations seem a bit corrupt in different ways. The first seems to be in G major, and it finishes at the end of the line down on D, which is fair enough; then at the beginning of the 2nd line we have a repeat of the end phrase that consists of heavy over-written notes overlaying quite different transcription dots, and which brings the tune to finish on G. I don’t trust this phrase and I wonder if Bunting has over-written it to make the ending more classical.

The second version seems to be in C major, and it finishes down on G. That kind of matches the first version. Bunting seems to struggle with the final four bars, writing them twice, slightly differently each time.

Edward Bunting made two piano arrangements of these two versions in his unpublished two-volume Ancient and Modern piano collection which he compiled in 1798. The first is in volume 1 (QUB SC MS4.33.3) and the second is in volume 2 (QUB SC MS4.33.2). Both are titled very similarly, “A chatach roinnidh” and “A Catach roinnidh”, and both are attributed the same, “From Charles Byrne” and “From Charles Byrne County Leitrim”. It is my understanding that the “County Leitrim” tag in MS4.33.2 is telling us where Charles Byrne was from, not where the transcription was made.

Bunting also published a piano arrangement of the first one on p.54 of his 1809 General Collection. The arrangement is even more florid and classical, but the shape of the tune is basically the same as in MS4.33.3.

I am not going to make machine audio of these because Bunting’s piano arrangements tell us nothing about Charles Byrne’s traditional style. The only reason for looking at these pages is to confirm which fragments of transcription belong to which tune, and to check the attributions to an informant. Both of these may be misleading because Bunting was so flakey. Given the problems with the transcriptions, I don’t really trust Bunting here and I think he is doing too much tidying up.

Donal O’Sullivan has some useful notes on these two versions of the tune in his Bunting part 6 (1939) page 25-29. He found some lyrics of a song with the same title, which were collected in County Mayo in 1802 by Patrick Lynch. You can see Lynch’s neat presentation copy of the words in QUB SC MS4.7.174 (no. 117) and you can see Lynch’s English translation in QUB SC MS4.32.177 (no.130). As usual, Donal O’Sullivan tries to set Lynch’s 1802 words, to the tunes collected by Bunting in the 1790s. But Lynch never gives us any information about what tunes his song lyrics were sung to. Bunting does indicate that he is transcribing a sung melody, by writing “words” beside the first version, but he doesn’t give us any more information here about what the words might have been.

Donal O’Sullivan also lists a number of variants of our tune, including three versions from Stanford-Petrie (nos. 713, 1467, 1468).

There is a very interesting version of our tune with words and music. It is a neat copy, which is in a letter sent to Bunting by Alfred Blest from Sligo in 1807. Blest explains in the letter that he had originally transcribed or collected the tune and the words from the singing of “an old woman”. You can see the letter with the notation and words at QUB SC MS4.26.22). The tune seems a close variant of ours but the words seem quite different. Donal O’Sullivan (typically for him) ignored Blest’s words and tried to shoehorn Lynch’s words onto Blest’s tune. Blest’s title is “Cathough crone”:

Blest’s Irish lyrics are written in English phonetics. He explains in the letter to Bunting “as I know nothing of the Irish language my attempt to communicate the sound of the words in English is very poor … I have added what I recd as a literal translation of each line”. Blest has also made his own poetic paraphrase of the English translation.

Blest’s phoentics begin “Bleen sah thock sha poshemea / Us fidua lum law nah bleen” and the translation is “This time twelve months I was married / each day seems the length of a year”. At the end of verse two we have the reference to the cáiteach rón: “Neel cosague nah cobeahah whee / Augh liaube ghun shan caudah grawnagh / Nah whalle-een mah lawen na makeuh” (I am less certain of my reading of this bit of the phonetics!) “I am without a coat or a cape to it / with a fragment of an old ugly [cadau] / That covers neither Middle nor side”

Bunting has written “Catugh Eroane”, “hairy wimow sheaf” and “words”. We can understand “Catugh Eroane” as being his phonetic attempt at the title “cáiteach róin”. Cáiteach is a winnowing-sheet, and rón is horsehair, so this could well translate as a winnow-sheet made from hair. Presumably he was writing from the dictation of his tradition-bearer informant, and their words got garbled into “hairy wimow sheaf”. If Bunting can mis-hear their English like this, that has implications for how accurately he hears and writes the phonetical sound of their Irish titles (we discussed this a little for Bradóg).

Cáiteach seems to be the same word as used by Arthur O’Neil to describe the outfit of beaten rushes worn by harper Jeremy Duigenan for his famous contest in Dublin. There is some discussion of the cáiteach winnowing sheet made from straw, in Ann O’Dowd, Straw, hay & rushes in Irish folk tradition (Irish Academic Press 2015, reprinted 2022), p.257, but she doesn’t mention hair.