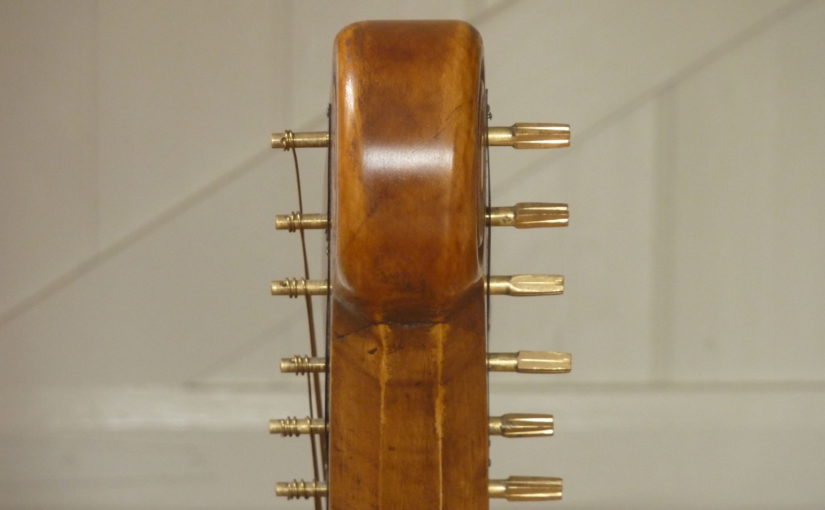 I made a video demonstration of the tune of the banks of the Shannon, based on Edward Bunting’s live transcription of the playing of an old Irish harper, perhaps Daniel Black in 1796.

The transcription is Queen’s University Belfast, Special Collections, MS4.29 p.104//109/f. You can check my MS4.29 text transcript PDF to see how this notation sits in the manuscript. The tune is titled “Brough ne Shannon / with words”. I take the word “with” to imply that this is not a transcription of a purely vocal performance, but of an instrumental (harp) performance; but that the informant also either sang the words to Bunting or told him that there were words to it. The fact that this transcription is tagged “with words” may have implications for other transcriptions of song airs not so tagged – was this one unusual for being transcribed from a harp-and-song performance, or unusual for being a harp-song setting as opposed to a purely instrumental air?

There is another word written in the top left corner of the page, partly obscured by the later pencil page number. I can’t make this word out; it might or might not be significant for our understanding of this tune.

The notation seems clear enough; it looks to me like it started as the dots only, and then has been elaborated with stems, beams, barlines, bar numbers, and repeat marks. In a couple of places we can see Bunting the classical piano arranger starting to edit the notation; in bar 2 the rhythm is being changed, and in bar 3 of the second half a lightly written A is over-written with a heavier G.

There is something funny going on between bars 4 and 5, with an extra beat for the two-note pickup; there is also an extra beat in bar 5 of the second half. This could be a notation error, or it could be an attempt to capture a performance style where an extra beat is added at the end of the line.

I am trying to play you what has been written there, with a minimum of interpretation.

It does, however, raise the question of how much harp idiom and style we can really get from Bunting’s transcriptions, and how much his classical piano filters have “flattened” the tune even as he was listening to the harper’s live performance and dotting along.

Attribution of this transcription

Bunting did not include this tune in his Spring 1796 proof sheets, but he did include it in his Autumn 1797 published book. Checking his collecting dates, we can see that the notation could have been made in Summer 1792, or Summer 1796. The neat confident nature of the notation makes me lean a little towards ’96.

We can check my Old Irish harp transcription project tune list spreadsheet, to see that Bunting tags the tune “Byrne” in a manuscript annotation in his copy of the 1797 print. These annotations were most likely made in the early 1840s, 40 or 50 years after his collecting trips, and so I don’t know how much weight we can put on them. It is possible that this transcription is from the singing or playing of Charles Byrne; or it is possible that Bunting remembered Byrne singing or playing the tune on another occasion; or it is possible this tag is a guess and is incorrect.

In QUB SC MS4.29 p.178 is a tune list which attributes tunes to “Daniel Black”. One of these tune titles is “Brough ne Shannon”. Bunting tells us (1840 intro p.78) that he met Black at Glendaragh House near Crumlin, the seat of harper Daniel Black’s patron, Mr. Heyland, in the summer of 1796, and that he took down tunes from Black then. Do we then understand this transcription to have been made on that visit? The next two tunes in MS4.29 are also on the Black tune list, and one of them is tagged “Black” “1796” in later piano arrangements.

Other versions and other tunes

There are other tunes with this title, but I don’t know if they are connected. Some are more modern compositions, such as this one composed by Paddy O’Brien the elder, of Tipperary; others appear in old collections such as this one from Fitzmaurice’s New Collection of Irish Tunes (Edinburgh c.1805/09). It is possible some of these other tunes titled “banks of the Shannon” may be connected to the various song words.

Donal O’Sullivan, in his Bunting Part I (1926) p.114-16 prints two sets of words collected by Patrick Lynch in Mayo in the summer of 1802. O’Sullivan underlays one set under the 1790s harp transcription melody, and says the other set is “in a different meter and will not go to our air”. But really I don’t see any necessary connection between this tune and either of these two lyrics, except they all begin “Ar bhruach na Sionainne…” and they are all in Edward Bunting’s papers in Queen’s University Belfast MS4. I think that I would not like to try and guess what words (if any) Black may have sung to this tune, or what tune Lynch’s informants might have sung their lyrics to.