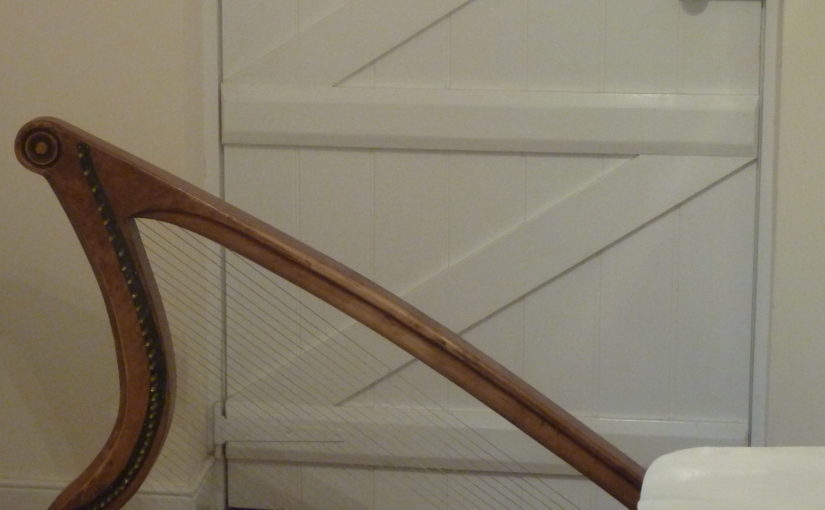 In my video I play the tune through three times. The first and last time I tried to follow the transcription; the middle time I tried adding in a bass note or two and adjusting the rhythm.

The transcription was done by Edward Bunting, and is now in Queen’s University Belfast, Special Collections, MS4.29 page 106/102/111/f50v. Bunting has titled the tune “Peggen a leaven”. There is also a lot of other stuff written on this page which I have transcribed on my MS29 PDF. At the bottom of the tune is a tune list, presumably added much later to fill in a space. There is the name “Mrs. Thomas” which may possibly be connected to our tune.

Other writing is harder to make out and is missing from my pdf. In the left margin is scribbled writing, very hard to read, which seems to include “Anthony” and perhaps “Jointure” and “A[?]a”. At the top is a deleted title “[?]ar[?] [??]e” and perhaps even fainter writing above. Sometimes I think Bunting may have written the title of a tune ready to transcribe it, and then changed his mind and transcribed a different tune beneath.

Along the bottom of the notation there is what looks at first sight like a line of bass notes. However I think these are actually bullet points for the tune list, and I think they are not connected to our music notation.

Note also thet the top left corner of this page is missing; in the online facsimile you can see the corner of the previous page 104 peeping out behind the torn edge.

The tune is pretty clearly notated. It is obviously in 3/4 time, and is in G major pentatonic mode with out-of-mode C and F sharp. There is an additional crotchet noted at the end of the first (and perhaps third) lines but not the second line.

The tune is neatly divided by Bunting into three sections by double bar lines. The first and second section form a conventional enough first and second half of the tune. The third line forms a kind of variation to the second line, reminiscent of the kind of “division” style variation we see in a few of these harp transcriptions, such as A chailíní, an bhfaca sibh Seoirse?

Bunting gives us a slightly different spelling “Peggy an Leaven” on MS4.29 p.232. This is an interesting page of jottings presumably transcribed from the dictation of a harper informant. (You can see my transcript of all the text in my ms29 PDF). At the bottom of the page, we are given two tune titles in a cartouche, but the first has been overwritten and is very difficult to make out. I think it says something like “Coo[l] a[n]aloob / [?]inked hair / Peggy an Leaven” and then beside the cartouche it says “Composed by Harry / Composed by Harry & Ned / in Cromwells time”

The 18th century harper and tradition-bearer Echlin Ó Catháin (O’Kane) gave information about different harpers and he begins his list with “the Four Brothers of the name of Scott who lived in the Province of Munster about two hundred years ago”. Keith Sanger suggests that these four brothers were John, Harry, Ned and Darby. Bunting (1840 intro p.69) tells us about John and Harry, from County Westmeath; he says that John Scott composed the lament for the Baron of Loughmoe (Cumha Caoine an Albannaich, or Scott’s Lamentation) in 1599, and that Harry Scott composed the lament for O’Hussey, Baron of Galtrim (Cumha an Devenish or the Lamentation of Youths). We have information about Ned Scott who was harper to Lord Chichester in 1621.

Do we understand, then, that the song or tune of Peigín Ní Shléibhín is here being attributed to the composer brothers Harry and Ned Scott, in the 1640s or 1650s?

My aim with the Old Irish Harp Transcriptions Project is to work through individual specific live transcriptions on their own terms, and so it can be a distraction to chase too many other versions of a tune. But in this case we should at least acknowledge that the well known song “Bonny Portmore” is a variant of, or based on, the tune of “Peggy na Leaven”.

Other versions of our tune

This transcription on MS4.29 page 106 is the earliest notation of the tune of Peggy Ni Leaven I have seen so far.

in 1798, Edward Bunting developed his p.106 transcription into a piano arrangement, in his unpublished manuscript piano book, QUB SC MS4.33.3 p.61. This is very close to the transcription (it is transposed up one note and the time changed from 3/4 to 3/8) except in bar 6 of each line, the transcription sequence G-A-D has been changed to the equivalent of G-B-D, giving the tune a much more harmonic and chordal sound. This piano arrangement is titled “Pegy ní Sleíbhe – or – Peggy na Leavien” and is tagged at the bottom “From Arthur O Neil”.

The piper James Cody wrote out tune books for Edward Bunting between 1805 and 1810; Cody wrote the tune of “Peggy Iní léibhinn” into QUB SC MS4.33.4 p.14. This is a nice version, a bit less smoothly turning that the harp transcription. Presumably it is a pipe version though it may also be a song air version.

An outlier is “Peggy Levin” in Darley & McCall, Feis Ceoil collection (1914) no.53. A footnote says “The name, as given in Irish characters, is Ní Shleabhin”. Though it is clearly a relative of our tune it has turned into something very different in a strongly D neutral mode.

So how do we decide who was the performer, from whom Bunting made the live transcripton on page 106? Was it Black, and is the Arthur O’Neil tag a later invention, or a vague memory of a performance by O’Neil which was not transcribed? Or is it the other way around, was the transcription done from O’Neil’s playing, and was the Black tag on p.178 simply a note about Black’s repertory? Or is Bunting getting confused already between the “Peggy” tune and the “Portmore” tune, since Black is said elsewhere to have played “Bonny Portmore”?

At this stage I am starting to lean towards O’Neil for this transcription. I have emended my tune list spreadsheet to reflect this. There are a couple of other possible O’Neil transcriptions on the next 3 pages, though as I said before it is dangerous to group together these uncertain attributions otherwise we can use circular reasoning to see groups where there are none.

In my post on Bunting’s collecting trips, there is mention of Bunting collecting tunes from Arthur O Neill in Newry in 1800. But this transcription is presumably from earlier, since we have the piano arrangement apparently derived from it in 1798.

I found a set of words in Dhá Chéad de Cheoltaibh Uladh online at the RIA. However we are not given a tune for this song, and there is no reason to connect these lyrics to our tune except for the title. The first verse is: