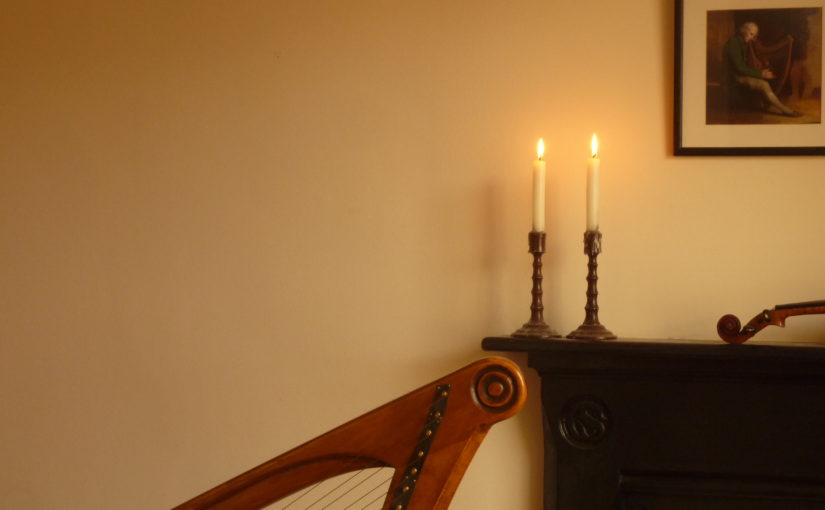 Carolan is said to have composed this tune, for a set of Irish words which were by his friend Hugh McGauran in about 1712:

For some reason this tune and song became well-known in literate Anglo circles. Dean Swift made his famous version around 1720:

In 1724, the tune was published as the most prominent in John and William Neal’s Colection of the most celebrated Irish tunes. The tune in Neal was presented on page 6, titled “Plea rarkeh na Rourkough or ye Irish weding improved with diferent divitions after ye Italian maner with A bass and Chorus by Sigr. LORENZO BOCCHI”. It is the only tune in Neal which is set on two staves with treble and bass.

Many many years ago I tried to play Neal’s setting on the harp, treble and bass, since I was searching for hints of old Irish harp bass style. I think this was totally misghuided; not only is it clear to see that Lorenzo Bocchi’s bass is newly composed for harpsichord or cello, we also have Keane FitzGerald’s eyewitness testimony that “Carolan’s tunes had no bass to them originally”.

This tune also appears in four other 18th century printed music-books: Burk Thumoth in c.1740, Lee in c.1778, Walker 1786, and Thompson in c. 1787. You can see all these with references in my Carolan Tune List Collation spreadsheet.

Attribution of the transcription to a harper

Edward Bunting included a piano arrangement of Pléaráca na Ruarcach in his 1798 “Ancient and Modern” unpublished piano collection (now QUB SC MS4.33.3 and 4.33.2). The tune is in MS4.33.2 p.13. I think this piano arrangement is mostly based on the MS4.29 p.107 transcription, with maybe one or two fragments “improved” by reference to Neal’s printed version. Bunting titles it “Ple Rakeagh na Rourkagh or O Rourke’s noble feast / Translated by Dean Swift” and beneath the tune he writes “From Rose Mooney”.

Bunting published a printed piano arrangement in his 1809 book (p.8), set to Swift’s English lyrics. In his annotated copy of the printed book (BL Add ms 41508) probably in the late 1830s or early 1840s, Bunting wrote “Harp ONeil” beside this tune, implying that he thought then that he had originally collected it from the harper Arthur O’Neill. The 1809 piano arrangement seems also to be based on the ms4.29 transcription, with a few readings interpolated from Neal or other early prints.

So how can we tell who the harper was, who Bunting made the live transcription from? Page 107 is a messy page, with a tune list and other doodles on (transcribed on my ms29 PDF), and with the tune fitted around these other writings, including the title “jigg to the Jointure” and two bars of that tune. This suggests to me that our transcription is later. It seems more competent than some of the earlier transcriptions. There is only one bar line, at the very end; but the rythym is easy to work out from the note stems and beams. Other tunes nearby are tagged O’Neil, but I wonder in this case if it might be Rose Mooney. We have quite a big tune list that is attributed to her, but I have not been finding groupings of transcriptions that can be confidently connected to her.