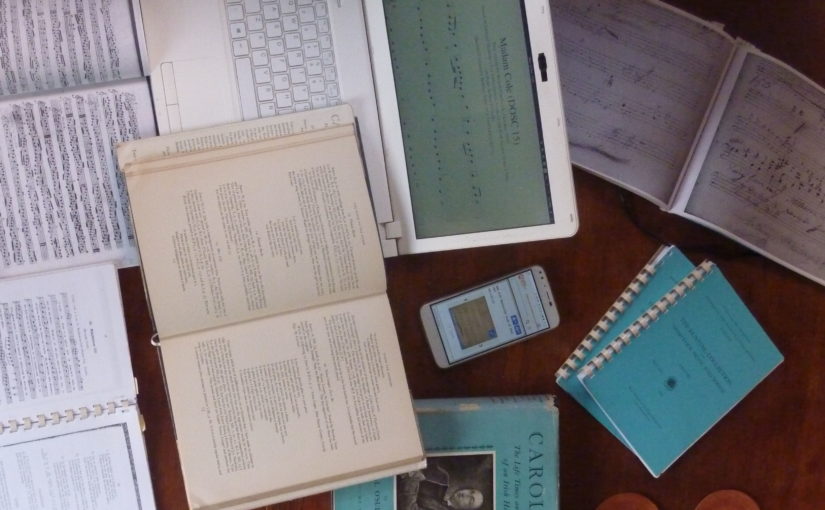 Edward Bunting made a live transcription of the tune of Madam Cole, from the playing of an old Irish harper, probably in the summer of 1796. The transcription is in Queen’s University Belfast, Special Collections, MS4.29 page 149/146/155/f72v. However, the transcription is too fragmentary to reconstruct a performance.

Date and source of the transcription

If we check my tune list spreadsheet, we can see that Madam Cole is tagged in Bunting’s personal copy of the 1797 print, “Harp Oneill”. This book, now London, British Library, ms add.41508, was probably annotated in the early 1840s. There is another annotated copy of the 1797 print in Queen’s University Belfast, which I have never seen, but which Donal O’Sullivan used for his editions in the 1920s and 30s. He says (Bunting part 1 p.55) that is is annotated “Byrne”. My understanding is that the QUB annotated book is a copy of the BL annotated book. Is this a case of a different annotation for the same tune, or has Donal O’Sullivan got it wrong?

The tune title appears in lists of tunes played at the meeting in Belfast in 1792, and it is said that Hugh Higgins played it on that occasion.

My tune list spreadsheet also notes that this tune is in the Autumn 1797 printed book, but it is not in the Spring 1796 proof sheets described by Peter Downey (…publication history…, 2017). This may suggest the transcription was made in the summer of 1796 when we known Bunting was out collecting tunes.

So, was the transcription made from Arthur O’Neill in summer 1796? Maybe.

Edward Bunting made a piano arrangement which was published as no.16 in his 1797 published book, titled “Maighistreas Cole – Madam Cole – Carolan”. You can listen to a performance of Bunting’s classical piano arrangement on Fiachra Ó Corragáin’s website.

Bunting seems to have got confused towards the end of the tune. He also has thrown the beginning of the second half down into the bass register.

We can check my Carolan tune collation spreadsheet to see that there are two different versions of this tune in the Lee book, first published in around 1780. The first is titled “Madam Cole” (or “29” in the Broderip & Wilkinson reprint). The second is titled “Planxty by Carolan”, (or “68” in the B&W reprint). The first is a two-stave harpsichord arrangement; the second is a single line melody, but both of them drop the first two bars of the second half down an octave.

There is a nice version of our tune in the Petrie manuscripts, and it is this version that Donal O’Sullivan used as the basis of his Life Times and Music edition of the tune, where it is no.15. Here it is from the Stanford-Petrie book, where it is no.716. You can see it too drops the first two bars of the 2nd half into the bass.

Donal O’Sullivan presents a song lyric addressed to Mrs. Cole, but his attempt to marry the lyric with this tune seems forced. I don’t see any evidence (apart from the shared title) that this tune is anything other than an instrumental performance version. I assume that the lyrics were originally sung to some tune; that song air may or may not have been related to this instrumental tune in some way. But I don’t see the tune versions that we have here as having much if anything to do with these lyrics.

The transcription of Madam Cole in QUB SC MS4.29 page 149 is obviously a live transcription, written by classical literate keyboard-player Edward Bunting, at speed as a real-time response to the playing of a tradition-bearer, presumably an old Irish harper.

The transcription is mostly just the dots of the tune; only in a few places has Bunting sketched in stems and beams to group notes rythmically.

In two places he has written B below the notation, which is his normal way of indicating bass notes on the harp, often played an octave lower than notated. It is very noticeable that he does not write B or any other bass indication under the first two bars of the second half (the beginning of the third line of notation, on the 4th system on page 149). Did the harper not drop this passage down into the bass? Or was it so obvious to Bunting that he didn’t need to write anything?

We know that “Carolan’s tunes had no bass to them originally” according to an eyewitness, so these two bass notes may be the only bass notes played by the old harpers in this tune.

Bunting also writes “+” at 7 points in the tune. This presumably indicates some kind of trill or articulation.

In his 1797 introduction, Bunting says how he was to “procure, while yet attainable, the most approved copies of tunes already in the hands of practicioners” (i.e. to collect and collate previous printed and manuscript settings of old Irish tunes). And in his 1840 introduction, he says that he went out on collecting trips “for the purpose of comparing the music already procured, with that in possession of harpers in other parts”. So it is quite plausible to imagine him already having a copy of the Lee harpsichord arrangement, and making this transcription just as a kind of “check” on whether the harpers were doing anything particularly different. I think that Bunting often gave more weight to the music in the earlier printed arrangements than to what the tradition bearers were doing; and so it is quite possible that it was his own idea to transpose the harp melody down an octave, following the example of the Lee book.

You can see how this page sits in the manuscript by checking my MS29 index PDF.

The transcription is noted in E minor, so F sharp needs to be tuned on the harp.

As it stands, we can’t just play through the transcription notation because we are missing too much of the rhythm indications. There are also a few places where the dots are a bit too ambiguous.

However this is the Transcriptions project and so I am not going to do that here.

One thought on “Madam Cole”