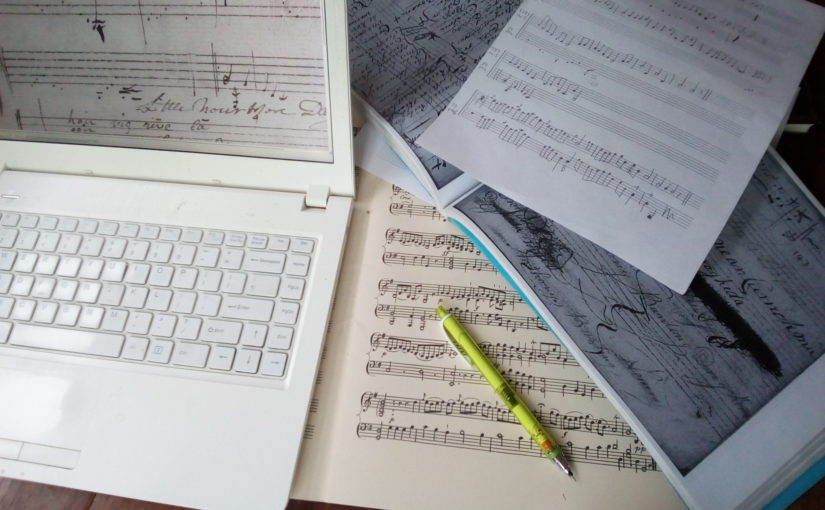 There are two separate transcription notations of Carolan’s Fairy Queen in Edward Bunting’s manuscripts. I don’t think anyone had noticed them before I found them while compiling my MS29 index PDF last year, because they are fragmentary and/or hidden.

I wonder if they were originally together, on facing pages or similar, before the pages and gatherings were shuffled around and then bound up to form Queen’s University Belfast, Special Collections, MS4.29.

The first one is on page 92/88/097/f43v. This page has two layers of music notation, the second written over the top of the first, almost obliterating it.

The first layer of writing on this page is on the top two staves. Bunting has written a tune title “Fairy Queen”, and then there are two lines of faint dots for fragments of the tune of the Fairy Queen. There are a couple of bar lines, and towards the end of the second bar is a double barline and repeat mark, and then the beginning of the last section of the Fairy Queen, which tails off.

My animation tries to strip away the second layer of over-writing, to reveal the underlying first layer:

You can see that there is other writing in the middle of the page. It is not clear to me how this relates to the two layers of music notation. Bunting has written the phonetic Irish titles, and English translations of two other tunes:

The other page of MS4.29 which has part of the Fairy Queen on it, is page 146/143/152/f71r. The top stave of this page has the very end of the Fairy Queen, without title or other text. I really do wonder if this page may originally have been the facing page to page 92. There is a note marked with “B” for a bass note, and there is an octave jump at the end. The only bar lines are at the end of the tune.

You can see my transcription of the rest of the text on this page in my MS29 PDF. I don’t think any of it is related to our tune.

Back in 2015 I made a page on earlygaelicharp.info where I listed all the versions I knew of this tune. You can see on that page that I had not discovered these transcription fragments back then!

The Fairy Queen was first published in 1724, when Carolan was still alive, in the Neal Colection, under the title “Fairy Queen by Sigr Carrollini”. I think this is a baroque violin adaption of the tune.

In c.1748, the Fairy Queen was included in the untitled book that we think was published by John Carolan, son of Turlough. This version has a bass, presumably for harpsichord; eyewitness Keane FitzGerald tells us that “Carolan’s tunes had no bass originally”, and that the basses were composed for this book after Turlough Carolan died.

Other interesting settings are listed on my page, but perhaps most relevant to us is Edward Bunting’s piano arrangement which he printed as no.3 in his 1797 book.

Can we make sense of these fragmentary dots, by collating them against the fuller versions of the tune? Or, can we use the transcription dots, to assess how close or distant from a harp version, these printed versions are?

Collating and understanding these fragments

I compared the transcription versions on MS4.29 page 92 and on page 146, with some of the complete versions. The transcriptions are not a good match against John Carolan’s version, or Padráig Ó Néill’s version; but they can be spotted closely enough to Bunting’s 1797 piano arrangement. However, I cannot closely match some of the dots passages on the end of the first line and in the middle of the second line of notation on p.92. I think there is not much we can usefully say about these dots at this stage. Perhaps a detailed look at the manuscript page, and perhaps even enhanced imaging, might reveal more dots. Or, perhaps there are only these fragmentary snatches of the tune, which itself would tell us something about Bunting’s transcription process, if he dotted fragments and then went back and filled in the gaps on a second hearing?

After the double bar line on page 92, these six notes are much clearer. The first note has been written as a dot, with a stem, and then expanded into a minim, but we might expect it to be a crotchet. The piano arrangement does not have the distinctive octave alternation, instead making this section parallel octaves.

The notation on page 146 seems much more straightforward. There are no barlines except at the very end. Comparing it to the same passage at the end of the 1797 piano arrangement, we see that there are extra notes in the piano version. In fact we can see that the MS4.29 version seems to me rhythmically irregular, as if it was flitting back and forth between 6 time and 4 time. This raises questions about whether the harp performance of this kind of division-style music was as regular as it appears in the piano settings.

It seems clear to me that Bunting’s 1797 piano arrangement is not closely based on any of the earlier printed versions that we have, and so presumably he is drawing on versions transcribed from harpers. It seems far-fetched to suppose that the piano arrangement is derived directly from these fragmentary and over-written transcriptions; perhaps we are missing pages where these dots were expanded into full transcriptions and then neat copies.

In his personal copy of the 1797 book, Bunting writes “Harp O Neill” beside this tune, implying that he thought (in the late 1830s or early 1840s) that he had transcribed this tune from the harper Arthur O’Neil. Is he the source of our transcription dots?

Bunting also wrote other information into his personal copy of the 1797 printed book; on the facing interleaved blank page is a whole lot of information about Carolan which is written in pencil and which I can’t make out in the photocopy I have of the book. Beneath the tune of the Fairy Queen, Bunting writes in pen “This tune is not Carolan’s but was adapted by him from an original melody”. Is this traditionary information from O’Neil, or is it Bunting’s own speculative theorising? Bunting was a bit exercised by the relationships between the Fairy Queen; the song air Ciste no stór; the baroque violin tune “Cuckoo” which appeared in Neal; and the song air “My bonny cuckoo”.

It is possible that there is a connection between the tune of the Fairy Queen, and Carolan’s song lyric beginning “Imreas mór a harla eidir na righthibh” (A great contention arose between the Queens).

In 2015 I made a PDF setting out all the different interconnected tunes and lyrics in this sprawling family of tunes.