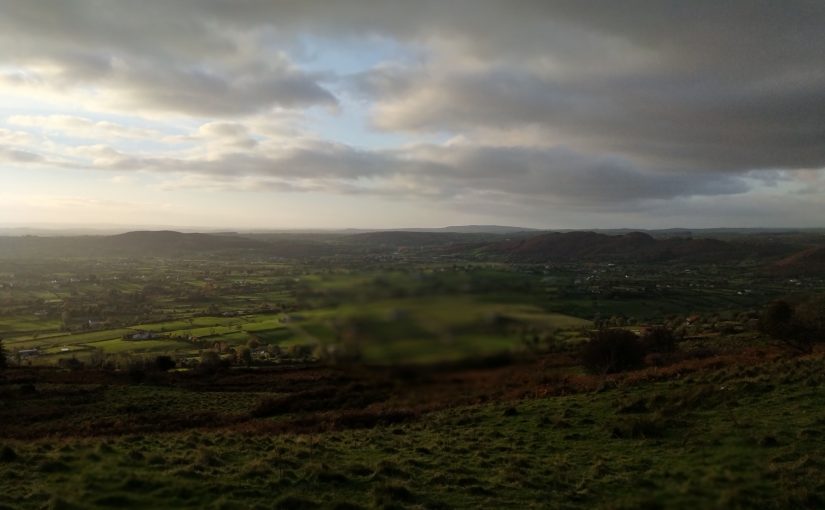 There’s a group of four tunes that Edward Bunting notated apparently live from traditional informants, on pages 92 to 94 of his little collecting pamphlets in the 1790s. I’ll do a series of four posts looking at each of these tunes in turn.

First up is A bhean dubh rún dileas. The live transcription notation is on Queen’s University Belfast, Special Collections, MS4.29 page 92/88/097/f43v. We have already discussed this page because it has the abandoned transcription dots of the Fairy Queen. But today I want to study the other tune on this page, which Bunting wrote over the Fairy Queen dots, obliterating them.

At the top of page 92 there are the abandoned dots of the Fairy Queen. In the middle of the page there are some titles: “Little hour before day / hoir vig riúe lá / the little hour before day”. This refers to the tune on page 94 which we will look at in due course. And then another title “Ialluin vig Moinagh / the little Munster Mantle”, which refers to the next tune on page 93. And finally a third title “FVaunderoon Deelish” which is the title of our tune.

At the bottom of the page underneath this last title, Bunting has written what looks to me like a live transcription notation of our tune. It looks like it started as the live dots, made at speed as the traditional informant played or sang. Then Bunting has expanded these dots by adding note stems, beams, and barlines.

Finally, Bunting made a neat copy of the tune at the top of the page, overwriting and obliterating the abandoned dots of the Fairy Queen.

This notation seems to me to be corrupt. It seems to be in G major, but I can’t tell if it should have either F♯ or F♮. I have made two machine audios, both of the live transcription notation at the bottom of the page, one with f sharps and one with f naturals. Either of these would be a plausible harp tuning, but neither is very convincing here.

If we look up at Bunting’s neat copy at the top of the page, he clearly writes a natural sign (♮) against the first high F in bar 3 of the neat copy, implying this F is natural while the others are all sharp. It is possible that this live transcription derives from a vocal performance which had both F♯ and F♮ at different points. However it is also possible that Bunting has got everything completely wrong.

The C in the second bar looks like it may have been deleted in the transcription. We can see in the neat copy that this C in bar 2 has been written in and then deleted. So I assume that the informant played or sang this note, but Bunting decided he didn’t like it. There are other notes that seem to have been adjusted or overwritten. It is all very unsatisfactory.

Bunting made a piano arrangement of this tune, which was published as no.40 in his 1797 book. The title there is “A bhean dubh rún dileas dubh / The Dear Black Maid”. He has basically followed the neat copy at the top of page 92, with some Fs sharp and some flat; but he has also inserted an extra “chorus” section of four bars to expand the tune to 16 bars. I don’t think we can learn anything useful about traditional harp style by looking at Bunting’s piano arrangement.

Other old books include variants of our tune under the title “The Bonny Black Irish Maid”. e.g. Cooke in the 1790s; Mulhollan in 1804; O’Hara in 1813 (says it is by Carolan). These other versions turn differently to Bunting’s version, and they all include the four extra bars in the second half.

Many commentators say that Fhalaingín Mhuimhneach (the Munster coat or mantle) is the same as the second half of the Bonny Black Irish Maid. Of course since our page 92 live transcription version has fewer bars in the second part, this comparison is not true for us here. Our version on page 92 seems to have only one bar (bar 9) reminiscent of An Fhalaingín Mhuimhneach.

Donal O’Sullivan , in his Bunting part 2 (1930) prints our tune with a set of words titled “Bean dubh na rún”, but this title is different enough from our title “A bhean dubh rún dileas” that I think O’Sullivan may have made a mistake here. The words were collected from the singer Pat MacDermot in Castlebar, county Mayo, by the song collector Patrick Lynch in the summer of 1802. Lynch, as usual, does not tell us what tune was used to sing these words. You can see Lynch’s neat text on QUB SC MS4.7.136 and his English translation on QUB SC MS4.32 p.52.

Tom Moore used the tune from Bunting’s piano arrangement for his song “How oft the Banshee cried” in his 2nd volume.

Bunting’s initial phonetic title for his live transcription dots is “Vaunderoon Deelish” which matches fine with his published title “A bhean dubh rún dileas” and which literally means, Oh dark dear loved woman. He seems to have an extra intrusive “dubh” at the end of his published title by mistake.

Notice the V of Vaunderoon is written over a F, as if he had originally written “Faunderoon”.

Under the live transcription dots on page 92, he has written in pencil an English version of the title: “Bonny Black Irish Maid”, which matches the published titles of the expanded variants mentioned above. Perhaps Bunting wrote this pencil English title in after he had found the tune in these printed books, and used the printed books to add in both this English title, and also the extra 4 bars to the second half for his 1797 piano arrangement?

Attribution to an informant

There is no attribution information on page 92, as usual. In the early 1840s, over 40 years after his collecting trips, Bunting wrote attributions into his own copy of the 1797 print. Against our tune he writes “Ballynascreen / perfect”, and at the bottom of the page under the next tune he adds “both very ancient”. Ballinascreen is the area between the Sperrins and Slieve Gallion, on the border between county Derry and County Tyrone. We know that Bunting was out collecting tunes in Ballinascreen in the summer of 1792, and so it is possible that this is when he got this tune, but I don’t know if we can really trust his memory or filing system to retain this information for almost 50 years. So my conclusion is that I have no idea who Bunting’s informant was for this tune, whether it was a harper, or a singer, or what.