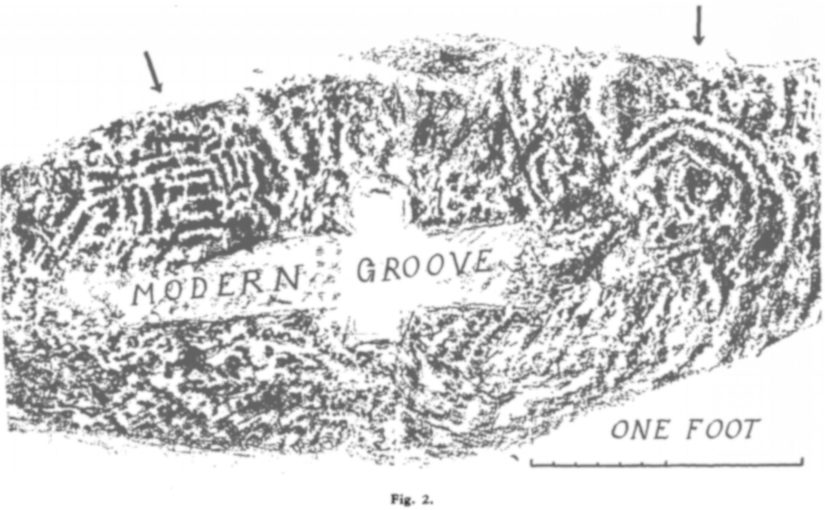 Bunting has written two tunes on Queen’s University Belfast, Special Collections, MS4.29 page 220/218/227/f108v. At first they seem clear, with clearly written titles. But I cannot find other versions of them, and I do not know if these are harp transcriptions, or fiddle or vocal performances that Bunting has transcribed.

The first tune on page 220 is headed “Jacky Taaffe” which I presume is its title. I have a sneaking feeling this might be a fiddle tune. Bunting has barred his transcription but he has not written in note lengths. So we really don’t know the rhythm or timing of this tune. It could be in 6 time or in 4 time. My machine audio just plays the note values as written so that all the bars are different lengths.

I think that this tune must be notated at pitch, with no sharps or flats, and that would make it in D minor. But I am not entirely sure about this.

I don’t really have anything more to say about this tune. Perhaps if you recognise either the title or the melody you could let me know by email or in the comments below?

The second tune on page 220 is titled “The Blooming hill of Cuin ma Caunte” and beneath the tune this title is reinforced: “The Blooming Hill”.

it is, of course, quite possible that this title has no connection to this tune, because of Bunting’s inconvenient habit of transcribing a tune, and then writing the titles of other, different tunes above his transcription notation. But this title is very interesting and can give us a lot to investigate.

First, here is the transcription:

Bunting has started with the transcription dots, and has added stems, and barlines, just like for Jacky Taaffe. But he has gone one step further here, by adding rests, squeezed in between the notes, to show us that this tune is in 6 time. This means my machine audio can silently expand the bars with only two notes in them (i.e. the last bar of each line), which I did not dare to do with Jacky Taaffe.

I think it is pretty clear to me that this tune is notated at pitch in D minor, but it really needs the B flats. However you may disagree… let me know as usual! To me this indicates that it is probably a vocal version, transcribed from a singer.

The tune forms a nice six-phrase melody suitable for a six-line song.

Patrick Lynch collected a text for this song on his collecting trips to Mayo in 1802. His neat presentation copy of the song is in QUB SC MS4.10.119 and 120. He has titled the song “Ur chnoc Ciain mic Cainte” and then he has written “a very fine song”.

In her book A Hidden Ulster (2003), p.228-237 Pádraigín Ní Uallacháin gives the text, translation and a very detailed and comprehensive commentary on the song. This song of sweet seduction and bawdy rebuff was composed by the poet Peadar Ó Doirnín. Ní Uallacháin explains very clearly how it is now traditionally sung to a tune that was first married to the words in 1907, and you can hear that version sung on the Oriel Arts website. But could our transcription be a different, older melody to this song?

Donal O’Sullivan published an edition and translation of Lynch’s 1802 text (censoring the last couple of lines) in his Bunting part IV, 1932, p.73-74. He tried to set the words to a tune which Bunting had published in 1809 p.23, which Bunting has titled with the same first line of the song, “A phlur na Maighdion”

In the annotated copy of the printed book (BL Add ms 41508), probably in the 1830s, Bunting wrote at the bottom of this page: “I love my bonny sol[dier] where ever he does go / got at Walworth in the County Derry. The seat of the Beresfords / a lovely melody indeed”. Walworth is about 10 miles south-west of Magilligan – did Bunting stay with the Beresfords while he was visiting Denis O’Hampsey in 1792 and/or 1796?

The words printed by Bunting are said to be “written for this work, from a literal translation of the original Irish, by Dr. Drennan”. I presume this means that Dr Drennan had Lynch’s English translation in front of him, and used it as inspiration for his own English poem.

I have made a machine audio of this piano arrangement, since this seems to be our only source for this melody. You can try to compare this with the transcription on MS4.29 page 220 above.

This kind of thing is a salutory reminder of what was going on in Edward Bunting’s head; he thought that this was an appropriate and good way to present this old Irish song air. This is the kind of thing he was aiming for when he was out in the mountains and bogs with his little collecting pamphlets, transcribing the dots from country singers and old harpers.

The hill of Cian mac Cáinte

Pádraigín Ní Uallacháin (in A Hidden Ulster p.231-2) discusses the place called Cnoc Chéin mhic Cáinte. Now known as Killin, it was pretty much destroyed by limestone quarries in the 19th century. Old archaeological reports describe a pair of hills, each with prehistoric stone monuments on top, including a passage tomb. My header image shows what seems to be one of the decorated stones from the passage tombs, which now lies on the hilltop. You can see a map and read more at the Historic Environment Viewer website. (If it doesn’t zoom straight to Killin Hill, go to the “Query data” panel on the right, make sure “Sites and Monuments Record (SMR)” is selected, and then go to the bottom of that panel and enter LH006-015001- under “Search by Record Number”. Click the two red dots on Killin hill for multiple panels of information and references.)

According to tradition, the poet and harper Pádraig Mac Giolla Fhiondáin held a school of poetry on the hill, where poets and literary people would gather. It is easy to imagine them sitting inside the passage tomb, though perhaps they met at a house on the slopes of the hill. Pádraig’s son, known as Patrick Lindon, was the uncle and harp teacher of Patrick Quin from Armagh.