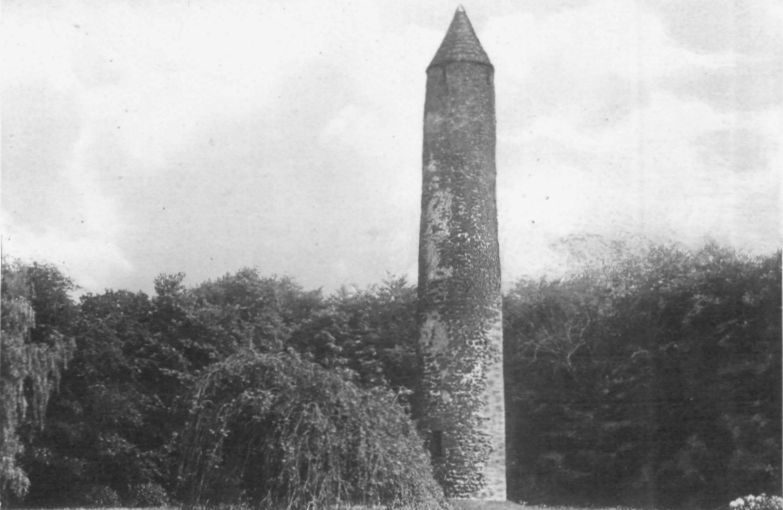 Beneath the tune, someone has written what I take to be the title for this tune: “is aoiḃin, aoiḃin cleachach aointrim / ah! how handsome the steeple of Antrim is”. I think this may not be Bunting’s handwriting; whoever wrote it seems to have been literate in Irish, writing the letter b with the dot (for bh).

This is a line from the song of “An bile buadhach”. Bunting later published a variant of the tune under that title in his 1809 book. But first of all let us look at the transcription.

You can also download my PDF typset version which I used to generate the machine audio.

The transcription seems difficult in places; We can see all of the note dots clearly enough, but Bunting has struggled with the rhythm and inserts rests and barlines in some attempt to get to grips with it. It is hard to understand what he means. My guess is that this tune was quite “un-metered” and did not have a regular strong beat count.

I am not entirely sure how to describe the scale. It seems to be a kind of D major, but the very strong “out of mode” G gives the tune a distinctive sound.

Bunting does not seem to have done anything with the p.218 transcription, but he did transcribe a different version of the tune elsewhere in his transcription notebooks. This other transcription is on QUB SC MS4.29 page 143, at the very end of “part 2”, the first four-stave section of the manuscript (see my PDF index). I believe these two 4-stave sections were mostly collected on Bunting’s collecting trip to Mayo with Kirwan in summer 1792. The page is very dirty because it must have spent a fair amount of time as the outside page of an unbound pamphlet or notebook.

The transcription on page 143 is headed “billy voagash McConnell”. In the space in the middle of the page Bunting has written something I can’t make out. What is the first? Iieru? Tierce? Iuru? And the second looks like “Major” but is over-written – “Moi”? He has also doodled a bit upside-down at the bottom of the page, Ma[???]y[??]y Major. Perhaps this is all just part of Bunting’s psychadelic doodlemania.

You can download my PDF typeset version which I used to create the machine audio.

This page 143 “bile buadhach” transcription finishes in the middle of system 2, and then Bunting immediately starts a neatened and regularised copy of the tune, as the first step in de-traditionalising it for making a classical piano arrangement.

Bunting developed the page 143 “bile buadhach” transcription in a few different ways. In his 1798 unpublished piano manuscript, he has a piano arrangement that seems to be based on this transcription. We can see that he has really straightened out the tune and the rhythm to make it work on the piano:

He titles it “Bighly boadh gagh – one of the Mourne tunes” and underneath he makes a note to himself: “make a Cannon two in ye one unison” and at the bottom he writes “From ………………….. at Lord Clanbrassil’s in 1793“

Bunting did make a canon, and it is in the notebook he took with him to Westport on his collecting trip in 1802:

His title here is “Canon two in in the one unison 8th below” and he also makes notes to himself “new / old / best” as if he was tweaking it as he went. Did he compose this on his trip in the summer of 1802? Does that imply that he was carrying his old piano notebooks around with him when he was travelling?

Bunting finally published a piano arrangement in his 1809 collection, on page 71. His title here is “Bille buadhach – The victorious tree”. In his own annotated copy of the print (now London, BL Add ms 41508), Bunting has written “got at Briansford in 1796”.

Mabel Dolmetsch played a version on her unreleased 1937 recordings of old Irish music played on an Irish wire-strung harp. I presume she based her very lush classical arrangement on Bunting’s 1809 print.

This recording doesn’t tell us anything about old Irish harp style or traditions, but it’s a fun bit of revival history.

I think the main thing we can take away from Edward Bunting’s (and Mabel Dolmetsch’s) classical derivatives of this second version, is how it shows us the structure, with four uneven lines, the fourth line having a slightly extended ending.

Donal O’Sullivan discussed the song and tune in his Bunting Collection part vi, 1939, p.94-6, starting from Bunting’s 1809 piano arrangement. He prints a set of words and his own partial and inaccurate translation. He has sourced the words from Patrick Lynch, who made a rough copy (perhaps a live transcription) in a pamphlet, now at QUB SC MS4.26.43f.

Lynch subsequently made a neat presentation copy of the words in QUB SC MS4.10.132, changing the spellings of, or re-interpreting, some words:

Lynch also made an English translation which is now in QUB SC MS4.36.6:

O Bile Bile on the hill of cold blasts
an inormous tree, o bo! what a trunk
oft were knockt down by yr shoulder
the bouncing boys of Mutterevlin

The four stanzas don’t really go together and may be conflated from different songs, though they were obviously sung to Lynch by his informant as a single coherent song performance. The first stanza is about the death of the old tree; the second stanza praises the tree; the third stanza is about seeing a boat sailing on the Lough; and the fourth stanza is in praise of the round tower.

This also raises questions about the words that might have been sung to the tunes transcribed by Bunting. The two tunes are very close, and their titles connected to different verses of this song text, but we can’t assume that it all fits together as a coherent whole.

It’s important to remember that these three items (Bunting’s two tune transcriptions and Lynch’s words) are just three independent and unconnected “snapshots” from what is most likely a very fluid and diverse range of variants in the living tradition a bit over 200 years ago.

The two different tune transcriptions must have been collected from different informants at different times.

The page 143 (“bile buadhaich”) version of the tune has attribution tags connecting it to Lord Clanbrassil’s house at Bryansford, near Newcastle, county Down, at the north edge of the Mourne mountains. Does “one of the Mourne tunes” refer to one of a set of tunes Bunting collected in this area?

The tag “McConnell” on the transcription page 143 might possibly be the name of the informant. I don’t know if we can accept that Bunting took his 1792 Mayo song collecting pamphlet with him on a trip to Bryansford in 1793 or 1796, and jotted the tune from McConnell on the blank end page.

Should we understand “McConnell” to be a misunderstanding of the name of MacDonnell, a piper whose name Bunting puts against a number of tunes in his 1840 index, usually with the date of 1797? Or is it just another bit of writing that is totally unrelated to the music notation next to it?

The page 218 “cloigtheach Aontroim” version of the tune is not developed anywhere else and so there are no tags against it.

Lynch’s song text also does not have any tags or suggestions of where he may have got it, though it is likely to have come from a third different informant in a third different place and date from the two tune transcriptions that Bunting made. Lynch’s earliest rough version of the words (possibly his field transcription) is in MS4.26, which is a collection of loose sheets and pamphlets. I suppose that a proper study of Lynch’s work might be able to group the songs in these pamphlets and make suggestions as to where he got each of them. We know he was in Mayo, in Westport, Castlebar, and around there, and we also know he went to Magilligan and collected song texts there. I think all his song collecting for Bunting was done in 1802.

The song refers to areas around Lough Neagh. My map shows where I think the places in the song are located (in orange), as well as places associated with the other tune on page 218, Bonny Portmore (in blue).

Verse two mentions “gasraigh … muinter reibhlein” or “boys of Mutterevlin”. I have shown the ancient lands of Muintir Doibhlin (the people of Devlin) on my map, south of the Ballinderry river (there are two Ballinderry rivers, one each side of the Lough).

At the start of verse two, the song describes the tree, “chnuc an fhuar bhuil”, which Lynch translates as “on the hill of cold blasts”. I’m not finding a very plausible placename, and it may just be descriptive. (Thanks to Denise and Malachy for also considering this – they came to the same conclusion). But if you know of a “cnoc an fhuar bhuil” somewhere near Lough Neagh, let me know in the comments below.

The “steeple of Antrim” is an early medieval round tower, just to the north of the modern town. It is now set in the grounds of a country house, and I have to say it does look very handsome and charming.

The Hill of the O’Neil is in the centre of Dungannon town, and there is now a modern visitor centre there which is worth visiting to learn about the history of the O’Neils.

It is of course possible that I have mis-identified these place names, but I have yet to find any other places that are plausible matches for the forms that Lynch writes in his three different manuscript versions.

It strikes me that there are a number of interesting parallels between these two tunes or songs:

I think that the tree and places connections are rather subtle and the non-Irish-speaking tune collector Bunting would not necessarily have realised. These are more the kinds of connections that would be in the mind of an insider, a tradition-bearer. I wonder if Bunting was given the tune of cloigtheach Aontroim in the same session as Bonny Portmore? Was it Daniel Black the harper who sang Is aoibhinn aoibhinn cloigtheach Aontroim for Bunting at Glenoaks in the summer of 1796?