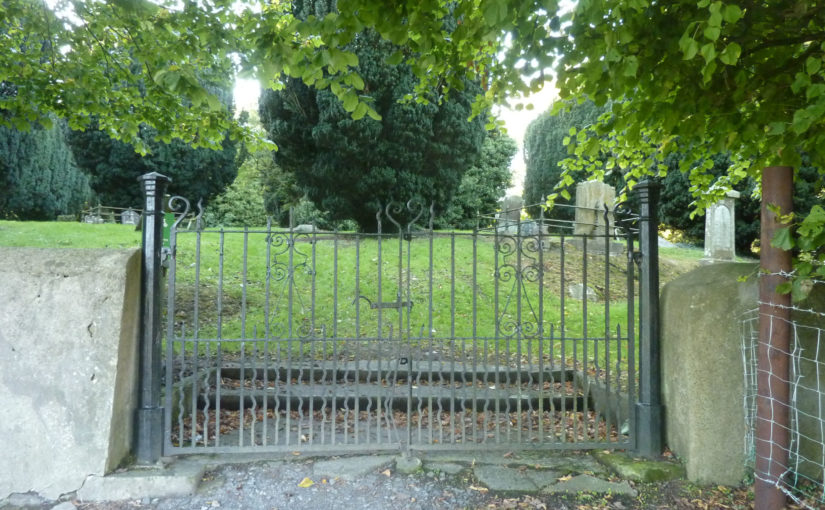 Edward Bunting made a live transcription notation of the tune of “Bonny Portmore” into one of his collecting pamphlets in the 1790s.

The page is headed “Bonny Portmore”. Scribbled out at the top left are other words which I can’t make out. In the middle of the tune, Bunting has written “Anthologia Hibernia / Maisterton Anthony”, and after the tune he has written “Maisterton a real old Irish / Tune”. (I assume that this refers to the tune of Lady Maisterton). Then he has written the tune and a line of words from “An Bíle Buadhach” which I will look at in my next post.

You can download my PDF typesetting of the manuscript transcription which I used to generate the machine audio.

Even though there are no bar-lines, this seems a very clear and un-contentious transcription. The only question mark comes at the 7th and 8th notes of the second system, where Bunting appears to have overwritten a possible original D-B quavers with a heavier A-F. This is a light, unstressed pick-up kind of passage and so perhaps it is possible that his informant played it either way round on different repetitions. But it is also always worth bearing in mind the possibility that Bunting was already engaging his classical piano arrangement skills to “improve” the tune right there in the transcription pamphlet.

The double repeat mark at the end of the first section seems to be a stylistic oddity, as it is found like this with no closing repeat mark at the end, in many other tunes in the manuscript. My machine audio repeats the first half, but in my video demonstration I follow the structure of the song words, and play straight through:

The tune of Bonny Portmore appears in two piano arrangements much later, in a manuscript in the 1830s, and in the printed collection of 1840. In both arrangements it is tagged as being from Donald Black at Glenoak in 1796.

There is some confusion and ambiguity because Bunting seems to get mixed up between the two very similar but distinct tunes, “Peggy na Leaven” and “Bonny Portmore”. I discuss this a bit on my Peigí Ní Shléibhín blog post. We see this most clearly in the 1830s piano manuscript, where both titles are used to head the “Portmore” tune.

Here is the manuscript from the 1830s. It is titled “Peggi ni Leavan or Portmore Bonny Portmore, ^ (Lord c Marquis Hertford’s seat near Antrim) / very Ancient / date, & author / unknown” and at the end it is tagged “From Donald Black at Glenoak in 1796”. None of this seems to be in Edward Bunting’s handwriting.

Bunting printed a similar arrangement in his 1840 book (no.109 on page 80). He gives a commentary on page 97 of the introduction where he also gives it both titles, “Peggi ni Leavan, or Bonny Portmore”. In the index page v, under “name in Irish characters” he writes “Peggi ni labhainn”, under “name in English characters” he has “Peggi ni leaven”, and under “translation” he has “Bonny Portmore”; and then on the index page vii, he writes “Bonny Portmore … very ancient, author and date unknown, D. Black, harper, at Glenoak, 1796”.

Donal O’Sullivan is no help; in his posthumous 1983 volume (p.156-7) he takes the confusion even further, printing Bunting’s 1798 manuscript piano arrangement of Peigí Ní Shléibhín under the title “Bonny Portmore”.

To be clear: I consider Peggy na Leaven and Bonny Portmore to be different tunes and different songs. Bunting collected them from different harpers at different times and places. It was Bunting himself, later on, at the piano, who merged them together into a combined hybrid melody.

If we check my Old Irish Harp Transcriptions Project Tune List Spreadsheet, and my MS4.29 index and transcript PDF, we can see that the transcription of Bonny Portmore on page 218 sits in a rather confused and mixed area of the manuscript, surrounded by unidentified transcriptions, and tunes copied from books, and taken from singers or instrumentalists. So we don’t get any clues from here about Bunting’s source for the tune of Bonny Portmore.

But if we collate the piano arrangements and tune list tags, it seems to me to be most likely that Bunting got this page 218 transcription version of Bonny Portmore from the harper Daniel Black at Glenoaks (or Glendaragh), near Crumlin, in the summer of 1796.

There is a tune list giving the titles of tunes collected from Black, on Page 178. The tune list says “Peggen a Leaven Daniel Black”, but if we consider that Bunting doesn’t understand the difference between the two tunes, then perhaps this might also refer to this tune of Bonny Portmore?

Portmore Castle was supposedly built in the 1660s by Edward Conway, 1st Earl of Conway (c. 1623 – 11 August 1683). Conway had no heirs and the title eventually passed to the Marquess of Hertford, hence Bunting’s confused note in MS4.13

The castle is completely vanished now, but next to it is the old churchyard and ruined church. It is usually called Ballinderry old church, but it seems to have had an old name of Laa Loo, some kind of corruption of a dedication to St. Lau, but I am not finding good information about any of this. The churchyard is in a very spectacular location on the shore of Lough Beag, apparently on what used to be a seasonal island before the drainage channel was cut to try and drain Lough Beag into Lough Neagh.

My map shows the old churchyard, the approximate site of the castle, as well as Mr. Heyland’s house at Glenoaks where Bunting said he collected this tune from the playing of Donald Black in 1796:

This is also the area connected to the old song “it’s pretty to be in Ballinderry”. You can see Lower Ballinderry village just to the south-east of Portmore, and Ram’s Island is the long thin island in Lough Neagh. But that’s for a different blog post one day…

My map also shows places connected to the the other tune on MS4.29 p.218, Is aoibhinn aoibhinn cloigtheach Aontroim. I will discuss the connections between these two tunes on my next blog post, about that tune.

In his 1840 book, page 97, Bunting prints one verse of a traditional song:

Bonny Portmore, you shine where you stand,
And the more I think on you, the more my heart warms;
But if I had you now, as I had once before,
All the gold in all England would not buy you, Portmore

But he doesn’t tell us where he gets these song words or the traditionary information about Portmore that he gives on that page.

First of all we can recognise that the tune of Peigí Ní Shléibhín is a close variant of this tune of Bonny Portmore, and you can read more at the linked blog post.

Second, the song of Bonny Portmore is part of a giddy stramash of different threads which are far too big for me to untangle here, with different placenames being praised including Portrush and Kilkenny, and different tunes or themes incorporating this Portmore stanza. I was especially interested in the Scottish variants which take it off in a completely different direction:

And that’s not even mentioning the connection to “My heart’s in the Highlands…” If you want to follow up on any of this I would suggest that you start with this discussion on Mudcat Café which will give you lots of leads. I’ll not say more about that; I have to stay focussed on harp transcriptions, otherwise I could spend half my live chasing that kind of digression…

Other versions of our song tune

Oh, Bonny Portmore, you shine where you stand
And the more I think of you, the more I think long
If I had you now as I had once before
All the Lords in old England would not purchase Portmore

Oh Bonny Portmore, I am sorry to see
Such a woeful destruction of your ornament tree
For it stood on your shore for many’s the long day
Till the long boats from Antrim came to float it away

All the birds in the forest, they bitterly weep
Saying “where will we shelter or where will we sleep?”
For the oak and the ash, they are all cutten down
And the walls of Bonny Portmore are all down to the ground.

O Boyle prints the words of three verses which he had collected and recorded from the traditional singer, Robert Cinnamond, who lived locally, between Ballinderry and Glenavy. However, though the words are Cinnamond’s traditional version, the tune that O Boyle sets them to is not. O Boyle says “Robert’s air for the song was obviously an impoverished version of the tune given by Bunting”, and so instead of printing the melody that Cinnamond sung, O Boyle sets Cinnamond’s words to Bunting’s classical-ised melody with its final line interpolated from Peggy Ni Leaven.

I understand from various sources such as the Mudcat thread linked above, that O Boyle’s printed version of the text and tune was used as the source for many traditional singers especially in Canada, this version becoming a very well known and popular song. I think this is why people usually sing the song it nowadays to Bunting’s modified classical piano melody.

Robert Cinnamond’s recording, made by Seán O Boyle for the BBC in 1955, was included on the Folktrax cassette FTX-157 Not a word of no surrender in 1980. But it doesn’t seem to have been re-released anywhere else and is very hard to get hold of. I am very grateful to the staff at the Vaughan Williams Memorial Library who enabled me to listen to Cinnamond’s recording. The words that Cinnamond sings on the recording are slightly different from the text printed by O Boyle, though they are close:

Bonny Portmore, you shine where you stand
And the more I look on you, the more I think long
If I had you now I had once before
All the Lords in old England could not purchase Portmore

Bonny Portmore, I am sorry to see
Such a woeful downfall of your ornament tree
For it stood on your shore for many’s the long day
Till the long boats from Antrim came to float it away

The birds of the forest, does bitterly weep
Saying “where will we shelter or where will we sleep?”
For the oak and the ash trees, they are all cutted down
And the walls of Portmore are down to the ground.

Cinnamond’s melody is very interesting as an independent witness to the melody of Bonny Portmore, from a very respected tradition-bearer. His melody is fairly close to the page 218 transcription, though he turns the melody higher in the middle of each line. I have been influenced by Cinnamond’s structure, rhythm and pacing in my video demonstration above.

There is another traditional recording sung by Eddie Butcher in 1970. But I haven’t managed to hear this yet. I understand it is in the Hugh Shields collection at the Ulster Folk & Transport Museum collection, No.7009. It will be very interesting to see what text and what melody Eddie Butcher uses, and how he handles them.