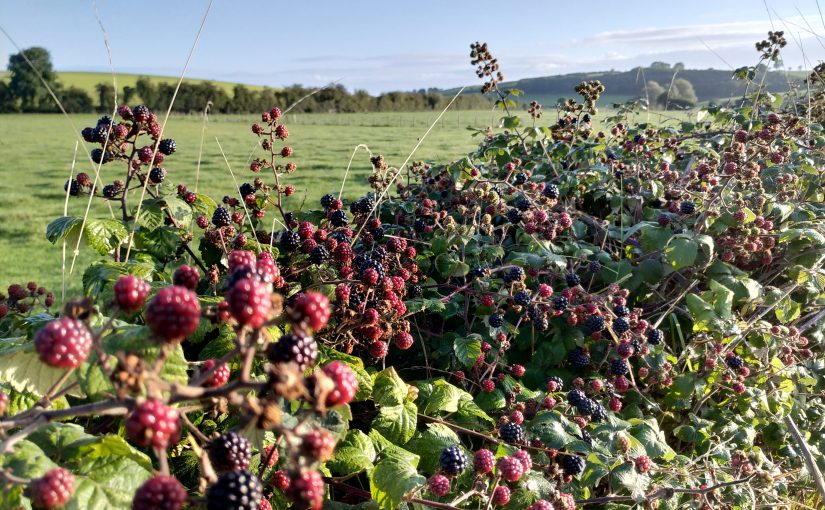 Some time in the 1790s, Edward Bunting made what looks like a live transcription notation of the tune of Miss Kelly.

Bunting’s transcription is on Queen’s University Belfast, Special Collections, ms4/29 p. 10/10/019/f4v, in the form of just dots, plus a few barlines. Bunting has interpreted these dots into a neat copy of the tune on the facing page 11/11/020/f5r.

Both the live transcription dots, and Bunting’s neat copy, are unusual in having a time signature. Rather concerningly, the two time signatures are not the same. The transcription dots have a time siganture of 2/4 while the neat copy seems to be in 6/8 (though the 6 might possibly have been corrected from a 2). Bunting does not normally write a time signature into these transcriptions and neat copies. It is not clear to me what the significance of these is. The most obvious conclusion is that he was struggling to understand the rhythm of the tune. Was the harper informant playing it in an unmetered way?

Bunting has also written a misleading title at the top of page 10, “Carolans Receipt”. Again this title has no connection to our tune. I imagine that he noted these titles as part of the collecting session, perhaps as reminders to himself of tunes that he wanted to collect, or perhaps indications that his informant for Miss Kelly also had these other tunes in their repertory.

Anyway, let us look at the transcription notation. My machine audio (and the typeset PDF that generated it) skips the first line of dots and plays from the second line. I think the first line of dots is an initial attempt to transcribe the performance, but there are some errors which Bunting corrected but then he must have given up and started a clean transcription on the second line.

There’s a strange thing on the third line of notation. It seems to me that the harper repeated themselves from the start of the tune, but with new material from bar nine. Bunting must have listened to the repeat and only started dotting again when new material was played. You can see him stumbling to get the first note right in this section.

I have set the machine audio and PDF typesetting one note lower than the manuscript. You can see on my Old Irish Harp Transcriptions Project Tune List Spreadsheet that Miss Kelly sits at the end of a sequence of tunes which all appear to be transcribed in keys that don’t work on old Irish harp, but if we bump them all down one then they all sit in typical traditional Irish harp keys.

Later developments of the tune

I would consider the neat copy on the facing page 11 to be the first step in Bunting’s development of the tune. He has changed the time signature to 6/8 and he has neatened up the flow of the tune. I don’t know how we could decide whether this was based on or influenced by Bunting’s memory of the traditional informant, or if he is starting to de-traditionalise it and bring it into his own keyboard-based aesthetic world. Or even, if he is using a previous published version of the tune as a crib, to create a new synthetic neat version taking readings from previous arrangers and combining them with what he had transcribed from his traditional informant. In either case, we can recognise it as a neat copy, with larger carefully drawn note heads, quite different from the hasty dots on page 10 which may well have been dotted live at speed as a direct reaction to the playing of the informant. The neat p.11 notes seem to have been done slower and with conscious thought. Bunting has also tweaked it in a few places, especially the final cadence ending.

Bunting published a piano arrangement of this tune in his 1797 book, as no.21. His title there is “Plangstigh Cheallaidh / Planxty Kelly – Carolan”. He has transposed it up two notes from where the transcription and neat copy are written, making it in F major for the piano. Although it does seem to be based on the ms29 notations, the melody has been further tweaked in various places.

I haven’t made a machine audio of this because I don’t believe we can learn anything about traditional old Irish harp style and idiom from listening to Bunting’s classical arrangement choices.

Much later, probably between the publication of his final book in 1840 and his death in 1843, Edward Bunting went back through his earlier printed works and wrote manuscript annotations into the margins. Karen Loomis found the annotated 1797 and 1809 books in the British Library; there is another annotated 1797 in QUB Special Collections which seems to have been made as a duplicate of the BL one. In the annotated 1797 in the BL, Bunting has written two new pieces of information. At the top of the tune he has written “Harp Byrne” and at the bottom he has written “composed for the Kelly’s of Cargins in the county Roscommon”. He has underlined the word “Cargins”.

This gives us two things to think about. First, the suggestion that (presumably) Charles Byrne was the informant. We can see from the tune list spreadsheet that three other adjacent tunes in the manuscript, also have later “Byrne” attributions (though two of those are dubious or contested). The very next tune previously is Planxty Drury, and on the page before that we have The Beggar and Planxty Irwin.

Second, we can think about whether our tune was originally composed by Carolan for Miss Kelly of Cargins. We have information from Hardiman (vol I p.liii) who refers to “Mr Kelly at Cargins, near Tulsk, in the county of Roscommon, an old and hospitable friend (of Carolan) whom he celebrated in his ‘Planxty Kelly'”.

Donal O’Sullivan is worse than useless in his Carolan: The life times and music of an Irish harper (1958). He gives our tune as no.71 but he gives it a spurious invented title “Hugh Kelly” and tries to connect it to song words composed by Carolan for Hugh Kelly of Ballyforan. He even quotes Bunting’s information about the Kellys of Cargins, presumably copied from the QUB annotated 1797 print, but he chooses to disregard this information.

Carolan composed a lot of Kelly tunes; there were a lot of Kellys around in County Roscommon, and so I suppose it is impossible to even guess who the tune was composed for.

There are a few other versions which may well derive from Bunting’s 1797 print. But perhaps more interesting is what looks like an independent version in O’Farrell’s Pocket Companion for the Irish or Union Pipes (c.1811-16). O’Farrell was a piper and this presumably represents a traditional piping version of the tune. I will give it here with a machine audio, as it may help us to understand the traditional harp version represented by the MS29 page 10 transcription dots.

I’m interested in the subtle changes to the flow of the melody each time through.

O’Farrell’s title is “Fly not yett”. This is a reference to the Thomas Moore song which uses “Planxty Kelly” as its air. Moore’s words begin “Fly not yet, ’tis just the hour / when pleasure, like the midnight flower…”. I think this is interesting to see Moore’s title being taken back into the tradition and supplanting the original title, even though the melody itself is in a traditional form and doesn’t correspond to Moore’s vocal version. We can see this same kind of thing in some of the tune lists from the 19th century Irish harpers such as Matthew Wall and Patrick Byrne, as well as in the repertory of pipers at the end of the 19th century.

One thought on “Miss Kelly”