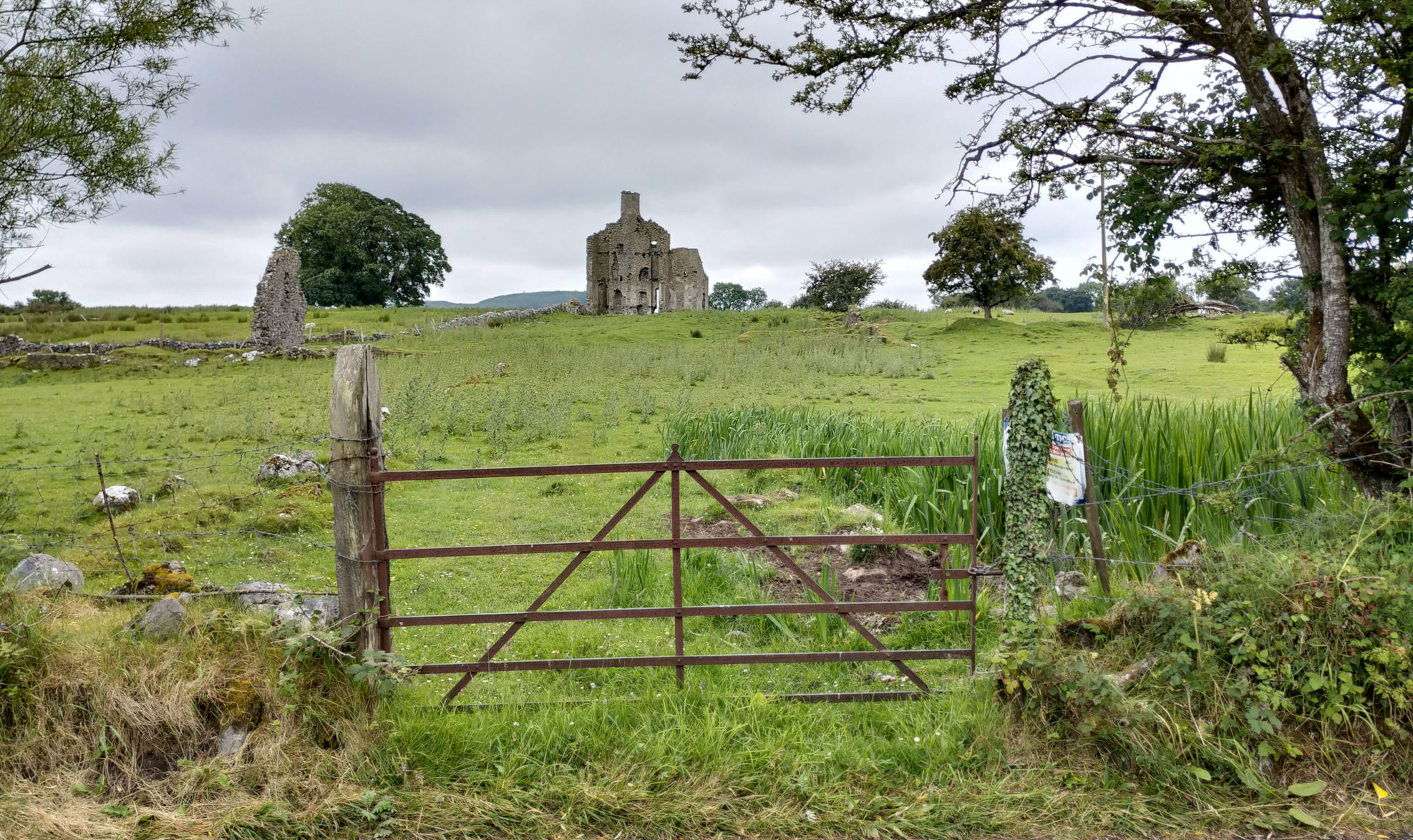 On the same manuscript page as The Beggar, Bunting also wrote what looks like a live transcription notation of the tune of Planxty Irwin (DOSC 59). You can see both of these tunes on Queen’s University Belfast, Special Collections, MS4.29 page 7.

Amongst the various things written on this page (full details in the Beggar post) Bunting has written “Planxty Irwin” at the top of the page, and then above the third section of notation (which is the start of our tune) he has written “Irvin or Kit”

You can download my PDF typeset version of this tune, which I used to generate the machine audio.

This notation seems fairly straightforward. Just like the tune of the Beggar, which forms the first two sections of this notation, our tune appears to have been transcribed one note higher than a likely harp key, and so my typesetting and machine audio sets it one note lower than the manuscript notation.

Bunting has omitted a bar line in the 3rd bar, so this single bar in the manuscript should really be divided in two. But we will continue counting the written bars. The first three written bars (after the double bar line in the second notated stave, which marks the start of our tune) form the first section of Planxty Irwin; other versions repeat this section to form an 8-bar first half to the tune. The final 8 bars form the second half of the tune without repeats. Bunting has got a bit micrographic in the last two bars and so he writes out a neat copy below, but as far as I can see this neat copy just repeats the same notes without changes, except for the dotting of the final two notes to lengthen them.

The double note at the very end of the tune is interesting and unusual in a transcription notation, and presumably reflects some kind of harmony or double note played on the harp.

Bunting made piano arrangements which are apparently based on this transcription notation. The first appears in his unpublished “Ancient and Modern” collection which I think was compiled about 1798. It is on QUB SC MS4.33.3 p.7. The title there is “Plangsty [kit] Irvin by Carolan” and the tune is tagged “from Charles Byrne County Leitrim / This is the poorest of Carolan’s Planxties”.

Bunting eventually published a piano arrangement in his 1809 collection, p.7. The title there is “Plangstigh Ervin / PLANGSTIGH ERWIN – PLANXTY IRWIN”. Much later, probably in the early 1840s, Bunting went back and added some extra information to his own copy of the printed book (ms annotation in BL Add ms 41508). At the top of the tune he writes “harp tune from Higgins / Carolan” and at the bottom he writes “from Thady Connalon in 1792 / Composed for Irwin of Streamstown House” and then in very light pencil, a lot of information apparently about “planxties” in general. I can’t read most of this on my photocopy of the page. There is other general “planxty” information written in pencil and pen on the facing (interleaved) page

As far as I can see there are no other independent versions of this tune, and all later knowledge of it appears to derive from Bunting.

In his annotation to the printed book, Bunting writes “Composed for Irwin of Streamstown House”.

Streamstown House is in Streamstown Townland, Achonry parish, Leyny barony, Co. Sligo. The ruins of the house include substantial grounds; you can compare the aerial photography with the 1836 six-inch OS map, which seems to show the house complete with its outbuildings and gardens. There is no access to the house but you can see everything clearly from the public road, where I took my photographs from.

Twice, Bunting writes the name “Kit” in association with this tune. I imagine this is the first name of the person that Carolan composed the tune for, perhaps Catherine Irvine / Irwin, or perhaps Christopher Irvine / Irwin. We could do some genealogical research into the Irvines of Streamstown to see if we can find such a person alive in Carolan’s time.

The information connecting this tune to the Irvines of Streamstown comes from Bunting’s annotation in the early 1840s towards the end of his life, when I think he was trying to revise and improve his 1797 and 1809 published books ready to re-issue them as companion volumes to the 1840 book. The project never happened; all we have is his annotated volumes which Karen Loomis discovered in the British Library in London.

Bunting doesn’t seem to have met Thady Connellan until 1808; he was travelling West in that year trying to meet scholars who could help him with the preparation of the 1809 published collection. He talks about hoping to meet Thady Connellan, apparently in Limerick, in 1808 (Annals p.219). Connellan was an interesting Sligo man who published a number of Irish language books in the early 19th century, including educational material and poetry including some of Carolan’s songs. You can see a portrait of him at Bonhams auction house. So was Bunting confused about dates? 1792 is a reasonable date for Bunting to have collected tunes from Higgins or Byrne. Did Connellan give Bunting this traditionary information about the tune after 1808? Bunting tags a couple of transcription notations of tunes as having come from Connellan in 1831 or 1833.

In his Memoirs, written around 1800, the harper and tradition-bearer Arthur O’Neill recalls visiting Streamstown house:

I next went to a Mr Ja’s Irvines of Streamstown County Sligo I am totally at a loss how to describe that Gentlemans manner of living at his own house and amongst his Tenantry, he had an ample fortune. He was an amateur, he had 4 Sons and 3 Daughters who were all proficients in musick, no Instrument was unknown to them, there was at one time a meeting in his house 46 musicians who played in the following order.
The 3 miss Irvines at the piano 3
myself at the — Harp— 1
Gentlemen — flutes — 6
Gentlemen — Violoncellos 2
12
Common pipers —10
Gent’n fidlers — 20
Gent Clarionets — 4
34
and –- 12
46
At the hour this Gentlemans customary meetings were finished, some Guests contiguous to their own places went home, but those who lived some miles off remained and in order to accommodate them Mr and Mrs Irvine lay on Chairs that night in the Parlour for my own part I never spent a more agreeable night either in bed, or out of Bed.

This James Irvine or Irwin would probably have been too recent to have been the subject of Carolan’s tune; maybe it was his father or grandfather. As far as I can tell, the spellings “Irvine” and “Irwin” are pretty interchangeable.

Confusion with Colonel Irwin of Tanrego

There is a completely different Carolan tune titled Colonel Irwin (DOSC 60), and a set of song words by Carolan addressing Colonel John Irwin of Tanrego. Donal O’Sullivan got these two tunes totally mixed up, and he applied the Irwin of Tanrego lyrics and title to our Irwin of Streamstown tune in his Bunting of 1932 and again in his Carolan of 1958. Unfortunately this mis-naming and mis-connecting of the tunes and attributions went into the tradition and are still there today. I discus this other Irwin tune and song lyric in my previous blog post on Colonel Irwin.

It is quite possible that Carolan composed a song addressed to “Kit” Irvine of Streamstown, which he sung to our tune. However I have not found any copy of such a song so at this stage all we have is the lovely tune. It is also possible that this was only ever an instrumental tune and that there was never a song to go with it.

As you can see above, Bunting tagged his piano arrangements of DOSC 59 “Planxty Irwin” with two different harper informants. In the 1798 collection the tune is tagged “From Charles Byrne County Leitrim” and in the early 1840s he wrote into his annotated copy of the printed books “from Higgins”.

I tend to put more trust in his earlier attributions, because I don’t know how much we can trust either his memory or his filing system for recalling details from near on 50 years previously. But we can also note that in my commentary on the Beggar I noted that this had its earliest attribution given to Byrne as well. So, do we then lean to imagining Byrne as the source for all the transcription notation on page 7? If so, do we understand that the transcription started as a continuous stream of dots, as Byrne (or whoever the informant was) played though the Beggar and then Planxty Irwin as a “set”? Could Bunting have started dividing the sections with a double bar line, and then realise there were two tunes, and insert the two titles above the start of each: “the Beggar” and “Irvin or Kit”? The Beggar is in G, and Planxty Irwin is in C, but the Beggar has no Fs and so both can be played with the harp tuned all naturals.

In my video demonstration from almost a year and a half ago, I did just this, playing through both tunes as a “set”. I repeat the first section of each tune. My playing in this video is very stilted as I am not using the traditional fingerings as collated and applied by Sylvia Crawford over the past year or so.

One thought on “Planxty Irwin”