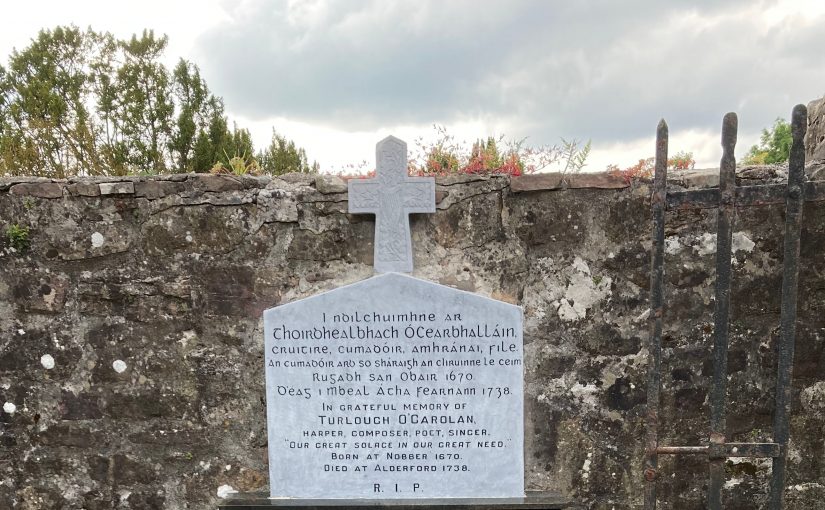 After I finished working on the tune and story of Eleanor Plunkett, I picked up on a reference from Alasdair Codona’s writings. Alasdair had pointed out that tune no.94 titled “Kitty Magennis” in Donal O’Sullivan’ Carolan the Life Times and Music of an Irish Harper (1958) was actually another version of the tune of Eleanor Plunkett. I added a comment to my Eleanor Plunkett blog post to include a facsimile of O’Sullivan’s source and a typeset and mp3 version.

I also noted that Donal O’Sullivan referred to a Carolan song lyric addressed to Kitty Magennis. However, I noted that this lyric really did not fit the melody of no.94. It has the wrong number of lines – in my original post I demonstrate how the full tune of Eleanor Plunkett including the usually-ignored second half, has a distinctive structure of half lines and whole lines which exactly matches Carolan’s lyrics addressed to Eleanor Plunkett.

I also noted that Donal O’Sullivan referenced a “variant” tune of Kitty Magennis written into a notebook by James Cody (Séamus Mac Óda) between c.1805-1809. However, O’Sullivan didn’t publish Cody’s tune, and as far as I can see, no-one else did ever, either. All I had to go on was Colette Moloney’s Introduction and Catalogue (ITMA 2000) p.199 which printed just the first four bars.

I went to Queen’s University Belfast to look at James Cody’s notebook, which is QUB Special Collections MS4.6. Our tune is on page 047 (olim p.38). Cody’s title is “Kitty Maginnis”, but he doesn’t give us any other information about the tune. I made a transcription for you of the tune:

Donal O’Sullivan (Carolan No.94) says this tune is “another version” of Mulholland’s, but I think that is not right. There are vague reminiscences in the way the tune turns, but the mode is different – this one is in G major. And the tune structure is very different too.

O’Sullivan refers to two sources for the words for Kitty Magennis. As I said before, these words don’t at all fit Mulholland’s tune, but that’s because Mulholland’s tune is a (mistitled) version of Eleanor Plunkett which has the distinctive uneven long verses of 18 short lines (or 8 long lines plus two half lines). Caitríona Rowsome (Complete Carolan Waltons 2011) tried to set the Kitty Magennis words from Ó Máille to the Mulholland tune. But we can instantly see that they don’t match, because she has to throw away three lines of Carolan’s lyric (lines 2 and 3 of stanza 2, and line 1 of stanza 3). The song of Kitty Magennis has three verses each of four lines, twelve in total; Donal O’Sullivan’s tune no.94 (being a version of Eleanor Plunkett) has 18 short lines (which can be mis-arranged as 9 long lines).

Patrick Lynch got a version of the words of Kitty Magennis from William Bartley in County Mayo in 1802, which you can see in QUB SC MS4.7.027:

Lynch also made an English translation which you can see at QUB SC MS4.32.024:

Tomás Ó Máille published a version of the words of Kitty Magennis in Amhráin Chearbhalláin p. 191. His title there is “Caitríona Ní’ac Aonghusa”; in his notes on page 314 he says that in his manuscript source, the words are “attributed to Carolan. The style resembles his”.

I would emphasise that we don’t have a matching text and lyric from the same tradition-bearer. Sometimes we can find that in these early sources; sometimes Lynch’s text from Mayo in 1802 can be matched to a melody transcribed live by Edward Bunting from the same informant on the same trip. Other times, we have both tune and lyrics side by side in James Cody’s rough notebook from 1805-09. But we don’t have either of those in this case.

Who was Miss Kitty Magennis?

Donal O’Sullivan discusses these lyrics (Carolan vol 2 p.59-60, under no.94) and points out that the title and lyrics show us that the song is addressed to Catherine / Kitty / Caitríona / Caiti, who was the daughter of Arthur Magennis.

There are many different spellings of the surname; the family seems to be centred on south County Down. Wikipedia gives Mac Aonghusa as the correct Irish form, and lists lists Magennis, Maguiness, Maginnis, Magenis, McGinnis, and McGuinness as Anglicised versions. John Grenham adds MacGuinness, Guinness, MacNeice, and MacCreesh all as variants. Because Catherine is the Daughter of Art Mac Aonghusa, I think the proper form of her name would be Caitríona Nic Aonghusa; in Ulster this becomes Nig Aonghusa.

Arthur seems to be a very common first name amongst the Magennisses (perhaps most famously Arthur Guinness the brewer), so that doesn’t help us narrow down which Magennis lineage Catherine may have been the daughter of. Mike Billinge and Keith Sanger discuss a harp made by Cormac O’Kelly in 1711 for a Captain Arthur Magennis of Cabra, who was around at the right time. His wife was Catherine née Hall; I don’t know if they had any daughters, and if so whether one might have been called Catherine after her mother. It would be a great story….

In his notes on no.94, Donal O’Sullivan references an anecdote about Carolan not visiting a Mr Magennis. (Carolan 1958, vol 1 p.49) “Carolan was once staying with Mr. Maguire of Tempo, and his host suggested that they should ride over to Mr. Magennis’s for dinner.” But Carolan decided to head back to Ballyfarnon instead and so didn’t go to Mr Magennis’s house. We are not told Mr Magennis’s first name, or where he lived, so I don’t think this is particularly useful, though it does remind us that there were Magennisses across Ireland and not just in their heartland of County Down.

At the moment I am not finding other versions of the tune. I think that it is possible that there may be other versions of the tune out there under different titles; Catherine Magennis was her maiden name, and the poem is one of those songs advertising her eligability for marriage. So I think it is quite possible that a version of our tune might appear under her married name, “Mrs _____” or “Kitty _____”. It is also possible that it may appear under some kind of honorific or aristocratic title such as “Lady ______” or similar. It could also be titled from a fragment of the lyric, such as “Uaisle na h-Éireann” (Noblemen of Ireland) or something like that. Or it might appear somewhere under a completely spurious title.

I am a bit suspicious about Cody’s competence at music notation, and so we might have to squint at his notation to find a different version of the same tune.

Donal O’Sullivan presents two pieces of evidence connecting the words to Carolan. First, Ó Máille’s source manuscript attributes the lyrics to Carolan. Secondly, O’Sullivan says that the first line of stanza 2 in Lynch’s version, matches one of Carolan’s songs for Denis O’Conor (no.122). Its a pretty generic line but I suppose it could be one of Carolan’s “stock phrases”.

Neither of these is conclusive but it seems fairly plausible that this is a Carolan lyric.

If we believe Cody’s tune of Kitty Maginis is the appropriate tune to Carolan’s lyrics, then is this a previously unknown and unpublished Carolan tune? I have added a note to my Carolan Tune Collation Spreadsheet.

Many thanks to the Arts Council of Northern Ireland for helping to provide the equipment used for these posts, and also for supporting the research beind this blog post.

One thought on “A previously unpublished Carolan tune: Kitty Magennis”