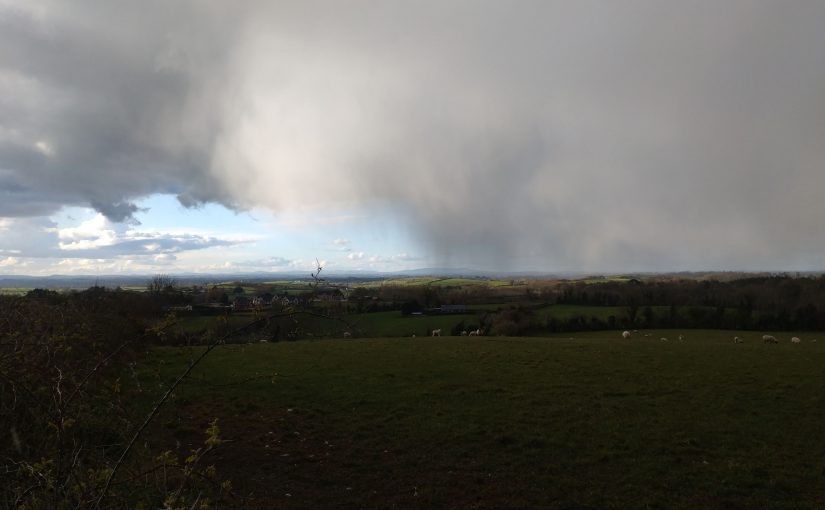 These notations are very interesting. The song tune and lyrics especially is perhaps unique in Bunting’s manuscripts. In this post we will look at what he has put in his collecting pamphlets, and collate this against other versions of the song, and try to say something useful about the tune and Bunting’s notation of it.

The song version of Codladh an tSionnaigh is written onto four pages, that is two double openings, into Queen’s University Belfast, Special Collections, MS4.29 pages 14/14/023/f6v through to 17/17/026/f8r.

Here’s the first opening, on pages 14-15. Bunting has not written any title; someone else (perhaps in the 20th century) has written a pencil title for the tune, “The Foxes Sleep” at the head of both pages of this opening.

I think we might have three or even four layers of writing on this page.

I am thinking that perhaps a possible first layer might have been a sketch, perhaps even a live transcription dots layer. The only place I am seeing anything like this is at the end of the first line where there are deleted notes. But I would emphasise that this doesn’t really look like Bunting’s live transcriptions. I haven’t made a machine audio of this because I can’t really see it, and it might not even exist.

The next layer I think is represented by the rhythmic notation. You can see that this includes the triplet “3” and the minims, and is well spaced out with clearly written notes. It is possible that this was the original initial layer, copied from a manuscript or printed book.

The next layer is over-written, and is a kind of simplification of the rhythmic notation. You can see the note stems pointing the opposite way, and some bars have numbers of dashes above these slow regular notes. I think the text is meant to go with this layer of notation.

Finally Bunting has started again making this regular even notation at the bottom of the page, though he only seems to do half the tune.

Anyway, he obviously gives up on this page, and turns over to pages 16-17 to make a neat version of what he is thinking.

This notation has a phonetic Irish text underlaid against the notation. At the top and bottom of both staves is a partial English translation of the ltrics, and there is what looks to me like the Irish title, overwritten (or underwritten) with the English text at the top of page 17: “Collin T[inni]”.

There could be a repeat mark in the middle of stave 2 but my machine audio plays straight through without repeats.

I have put three flats into the key signature, because I think the tune is written here in E♭ major. This is not a harp key and so presumably that narrows this down to being either a vocal version, or copied from a book or manuscript.

The text underlaid against the notes is very interesting. It is very unusual to find the text and tune of an Irish-language song set together like this from the 18th century. The Irish text is written in phonetics:

There is also a curious loose sheet apparently in Edward Bunting’s hand, which you can see at QUB SC MS4.26.10a. It contains two independent phonetical versions of the song text, with the stressed syllables marked with over-scores. The first is headed “Colla in Tinney (foxes slee[culear] / Sleeping Fox)” and the second is headed “a repetition”. At the bottom is written “The words seem to have been / composd only for the sound – / little intelligence – / drinking &c. – perhaps there / is some meaning not conveyd – ”. The back of the sheet has extended quotations copied from classical and antiquarian authors about ancient bardic music.

Other versions of the words

Patrick Lynch collected apparently identical words from an informant in 1802, but I don’t know who that was. You can see his rough copy (perhaps his field transcription? I am not sure) on QUB SC MS4.26.19an. The last line, and the correct spelling of “Deir”, are written more carefully in a finer pen, and I wonder if they were added later.

On the previous facing page, Lynch has made an English translation. The title is added in pencil, perhaps by Bunting:

I don’t know where the songs in this pamphlet derive from. You can see if you browse the facsimile that there are 42 pages. Upside-down on the final page is written “Mr. Lynch Loughin Island”

Lynch copied these words into one of his neat presentation manuscripts, which you can see at QUB SC MS4.10.105.

Edward Bunting made what looks like a live transcription notation from the performance of a harper in the 1790s. It is titled “Variation to Callun Oinney” and we can recognise it as a kind of variation to our tune. It is written after the end of the tune of Mailí bheag Ó which I have already written about, and all of the other text on the page refers to Mailí Bheag Ó and not to our tune.

I have put f♯ in the key signature for this variation. It is in G major which is a normal harp key.

Bunting’s piano development of the tune

Bunting made a piano arrangement of the tune and he published it as no.2 in his 1797 collection. If you want to listen, you can hear Fiachra Ó Corragáin playing this classical piano arrangement. You can see that Bunting has basically used the rhythmic notation from MS4.29 pages 14-15, and has tweaked the tune and added nice classical piano accompaniments. His title there is “Colladh an tsionnaidh The Foxes Sleep”.

I note that Bunting’s piano arrangement is set in E♭ major, just the same as the original notation in MS4.29 p.14-15.

Almost half a century later, right at the end of his life, Bunting wrote into his own copy of the 1797 printed book, against this tune, “Harp Hempson”.

Attribution to a tradition-bearer informant

At face value, we could believe Bunting’s early 1840s annotation, and think that he got the tune from Denis O’Hampsey. We know that Bunting visited O’Hampsey at his home in Magilligan in 1792 and again in 1796, and so we could suppose that either date is possible for this tune.

But, if we assume this is true, what did Bunting actually get from O’Hampsey? It is hard to say. Perhaps the phonetic words (Bunting didn’t have Irish), and perhaps also the English translation. Perhaps also the initial layer of notation on pages 14-15, whatever that was. But I am not so sure. Bunting’s live transcription dots are normally much more squashed together. Are these notes spaced out because he decided to try and take the words as well? I don’t think he ever tried to transcribe words and music like this anywhere else.

Or did he already have the neat copy of the tune from somewhere else – an old book or manuscript perhaps? Did he try to write O’Hampsey’s words over the top of a pre-existing copy of the tune?

I think the phonetic nature of his words means he must have got them from dictation.

What about Lynch? He was only working for Bunting in 1802-3. We know that Lynch got a couple of song texts from O’Hampsey; but I don’t understand what this pamphlet (MS4.26.19) that contains our text and translation represents. MS4.26 contains a number of loose pamphlets, some from Lynch and some from other people. MS4.26.2 contains neat versions of a few song texts collected by Lynch from O’Hampsey. MS4.26.46x is a list in Lynch’s handwriting of the names and ages of people living in and near Magilligan, dated 17th March 1803. The list includes “Dinnis a hampsy of Ballymaclary – 100” and “his wife Nanny Dougherty – 66”.

Could Lynch have also got our words from O’Hampsey? That could explain why Lynch’s words match Bunting’s text so well. Or did Lynch get his words from someone else? Or did he work from Bunting’s phonetics, to reconstruct the correct Irish?

Is there a connection to the Weaver’s lamentation which is also text and tune together, and also seems to have a Magilligan provenance?

And what about the variation?

We can look at my Tune List Spreadsheet and my MS4.29 index pdf to see how the two notations (p.14-17 and p.148) sit with relation to other items in the different pamphlets that were later bound up into the composite manuscript.

If we check my MS4.29 index PDF we can see that the two openings with the phonetic words and tunes are part of a four- or eight- leaf pamphlet starting on page 13. The other items in this pamphlet don’t seem to have clear attributions; a few might be from Byrne and a few might be from Higgins. But there aren’t any other O’Hampsey attributions in this part of the manuscript.

The variation on page 148 sits on the same page as Mailí bheag Ó, and seems to have text relating to Mailí bheag Ó written around it. Was it taken down in the same transcribing session from the same informant? But we don’t have any information about who was Bunting’s informant for that tune. Other tunes in this group of pages have very tentative or speculative Arthur O’Neil attributions.

Donal O’Sullivan, in his Bunting part 1 (1925-6) p.6-7, lists some early published variants of our tune. But as far as I can see they are all tunes that are copied from or heavily influenced by Bunting’s 1797 published book. I haven’t seen any independent witness to this tune or to the lyrics.