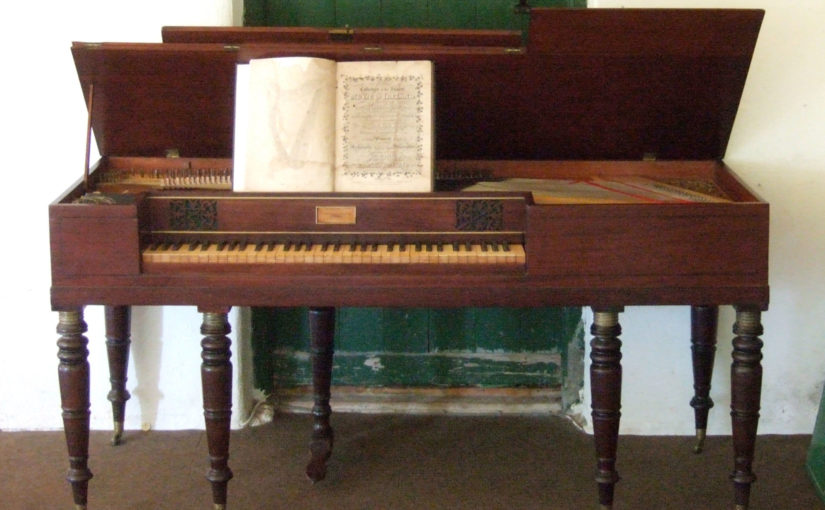 Edward Bunting wrote a song with a full piano arrangement into one of his collecting pamphlets, probably in the summer of 1792. I was going to silently pass over these pages as part of my Old Irish Harp Transcriptions Project, but I thought that actually this is an interesting enough thing to do a post about it.

The pamphlet is now bound up as Queen’s University Belfast, Special Collections MS4.29. Page number links below take you to the online facsimiles at QUB.

The song is in a section of the manuscript which seems to have been created by Bunting on a collecting tour in Summer of 1796, when he travelled North-West from Belfast, to Crumlin, Coleraine and Magilligan.

Page 179 has a dots-only transcription of our song tune, with no other information. The title at the head of the page, “Mrs Kiel Magilligan” bears no relation to this song; it is a reference to the tune of Madam Keil / Eleanor Plunkett, which Bunting noted on page 172 from the harper Denis O’Hampsey in Magilligan.

I think we would be hard pressed to do anything with these dots if we did not have the full piano arrangement on the following pages.

The piano arrangement follows straight on, on the next three pages.

My machine audio plays the verse five times, so you can sing along with the words, transcribed here from the piano score (verse 1) and from page 183 (verses 2 to 5):

[Bill Leather]
As for Mr Steele, he’s a very good man,
but he trusted his Beef Boys into a rogues hand,
his name to the Paper, he signed with a pen
but for to pay the Beef, boys he ne’er did intend.

2. [B.L.]
Unto the plantation , I durst go no more
for fear of Mc fadein that Ravenous Boar
for if he could, get us; without some releif
he surely would eat us as he eat up steeles Beef

3. [B.L]
Bad luck to Mc Fadein I wish he was dead
in the midst of the night he sits up in his bed
he eats the fat Beef, gives the lean to his son
to his poor wife & Daughter, he throws the Bare Bone

4. [Mrs. Mc. Fadein]
augh, Paddy Dear paddy do not eat so fast
or a very short time, the Beef it will last
[Mr McFa]: Oh say no more Betty then Paddy did say
When the sun’s in the north all the Beef I will pay

5. [Mr. McF]
+ now my Dear comrades I must bid adieu
tho I’m the first going you’ll soon follow too
But I ll look out for places as well as I can
For Russel + Wallace + Bold Bob MacCann

You can also download my PDF typsetting of the entire tune and lyrics which I used to generate the machine audio.

At the head of the piano arrangement it seems to say “The Weavers Song of Lamentato”. I am not 100% convinced that “Weavers” is the correct reading; I don’t really know if this is the title of this song or not. But for now it will do. Anyone with a better reading or a better idea, let me know.

I think “Bill Leather” is not a title, but is the name of the character who speaks the first three verses. Later verses are headed by the names of other characters who speak them: Mrs. Mc. Fadein and Mr. McF.

Where did Bunting get this from? The only contextual information is possibly the writing of the title “Mrs Kiel Magilligan” at the top of the transcription page. This title connects these pages with the harp tunes collected from Denis O’Hampsey. We can wonder if Bunting was just randomly jotting titles and information, or if there is some semantic connection between the title of Mrs. Kiel, and our song air. Is it conceivable that O’Hampsey was the source of the song tune and words?

Or, is the connection more tenuous – did Bunting make this notation on the same trip, somewhere else? He would have stayed at the houses of the local gentry while he was on the road. Did one of his hosts play this on the piano in an Anglo aristocratic drawing room setting?

Did Bunting make the piano arrangement or was it based on his informant?

Why did he start with a dots transcription?

What is this song? I have yet to find any other version of it that might give us a clue as to its origins. I don’t think Bunting did anything with it apart from this notation.

I think it is kind of interesting as it shows us that QUB MS4.29 is not the narrow focussed pure source of untouched harp tradition that it is sometimes held up to be.

2 thoughts on “The Weaver’s Lamentation”