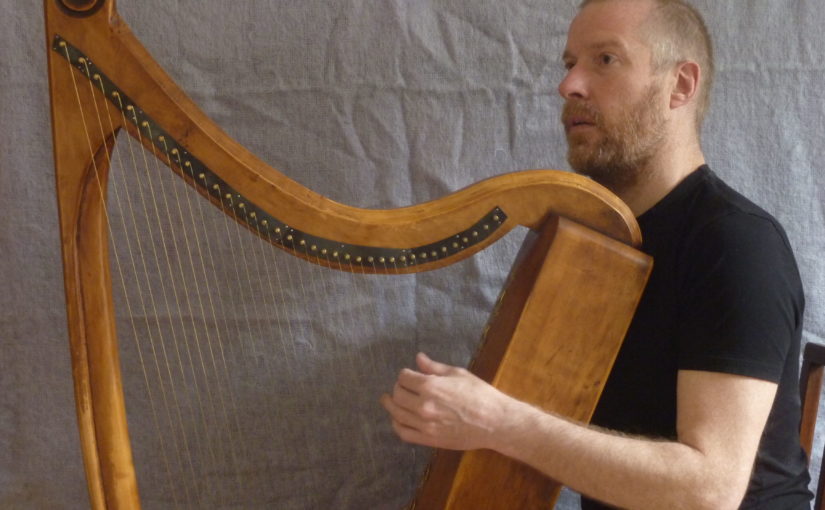 I made a demonstration video of Mable Kelly by Carolan, played on my copy of Carolan’s harp. My performance is based on Edward Bunting’s edited field transcription, apparently taken from the playing of the old Irish harper Hugh Higgins, perhaps in 1792.

Bunting’s notation of the tune was written into one of his little pocket collecting pamphlets, now bound up in Queen’s University Belfast, Special Collections, MS4.29 (see my index and text transcript). Mable Kelly is on QUB SC MS4.29 page 78/74/083/f36v.

The next page of QUB SC MS4.29 page 79 contains a tune list headed “From Hugh Higgins”, and then the next 11 pages contain 5 tunes also tagged as being collected from Hugh Higgins.

In Bunting’s annotated copy of the 1809 printed book (British Library, London, Add.41508 p.48), he has written “Harp Linden”, implying that he collected the tune from Patrick Linden. However, these tags in the annotated prints were written in the early 1840s, almost 50 years after the old harpers played for him, and I don’t know how reliable these tags are. While Linden may well have played this tune, and Bunting may have transcribed it from Linden’s playing, I think the transcription in MS4.29 p.78 looks from its context to be more likely from Higgins.

For more on Higgins’s life and music, see my write-up of Tá mé mo chodhladh.

Bunting writes an interesting commentary in the annotated 1809 print:

This tune presents the anomaly of being in D♮ minor while the harp was tuned in high bass key (or key of C♮) The 4th tone from C. (F) being left out all through. This method of Tuning and arrangement of key viz: D minor happening very often

Bunting sets the 1809 piano arrangement in D minor with one flat in the key signature; he puts a natural accidental on every single B in the tune. Also he puts in quite a few F passing notes.

We can understand the tune as being not in D minor, but in D neutral pentatonic mode. D neutral is related to C major, and uses the notes D, E, G, A, C. This tune does include passing Bs and also there is a passing high F in the MS4.29 transcription, at bar 23, as well as the problematic low F in bar 25.

Understanding the layers of notation

I think MS4.29 page 78 highlights some of the serious problems of understand Edward Bunting’s notations of the old Irish harp music. It seems clear from studying the manuscript page, that this notation originated as the dots transcribed live from the playing of an old harper.

We can compare it to, for example, Brighid Óg on QUB SC MS4.29 p.64/60/069/f29v which presents the process nicely on two facing pages, starting with the live dots transcription, and then proceeding to the addition of note stems and beaming to indicate rhythmical groupings lower on the page, and finally on the facing page 65 a complete edited and “improved” version of the tune. As I discussed on my blog post about Brighid Óg, I think that the facing-page copy has been edited by Bunting as the first step of him progressing away from the live transcription of the traditional performance, towards his polished classical piano arrangement(s).

For Mable Kelly, I think that all three of these stages are superimposed one on top of each other.

The biggest problem area for me, is bar 25 (first bar of the 4th system on page 78, numbered bar 1 of section 4 by Bunting). The rhythm of the tune doubles in time, and there is a very intrusive F. In my demonstration video I have silently omitted this F – the only change I have made to what is written. I am not entirely convinced by the double-time passage; does it represent Bunting’s flawed attempt to capture some kind of florid melismatic harp flourish? Bunting himself seems not to understand or believe what he has written – when he publishes the tune in 1809, he ignores his own bars 25-6 and just copies the passage given by Neal.

We also have the four-note rising fragment on page 79, with a .$. mark indicating it should be inserted in between bars 23 and 24 (labelled by Bunting bars 7 and 8 of section 3). The paler ink looks similar to the F-A-B-C rising motif in bar 25 – are they both later inventions? Yet bar 25 is not crushed in – why did Bunting leave so much space if this is not what was played? Or did he write the initial live transcription dots scattered all over the page like in Brighid Óg, leaving him plenty of space to insert newly composed bridging material?

Because the layers – live transcription dots, rhythmic explanation, and creative compositional development – all overlay each other, we have to be very careful here.

I don’t really believe that Bunting “gets” the traditional style; I think he is always working towards developed piano arrangements, and so I am very suspicious and basically I don’t believe any of his arrangement choices.

But I am playing this demonstration video for you anyway, even though I think it is corrupt, because I also think that this notation does give us some very interesting and beautiful old Irish harp style and idiom.

The reason I think this is a harp performance transcription rather than a song version is not just the D neutral pentatonic mode which fits the harp modes, but also that there are bass notes marked in. “B” has been written below bars 6, 26 and 29, indicating most likely that those notes are played an octave lower, with the right (bass) hand. In each case the bass note is C (in bar 29 the sequence E-D-C), which is interesting since the tune seems to be in D neutral. The notes of a D neutral scale are D-E-G-A-C-D and so there is a clear relationship with a C major pentatonic scale, which can give rise to a “double tonic” effect as the tune switches between a home sonority of D and an away sonority of C.

Bunting does not write any time signatures on p.78, but the tune is clearly in 3 time. However there are a significant number of bars which have four beats in them – bars 6, 16, 26, 28, 29. (bar 16 has 3 beats but is followed by a pickup onto bar 17). I notice at once that all of the bars with the B bass-note markings have four beats. We could also wonder if bar 16 might have had one of the repeated Ds as a bass note (though I don’t play a bass note here in my demonstration). We might also have to count bar 23 as having 4 beats if we insert the little .$. fragment there.

I am thinking that these extra beats in some bars might represent the way that traditional musicians will hold certain notes, stretching the time or rhythm of the tune. Mary Harvessy does exactly this in her singing of Seabhac na hÉirne.

Perhaps related to this is the way that three-note pickups are sometimes written with two semiquavers and a quaver (e.g. at the end of bar 1), and sometimes written as a triplet (e.g. the pickup before bar 1). Other places have three quavers without a triplet mark. I wonder if these also represent different ways of bending and flexing the rhythm of the tune in an old traditional harp style.

Bunting made different piano arrangements of Mable Kelly, though only one was published.

Bunting made a piano arrangement in his unpublished 1798 piano manuscript, QUB SC MS4.33.3 p29-30, titled “Maible og ni Ceallaigh or Mable Kelly by Carolan”. He marks a repeat sign for both the first half of the tune and the second half of the tune. Bunting also makes a more florid piano arrangement for his 1809 published book (page 48), titled “Mabla sheimh ini Cheallaidh – Mild Mable O’Kelly”

There is an earlier published setting of this tune, in John and William Neal’s “Colection” printed in 1724, p.14. It is titled “Mable Kelly” and is not attributed. The Neal version curls a bit differently from the Higgins version noted by Bunting. I think that Neal’s versions of tunes are arranged for baroque violin. Bunting had a copy of the Neal book – the only known surviving copy of Neal 1724 is in Bunting’s papers at Queen’s (QUB SC MS4.31). Bunting also had access to another, damaged copy, from which he copied tunes into his collecting pamphlets, on the pages immediately preceeding where he wrote Mable Kelly. (QUB SC MS4.29 pages 67-77)

There is another early copy of the tune in Pádraig Ó Néill’s manuscripts, written in the 1790s. “C Mable Kelly” is set in G neutral. Ó Néill was a piper and so I suppose it’s possible that this is a piper’s version of the tune. it goes too high for fiddle. I think the “C” is Ó Néill’s shorthand for attributing the tune to Carolan.

Mable Kelly is no.73 in Donal O’Sullivan’s Carolan. He says (vol 2 p. 44) “…we have no less than seven airs for persons named Kelly. It has been a matter of some difficulty to sort them out…” I am not convinced that all his claimed associations are correct; we also have to accept the possibility of confusion in the 18th century tradition. O’Sullivan lists a number of versions of Mable Kelly (DOSC 73), starting with Neal (which is the basis for his own edited version of the tune), Mulholland (copied from Neal’s version), and Bunting. He also references versions in the Pigot & Forde mss. I have not seen these.

O’Sullivan also mentions (Carolan vol 2 p.47) two different traditions of the song’s composition. Hardiman (vol 1 p. liii) says that the tune was composed for Mable Kelly at Castle Kelly, Co. Galway, though this is a bit of a throwaway line in a convoluted story. Tomás Ó Máille (Amhráin Chearbhalláin p.271) reports a tradition that it was composed for “one of three handsome daughters of Kelly of Cargins”. Bunting writes in the annotated 1797 print (p.11) that one of the other Kelly tunes, Planxty Kelly (DOSC 71) was “composed for the Kelly’s of Cargins in the county Roscommon”, and his transcription on QUB SC MS4.29 p10 calls it “Miss Kelly”. Perhaps Bunting, or one of his informants, was confused, or perhaps Carolan composed a different song and air for each of the three handsome daughters.

Beneath the notation of Mable Kelly (DOSC 73) on page 48 of the annotated 1809 print, Bunting writes:

This tune was much esteemed by the harpers, it is very wild and from its construction so different from others of Carolans, that we must attribute it to some of the harpers prior to his time, OCaghan, Scott or one of the Connallons

However, I think we can accept this as a Carolan tune because of the tag in the manuscript transcription (presumably from the harper Higgins) and because of Ó Néill’s “C”. And also, because there is a song to Mable Kelly composed by Carolan. There is a version of the song text in Hardiman 1831 vol. 1 p. 60 which begins “Cia b’é bh-fuil sé a n-dán do, a lámh-dheas bheith faoí na ceann”. The song addresses itself to “Máible shéimh n-í Cheallaigh” which matches Bunting’s 1809 printed title “Mabla sheimh ini Cheallaidh – Mild Mable O’Kelly”. Tomás Ó Máille (Amhráin Chearbhalláin p.109) prints it as the very first song in his book, and says in the notes on p.271 that it “is considered the best of Carolan’s poems”.

However, it seems to me that our manuscript transcription from Higgins is a harp instrumental version, and not a song air version of the tune. It is possible that one of the Pigot ms version may be a sung version of this tune. We should check these out.

One thought on “Mable Kelly by Carolan”