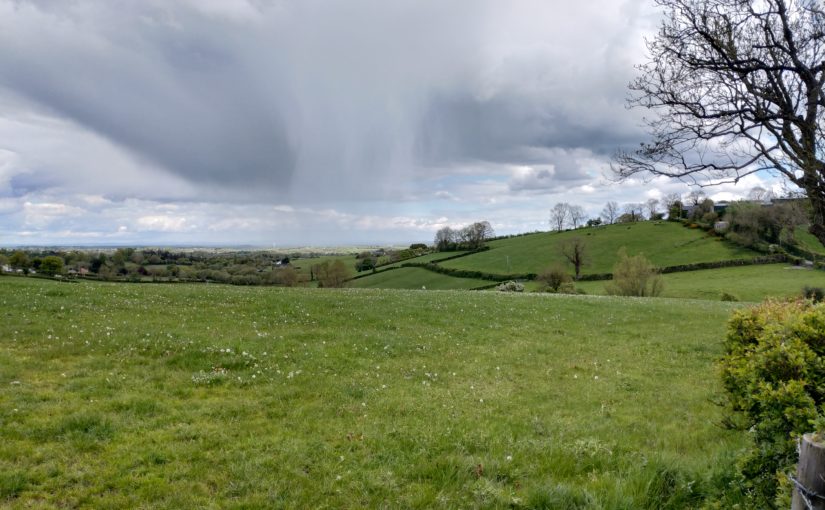 Edward Bunting made what looks to me like a live transcription notation of the tune of Casadh an tSúgáin, probably in Summer 1792. He writes 50 years later that he took this down from the harper Rose Mooney, but I don’t know if we can rely on his memory. Anyway, the transcription notation is very interesting and presents a very lovely version of the tune with a lot of what I assume is old Irish harp idiom and style in it.

The transcription notation is on the first two lines of Queen’s University Belfast, Special Collections, MS4.29 page 4/4/013/f1v. Immediately below, on the third and fourth line, Bunting has made a neat copy, with big carefully-drawn note heads and neat barring. Then on the next page, he has made an even neater copy, using numbers above the staff to count three beats in every bar. He also writes the S sign to indicate a repeat of the second half (“second part repeated”), and he finishes by writing some alternative passages for some sections: “second time”, and “sung this way”.

However the principle of my Old Irish Harp Transcription Project is to be suspicious of Bunting’s neat notations, since I really do wonder how much he was already tidying up, adjusting and de-traditionalising the tune in preparation for his published classical piano arrangement. My idea is to focus on the first transcription “dots” which I believe are our best chance of seeing beyond Bunting to the performance of the old Irish harpers who were his informants.

You can download my PDF typeset version which I used to generate the machine audio.

My machine audio plays through the first two lines, as written, but shifted one note down (see below). You can see that the barring and note values are a bit erratic. You can also see that, while some of the notes are the live transcription dots which have been expanded with note stems and beams, other notes in these first two lines are heavily over-written. You can especially see underneath the C of “Caussein” there are underlying transcription dots, with the later heavy over-written notes in top of them. I assume that elsewhere the underlying dots have been obliterated by the large later note-heads. I don’t think we can do anything more to understand this unless we were able to do imaging work on the manuscript page.

At the top of page 5 above the neat copy he writes “Shela na Conalon very old” but that is the title of a different tune and is unrelated to our notation – perhaps it was information provided by his informant at the time, or perhaps he later used a space space at the top of the page to note a scrap of information.

Bunting’s title for this notation, is “twist the suggin / Caussein Hugh gan / whistleing Bird” written at the top of page 4. We can recognise it as Casadh an tSúgáin, which means twisting the hay-rope. I don’t know what the significance of the whistling bird is.

Bunting’s development of the tune

We can see a process of development, where Bunting starts by making the live transcription dots, presumably whilst listening to the traditional musician informant in the summer of 1792. He over-writes his heavy notes over the top of some of these bots, obliterating them. Then he moves to the bottom of the page and writes a neat copy; then he switches to the next page and makes a more formal neat copy including repeat indications. I don’t know how soon after the listening session this might have happened; minutes, or weeks?

In the May 1796, Bunting went to London to deposit some unpublished sheets of his classical piano arrangements in order to claim copyright on them (see Peter Downey, Edward Bunting and the Ancient Irish Music…, Lisburn 2017). A classical piano arrangement of this tune, titled “Cassadh an tSugán mé”, was on page 3 of these sheets, and it is this inclusion that suggests that the transcription was done in 1792.

In Autumn 1797, having made more new piano arrangements to augment the earlier ones, Bunting published his first Collection. The same classical piano arrangement from the May ’96 sheets is included as No.19 in Bunting’s 1797 book, titled “Cassadh an tsugan mé – The twisting of the rope”.

These classical piano arrangements are clearly derived from Bunting’s neat copies of his original dots transcriptions in MS4.29 page 4 and 5.

I think after the publication of his 3rd Collection in 1840, Bunting started re-working his first two books. He died in 1843, before he could finish, but his copies of the 1797 and 1809 collections with his hand-written corrections and annotations were discovered by Karen Loomis in the British Library. Against the tune of Casadh an tSúgáin, Bunting has written “Harp Mooney”, but it is hard to know how seriously to take this. Did Bunting have a clear enough memory of his collecting activities 50 years before, to be able to associate this tune with Rose Mooney? Did he have other tune lists that we do not have?

Donal O’Sullivan (Bunting Part I, 1926, p.65-68) discusses the well-known song lyrics and story about the twisting of the rope, and points out that there are many variants of the words which are sung to many different tunes, and says that the song continues to be “extremely well known in Connacht and Munster”.

It is possible that Bunting’s harper informant was singing as well as (or instead of) playing the harp, given the tags on page 5 “sung this way”. But we are given no clue as to which set of words the harper may have been singing, out of all of the multitude of related song lyrics.

O’Sullivan doesn’t find any other versions of this particular tune (except for Thompson’s 1816 version which is likely derived from Bunting’s 1797 piano arrangement). So unless we can find a traditional performance using this melody, I think that Bunting’s transcription notation is our only witness to it.

I think it is clear that the tune we have here is not at all connected to the song air which is sung and played nowadays under the title “Casadh an tSúgáin”. I can think of two possibilities; the first is that a variant of the same song was sung to our tune by our harper informant, or at least was commonly sung in the 18th century. The other possibility is that Bunting has got the title wrong. I wonder if the title of our tune is “Whistling bird”, and he has merely written “Casadh an tSúgáin” on page 4 as a reference to a different unrelated tune, in the same way that he has written “Síle Ní Chonnalláin” on page 5. The fact that Bunting carries the “Casadh an tSúgáin” title through into his piano arrangements is not that compelling given how we know how unreliable he can be.

If we could find a version of this tune with a different title that could answer some questions. We should also collate all the other tunes related to the modern one, and the other tunes listed by Donal O’Sullivan.

Right back at the beginning of this project, before I had even thought of writing up each tune, I made a video of this tune in October 2019. Because I had only just had the idea of playing through the manuscript transcriptions, I didn’t have a clear sense of how to understand the notations; my performance here combines readings from the neat copies which I would try not to do now. You can also see that this was before I took on board Sylvia Crawford’s insights into playing techniques.

2 thoughts on “Casadh an tSúgáin”